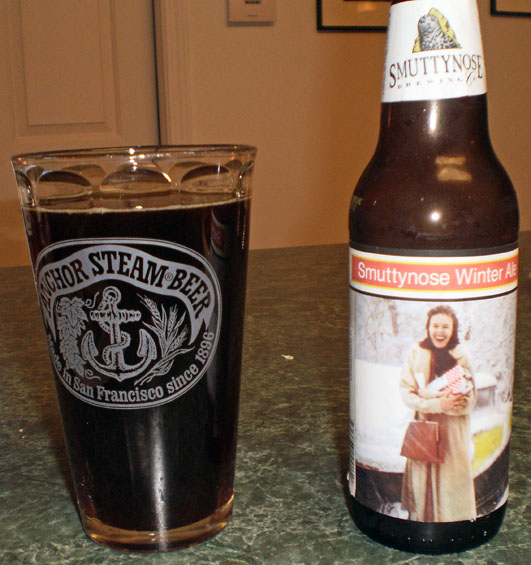 Another fine effort from the Portsmouth, NH, based brewery.  I'm definitely developing an affinity for Smuttynose, and a certain level of trust that anything they put out will be worth grabbing on a whim.  But their winter ale struck me as a bit of a surprise--a sort of "tweener" when it comes to its style, and--get this!--a winter beer that, according to the website, "contains no spices."

But that's okay, as there's a good amount of flavor that comes to the Smuttynose Winter Ale from its Abbey Ale yeast and Dark Belgian candi syrup.  Classified as a dubbel, the yeast and syrup make sense and function nicely together here.  It's not a particularly strong beer at 5.83% ABV, but the Winter Ale also never struck me as weak for the style or thin in body.

Smuttynose Winter Ale actually reminded me of 21st Amendment's Fireside Chat, a "winter spiced ale" with some awesome artwork on the can and packaging.  Well, I liked the Fireside Chat more than the average reviewer, and that wasn't necessarily from its spicing--it had an appealingly sweet malt profile that I think is replicated to some extent in Smuttynose's Winter Ale.  The sweetness here is sort of fruity, in the traditional dubbel style.  Doesn't strike me as a holiday beer, really, but I found it enjoyable and certainly wouldn't shy away from another in the future. 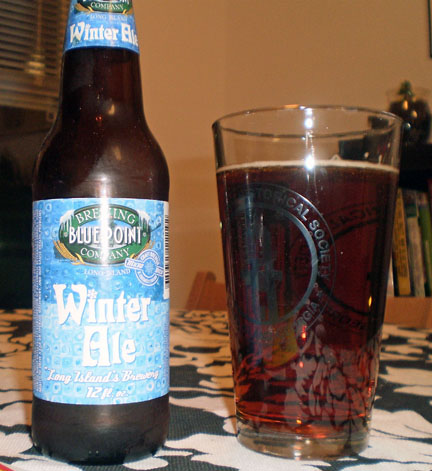 Here's another pleasant, solid winter seasonal, but even more so than the Smuttynose, Blue Point's Winter Ale especially doesn't strike me as a special holiday beer.  Heck, they could call it Shamrock Ale and put it out as a spring seasonal for St. Patrick's Day and it would fit the bill.  At 7% ABV it provides a nice little warming element for the chilly weather, but this is classified as an Amber or Red Ale, not spiced up for the season.

Give this beer to me with a different label, though, and instead of lamenting what it's missing, I could focus on the things that are working well.  There's a particularly nice maltiness going on here--I tend to like the way malts are in the forefront in this style.  According to Blue Point's website, "it’s created with pale, Vienna, crystal and chocolate malts."  I enjoyed the caramel and toffee notes created by the malts here, but I guess I'd just like to see a little more going on.  The balance is solid, the mouthfeel a little thin, but there's nothing inherently bad about this beer; it's just kind of ordinary, and a strange choice to be released as a winter seasonal.

The Verdict: Two pleasant, inexpensive beers--one more unique and fitting for the season--both of which I'd be happy to enjoy again.  But neither will end my winter beer hunt prematurely, let's put it that way.
Posted by Masticating Monkey at 12:33 PM