Weekend Drink Pick: Smuttynose "Finestkind" IPA (with a bit on the Montague Bookmill) 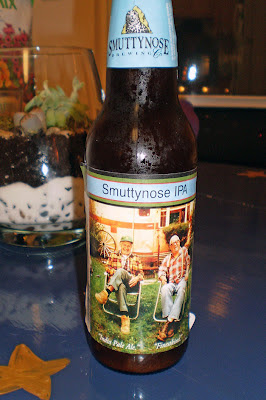 The IPA is a beer style for all seasons, really, but sometimes I wonder what season it's best suited for.  Some of the heavier, higher-ABV versions can be nice and warming on a chilly spring or fall night.  But maybe just because I drank more IPAs this summer than ever before, I think the IPA is a brilliant alternative to some of the lighter beers associated with steamy afternoons and stuffy nights: the wheat beers, the Belgian whites.

This especially goes for a pleasantly, but not overly-hoppy, IPA with some citrusy overtones, like the Smuttynose "Finestkind" IPA, which I tried for the first time in early August on tap at the Montague Bookmill's Lady Killigrew Cafe, and for the second time by bottle earlier this week (where it still fit nicely against the backdrop of cooler temperatures).


The Montague Bookmill is a perfect imagining of the classic New England bookstore, the kind you don't expect to actually find in real life.  It's nestled against the banks of the Sawmill River about half an hour north of Amherst, but it was no easy task for us to find it after meeting up with K's longtime friend, H, and her daughter at the Magic Wings Butterfly Conservatory in South Deerfield.  Our map was confusing, and our GPS led us to a closed road somewhere in the wilds of Montague.

It took some old-school guidance from a cop I accosted at a gas station in Montague (I wonder: is being able to give good directions to lost travelers at the top of the job description in a town like this?)--the old, "Take a right at the third stoplight, go up the hill and around a couple curves, then you'll see it on the right across from the general store," which somehow, amazingly worked. 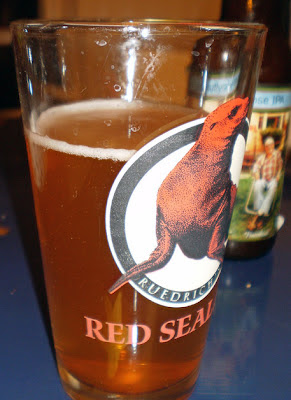 By this point, I was equal parts drained and relieved, and when we walked into The Lady Killigrew Cafe and I saw the Smuttynose IPA on tap, I knew it was the right time to try this beer for the first time (no matter the fact that it was the middle of the afternoon, at lunch with my fiancee's mother and a toddler).  This was a fine decision.

With a backdrop of the Sawmill River just outside the windows of the cafe, and the musty charm of a used bookstore across the hall, the Smuttynose IPA hit the right spots on a warm summer afternoon.  Having a chance to take it in more studiously at home last week, the Smutty showed that it wasn't enjoyable simply as a byproduct of its environment in the first sitting.

I've developed an affinity for IPAs with strong citrusy flavors, especially ones where grapefruit seems the most prominent taste (I've found this to be the case with the Southern Tier 2XIPA and Great Lakes' Lake Erie Monster).  An overwhelmingly bitter hop wallop isn't necessarily what I'm going to love in an IPA, and even though the Smuttynose IPA clocks in at 75 IBUs, the aftertaste isn't terribly harsh.  There's enough flavor here that this beer can stand up well to a spicy dish, but I could also see it overwhelming milder cheeses, so be judicious in your pairings.

It's hard not to let good times cloud your opinion of food or drink.  And I certainly would recommend nursing one or more Smuttynose IPAs while sitting in the window of The Lady Killigrew Cafe and hammering out pages of a novel--something I fantasize about doing, if only the Bookmill weren't a couple hours away and my novel wasn't growing cobwebs.  But this is a beer also enjoyable when served at home, by the bottle, no matter the weather.  A beer for all seasons, indeed.

Montague Bookmill photo by Flickr user bunkosquad, used under a Creative Commons attribution
Posted by Masticating Monkey at 11:16 AM