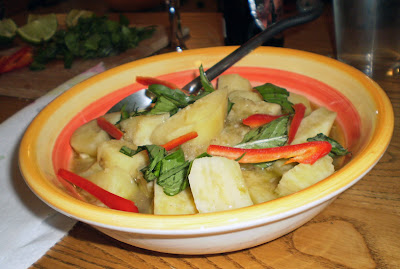 I've mentioned previously how I was kind of sheltered as an eater for the first, oh, two-thirds of my life.  Stuffed cabbage was exotic.  Enchiladas were super-exciting.  This was small-town life in the '80s and '90s, and I didn't know anything different.

Just like my first bite of legit pastrami was a come-to-Jesus moment, so too was my first taste of Thai curry.  I remember it pretty clearly.  This was eight years ago to the month: I was in Pittsburgh, my first couple weeks of grad school, wandering through Oakland with a few of my new "colleagues," if you will, before attending a reading.  It started raining, and I, the foolish boy from California, was woefully unprepared.  I ended up sloshing my way into Lulu's Noodles, a cheap and decent Asian fusion place in between the Pitt and Carnegie Mellon campuses.

It was the perfect time to try a bowl of curry for the first time, and I seriously remembered thinking this was the best thing I'd ever eaten.  You know how some websites have "What's your favorite food?" as a security question?  Yeah, I had a new answer.  I assumed back then, and a long time after, that curry was impossibly complicated and difficult to make.

I was wrong.  Whether you're making the curry paste yourself or getting a good one out of a jar, it's not really that hard.  Which is why it feels particularly egregious when you get a lousy one out at a restaurant. 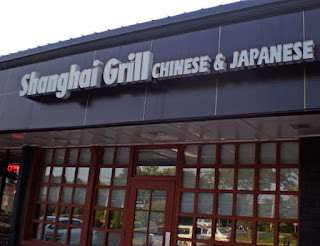 It took a surprisingly long time for K and I to try our first taste of Thai food in the Capital Region, and when we did, it was at the Asian fusion restaurant Shanghai Grill in Latham.  I have to admit, I'm always leery when an Asian restaurant has more than one type of cuisine on the menu (Chinese and Thai, for instance); if a white guy had come up with that idea, you might call him racist--you know, "They're all the same, they can make it all!"  That kind of thing.

At Shanghai Grill, where the prices seem a little hefty, I suppose to reflect the Latham neighborhood, we were in the mood for Thai.  K went with the Thai Red Curry Chicken, while I had the Thai Lemon and Chili Chicken (both $13.95).

Maybe Shanghai Grill does a better job with their Chinese offerings.  Maybe the sushi is damn good, worth the high prices.  But honestly, I don't know that I'll ever stop in to find out.  If a place can't make a decent curry--especially for $14--I don't trust them on those other things.  Here's the best way I can describe the disappointment of the meal: K said afterward that she was "offended" by her meal.  You can trust her opinion on these things, and she is certainly not one given to hyperbole. 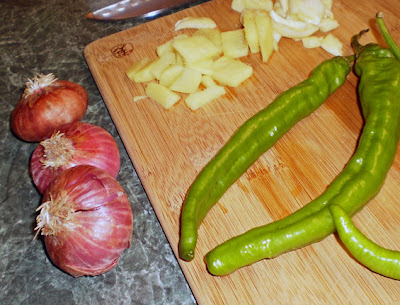 Basically, we got the same exact two dishes, except mine included what tasted like lemon juice from a bottle.  Not what I was expecting, and kind of nasty.  The curries suffered for both of us because of the omission of two critical ingredients: coconut milk and fish sauce.  As I said before, it's hard to screw up Thai curry.  Leaving out those two ingredients is the best way to achieve that dubious goal.  The lack of coconut milk meant the texture was off, not so creamy, and the taste wasn't nearly as rich and bright as it should have been.  It was a goopy base of water thickened with corn starch.  Fish sauce is harder to pinpoint in a dish, but it's a key part of the umami of curry--basically, bringing all the flavors together and then elevating them in terms of their sharpness.


No, there was nothing particularly sharp, or good, about our meal at Shanghai Grill.  Fortunately, I already had the ingredients at home for another curry--the Sweet Yam-Tamarind Curry with Basil and Lime from Lynne Rossetto Kasper and Sally Swift's new book, The Splendid Table's How to Eat Weekends. 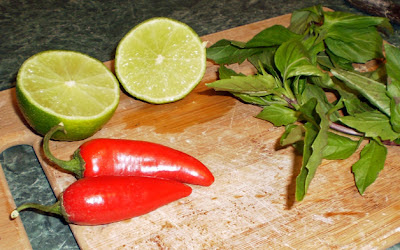 I could go on for days and days about how much I love Lynne (it feels like we're on a first-name basis at this point) and her radio program, The Splendid Table (not available on public radio for most in the Capital Region, but available for free download and streaming from the website and iTunes), but this post is already beyond long-winded, so I'll save that for another time.  And trust me, there will be another time.  Instead, just cook this recipe and download an episode of her show and just try to convince me you're not a fan.  Ain't gonna happen!

It took a pretty quick trip to the Asian Food Market on Colvin Ave. in Albany to load up on the ingredients needed in this dish.  It's not an unreasonable amount of ingredients for a curry, yet it still packs a wallop of flavor, even with the Lite Coconut Milk from Trader Joe's in place of the full-fat version.  Also, Lynne recommends (in this book and elsewhere) the Three Crabs version of fish sauce.  We hadn't stocked up yet since moving to New York, and found the Three Crabs at the Asian Food Market.  I think it's good.  Very fragrant.  Lovely bottle, too, that you can proudly display on the counter.  Have fish sauce out and guests will know you're legit. 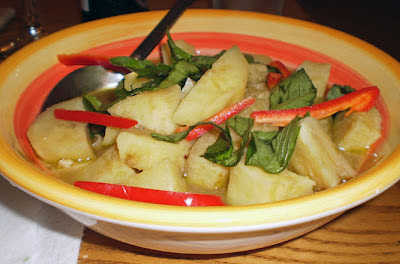 1. In a food processor, puree the chiles, ginger, shallots, garlic, and salt until blended and smooth.

2. Trim away the tops of the lemongrass stalks up to about four inches from the bottom.  Remove the fibrous parts of the stalk until you reach the heart.  Trim away the heart and slice, then mince very finely.

3. In a six-quart pot, heat the oil over a medium flame and add in the curry paste from Step 1.  Stir and saute for about 3 minutes.  Blend in 1/4 cup of the coconut milk, reduce the heat to medium-low, and continue cooking for five minutes or until the curry paste is sauteing in the coconut milk's oil.  Be careful not to burn.  Blend in the yams, lemongrass, fish sauce, and tamarind, along with the remaining coconut milk and enough water to just barely cover the yams.

4. Adjust the heat so the liquid bubbles slowly.  Simmer uncovered for 15 minutes, or until the yams can be pierced with a knife but still have a little resistance.  Simmer for 10 more minutes and taste for seasoning.

5. To serve, transfer curry to a bowl, squeeze lime over it, and scatter with the basil leaves and sliced peppers.
Posted by Masticating Monkey at 12:20 PM

Email ThisBlogThis!Share to TwitterShare to FacebookShare to Pinterest
Labels: Eating in, Eating out