One of the best things about moving to a new place--and actually staying in that place a while--is having the little eccentricities of the area unfold gradually before you.  Now, I don't know that I'll ever spend enough time in Vermont to learn what it's really like up there, but I get the sense that it's a place with some real character.

The most recent example of that for me?  Reading on the website for Woodchuck Hard Cider that the name of the brand came about because "the Vermontiest of Vermonters are sometimes called 'woodchucks,'" and that seemed a fitting name for their small-batch, Vermont-based cider.  Two things: 1) I kind of like the idea of being called a woodchuck, and 2) What does it mean to be Vermonty?

We'll see if I ever learn the answer to that question, but for now I'm enjoying some of the fine products Vermont has to offer: to go with some of the Vermont-based cheese I picked up from the Washington County Cheese Tour, I drank a bottle of the Woodchuck cider.  And not just any cider of theirs, but a bottle of their "ultra-limited edition" Private Reserve Belgian White.  Sounds awfully special, eh?

In fact, this is a pretty special cider.  I'll admit, I'm not the kind of beer snob who will thumb his nose at ciders or fruity beers--in fact, if the taste of fruit seems real, I'll probably be into that tartness or sourness (one example: New Glarus's shockingly good and hard-to-get Raspberry Tart, called a "Wisconsin framboise").  A little sweet, too?  Fine by me, as long as it strikes a good balance. 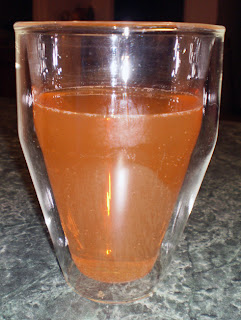 The unique thing about Woodchuck's Belgian White is that it's a cider brewed with Belgian beer yeast.  I'm an avowed Belgian beer nut, so when I saw a single of the Woodchuck for sale recently at Oliver's Beverage in Albany, I had to make it part of my mixed-six.  And it was well worth it: this is a cider whose apple notes, with some of that sweetness and sourness, are present, but I most struck by the complexity of the Belgian White compared to other ciders.  That yeast adds a little bit of funk, and the orange and coriander are noticeable, almost as much so as in some of the better Belgian white beers out there.

These flavors all melded well together, and this cider served as a fine complement to the cheeses, especially the Dorset from Vermont's Consider Bardwell Farm.  With the warm weather lingering on into mid-September, the Woodchuck Private Reserve Belgian White Hard Cider makes for a mouth-puckeringly refreshing treat, definitely worth grabbing if you spot it.
Posted by Masticating Monkey at 11:49 AM