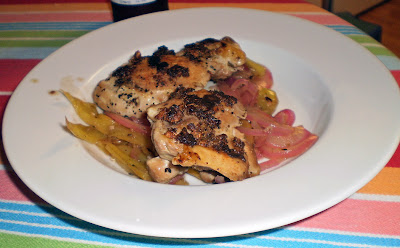 It's been 25 years since the publication of Mexican food authority Rick Bayless's first book, Authentic Mexican.  I was pretty young back in 1987, subsisting mostly on grilled cheese sandwiches, but I recall that the Northern California town I was growing up in was hardly a hot-bed of interesting food options.  It's not that way anymore.  And in so many other ways, the changes to our food-consuming culture have been swift, not so unlike the advances made in technology over that time.

But have we really seen significant jumps in how we think of and consume Mexican cuisine in America in that time?  In the introduction to Authentic Mexican, Bayless writes, "Most Americans don't even know well-prepared Mexican-American foods.  Their unhappy experience is often limited to some mass-produced takeoff on the Southwest Traditional at a Chi Chi's or El Torito's or whatever the regional chain restaurant is called.  Mexican-American food seems to...have become a near-laughable caricature created by financially-savvy businessmen-cum-restaurateurs who saw the profits in beans and rice and margaritas."

In the last quarter century, I don't think that's changed so much.  Chi-Chi's might have gone bankrupt in the U.S. in 2004, but not for lack of demand.  Taco Bell may be trying to class up their joints by bringing celebrity chef Lorena Garcia into the fold, but it's not like their food is any more authentically Mexican (cilantro: so exotic!)--or, apparently, any better.  More cities are featuring hole-in-the-wall authentic Mexican eateries and groceries, like La Mexicana in Schenectady, but while these places often feature excellent tacos, their menus are generally pretty limited.  More often than not, enjoying food at many Mexican restaurants is related to the amount of margaritas you drink during the meal.

I've been fortunate over the years to eat some good Mexican and Mexican-American food, thanks to friends and their parents and grandparents, and the luck of discovering randomly awesome places in towns like Springfield, MO, and Boone, NC.  Still, my knowledge of real Mexican food doesn't run that deep; when I come across a recipe like Chicken Thighs with Vinegar, Oil, and Aromatic Spices (Pollo en Escabeche) in Authentic Mexican, I can't help but be a little surprised.  The ingredients and flavors here aren't what most of us associate with Mexican food.  No cilantro, even!


This cookbook was a great little find.  Helping some family friends clear out their basement in preparation for a garage sale, Authentic Mexican was buried and dusty, ready to be sold off for a quarter.  I have another of Bayless's books, Mexican Everyday, but this new one--his first book--goes deep into explaining the background of these Mexican dishes and ingredients in an old-school way.  No photos, only sketches (of everything from bottles of Mexican beer to instructions on how to make corn tortillas) by John Sandford.

While this recipe, including the Yucatan Mixed-Spice Paste part of it, includes lots of ingredients and steps, one of the nice things about the changes in our food culture since the initial publication of this book is that the ingredients needed in most of these recipes are often readily available at the supermarket.  And there isn't anything too challenging included in the recipe; a little brute force in grinding the spices into a paste, and the ability to roast a few peppers is about as hard as it gets. 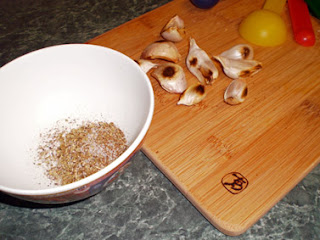 And the result?  Some tender chicken in a tangy sauce, with a few cups of delicious chicken broth left over.  Throw in some cooked, chopped chicken and cook up a couple veggies, and you'll have a second meal--probably the best chicken soup you've tasted in a while.  But you're on your own for that part of things.

1. Roast the unpeeled garlic on a skillet over medium heat for about 15 minutes, or until it's blackened in spots and very soft inside.  Turn frequently until it's ready.  Then let cool and peel.

2. Measure the black pepper, allspice, cloves, cumin, and oregano into a mortar and pestle or spice grinder.  Grind and blend.  Move to a small bowl and then add the salt.

3. Mince the garlic.  Dust it with some of the spice blend and then use a spreader or the back of a spoon to blend it into something of a paste, as smooth as possible.  Add the remaining spice mix, then add the cider vinegar and flour and blend.

4. Cover and let stand for hours or even overnight.  Bayless adds in his notes, "(The spice paste) keeps well for months, but should be refrigerated." 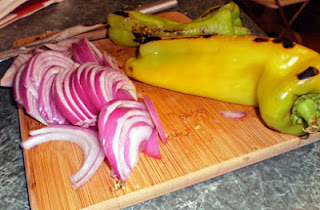 Note: I used skinless chicken thighs and used less oil than the recipe called for (3 tablespoons instead of 1/4 cup); the spice mix still held tightly to the chicken, which browned nicely.

For simmering the chicken:

For finishing the dish:

1. Simmering the chicken: Bring 7 cups of water to a boil in a large pan, then add the chicken (making sure it's covered).  After a few minutes, add the black pepper, cumin, oregano, bay leaves, salt and garlic.  Partially cover and simmer for 23 minutes, until the meat is tender.  Remove thighs from the broth and let them cool on a plate.  Save that broth!

2. Once the chicken has cooled, rub 1 tablespoon of the spice paste on one side of the chicken (the skin-on side, if you've got it).  Let stand for 1 hour, uncovered.

3. Finishing the dish: Lightly dust the spice-covered side of the chicken with flour.  Pat gently and try to evenly distribute over the chicken.  Set a large skillet over medium heat and add the oil.  When hot, lay the chicken thighs in and cook until lightly browned and a crispy, if there's skin on, about 4 minutes per side.  Drain on paper towels.

4. Return the pan to the heat and add the onion and peppers.  Cook for 4-5 minutes, stirring occasionally, until the onion softens.  Add the cider vinegar, 2 cups of the reserved chicken broth, and remaining 1/2 tablespoon of Yucatan Mixed-Spice Paste, stirring to dissolve the paste.  Simmer several minutes to blend the flavors.  Taste for salt.

5. Place 2 thighs in plates or shallow bowls.  Top with a combination of the onion/pepper mixture and broth, and serve.
Posted by Masticating Monkey at 12:57 PM