Note: This is the first in a series in which I'll be comparing food I've eaten out in restaurants to similar dishes at home.  Usually, it'll be a comparison to something I've made; in this case, it's between a restaurant dish and a frozen entree.

Agree?  Disagree?  Feel free to add your thoughts in the comments.

There are times when I wish I were a more spontaneous person.  I think it's always been in my nature to be a little nervous, a little squirrelly, when it comes to making decisions.  Just give me a few minutes to think about it!

But this part of my disposition has only increased in recent years, probably corresponding with the increase in reviews at our disposal on the internet.  Moving here and there so much over the past decade has contributed; not since we were in grad school in Pittsburgh did K and I really have go-to restaurants that we could head to on a whim.  These days, this is pretty much how our conversations go when we decide we're in the mood to go out for a meal:

Me: This place has some good reviews.
Her: Oh, I was just looking at those.
Me: Daniel B. likes it.  That's a good sign.
Her: Oooooookay.  I guess that works.

We've done this enough that I finally decided, upon moving to Albany, that I'd start posting on Yelp.  We'll see how that goes.  I am very proud of the two early "cool" votes. 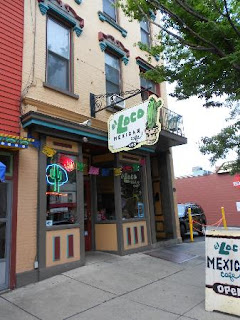 But one night, only a couple weeks into our relocation, we decided to eschew the reviews, the Yelpers, and just drive out to Lark Street and wander around.  Surely we'd find something, even if we couldn't vet the place first.  And we did have a few choices, places we still need to check out: Kinnaree, the Dutch Pot.  Instead, we chose El Loco Mexican Cafe, just around the corner from Lark, on Madison.

We wanted to like El Loco.  We wanted to be reminded that spontaneity could pay off.  The place is cute, the decorations unique, the music loud and the patrons enthusiastic.  The menu has some exciting points, straying a bit from the boring Mexican-American fare of a lot of similar places.  Ancho chiles used in several dishes?  Sounds good.  Tamales?  Chicken mole?  Yes, please.

That's what we went with, the Tamales con Puerco (pork) and the Chicken Mole Negro.  But first, we started with the chips and salsa, even though it felt slightly criminal to have to pay $3.25 for a basket of chips and one little tub of salsa.  It felt especially bad after we tasted the chips: they were made in house, but tasted sort of stale.  I don't think it was staleness, though--I think they just weren't cooked long enough to actually be crispy.

It was pretty busy in El Loco at this point, around 8 p.m., and the narrow restaurant was too small to contain the over-loud shrieking and laughing from a table near us.  You can forgive the restaurant for that, of course, but the service was awfully slow and it would have been nice to have someone notice our empty water glasses.

That could be forgiven, too, if only the rest of the food were good.  And unfortunately, it wasn't.  The tamales were too sweet, big balls of cornmeal with a little pork tucked inside.  The veggie-chili garnish helped add some good flavor, but there wasn't enough of it to go around (and I'm pretty conservative when it comes to condiment usage).
The Chicken Mole Negro, particularly considering the price ($15.50) was a huge let-down.  The description on the menu of the many, many things that go into their mole (too many to type, but including chocolate, ancho chiles, tomatillos and walnuts) was enticing, but it didn't really matter much when we saw how small the serving was.

On top of that, the mole was lacking salt, the one element needed to bring all of those interesting ingredients together.  Sure, they sound good on paper, but without much salt they were slightly bitter and not nearly as flavorful as they should have been.  And the chicken itself was kind of dry and flavorless, lacking in tenderness, also likely as a result of not being seasoned properly. 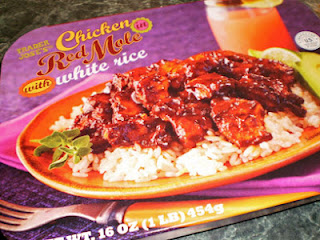 About a week later, the disappointment of El Loco's mole still fresh in my mind, I ventured out to Albany's new Trader Joe's, braving the crowds to stock up on some of my old favorites.  It's been several years since I've lived in the same town as a Trader Joe's, and I found that when lugging bags of stuff back one or two hours to home, I was less inclined to try out interesting new items; I'd be buying enough of those products I'd missed (along with bags of cat food for my spoiled beastie) that I didn't need to try much new stuff.

That's changed now that I can get to Trader Joe's in under fifteen minutes.  And that's why, when I saw their frozen Chicken in Red Mole for $5.99, I took the plunge.  I gave into spontaneity.  This time, it was the right call.

Trader Joe's mole was ready after just over five minutes of microwaving, and there was more of it, integrated in a most un-artistic way with some white rice, than what we received at El Loco.  The ingredient list here, too, was impressive, including ancho chiles, cinnamon, bananas, and peanuts.  Most importantly, it was clear after tasting Trader Joe's mole that it had been seasoned with an appropriate amount of salt.  Not too much, like some frozen or pre-packaged store meals, but just enough for all the flavors of the mole to shine.  It was rich and a little spicy, and the chicken itself was tender and flavorful.

Considering how much better and cheaper the Trader Joe's mole was than El Loco's, I'll take the crowds and lousy parking at Trader Joe's over the inattentive service at El Loco any day.  What it really comes down to, though, is the food, and I wasn't impressed with anything at El Loco except for one of the salsas at their salsa bar.  And that just isn't enough.

El Loco Mexican Cafe is located at 465 Madison Avenue in Albany.  Trader Joe's is located at 79 Wolf Road in Colonie.
Posted by Masticating Monkey at 11:23 AM

Email ThisBlogThis!Share to TwitterShare to FacebookShare to Pinterest
Labels: Eating in, Eating out, Trader Joe's