According to weather forecasts, today will be my first day in the Capital Region in which the temperature won't make it into the 60s.  More than any other season, summer is often distinct in how swiftly it's whisked away, how quickly it becomes a distant memory, something to pine for.  Some of this might be related to our recollections--recent or otherwise, as student or teacher--of returning to school in late summer.

I mentioned briefly in my first post for this blog that this is the first year in several that I'm not teaching any classes come fall.  And if you count grad school for the three years prior, this is the first September since 2003 in which I won't be ensconced somewhere within the walls of academia.  And that, along with the lovely weather we've enjoyed for much of this month, has me feeling somewhat adrift.  Where am I?  When is it?

Earlier this week I was thinking of doing a "passing of summer" post centered around the fine soft-serve ice cream at On the Farm (logical, considering how many times I've enjoyed it since moving here).  But in many ways it feels more appropriate to mourn summer's passing with a beer review for Long Trail's Double White Imperial Belgian-Style White Ale. 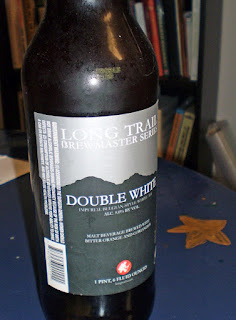 The Double White from Long Trail, enjoyed earlier this week with the windows cracked open to allow in just a hint of the early-autumn chill, was in fact the perfect white ale for the new season.  An Imperial White, the ABV is ratcheted up to 8%, and there's a comforting warming that comes with drinking the beer (especially because it's served in 22 oz. bottles as part of Long Trail's Brewmaster Series).

The higher alcohol content isn't the only thing that makes this witbier stand out.  The Double White is brewed with coriander and "bitter orange," according to the label, from orange peel.  I love the flavor profile of coriander and orange in beer, and was particularly intrigued by the bitter part of the equation here.  The difference from other white ales is noticeable; the sharpness of the orange peel hits your tongue on the first sip, and not in an unpleasant way.  The bitterness is reminiscent of that of orange zest that's been grated too close to the rind, but in this case it meshes well with the other flavors present. 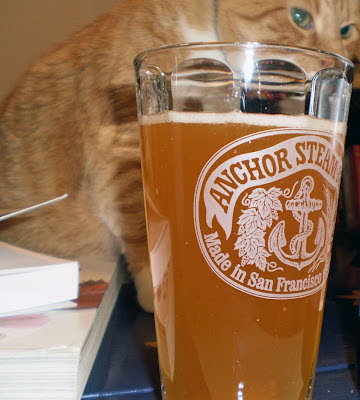 As you'd expect from the style--and not affected by the increase in alcohol--this beer is crisp and refreshing.  It's only released by Long Trail between April and August, and was reasonably-priced at Oliver's Beverage in Albany.  I'd suggest searching to see if it might still be on the shelves, as this is the perfect beer for trying to recapture the memory of summer while still getting a nice little warming kick.

Posted by Masticating Monkey at 11:28 AM