A Pair of Unibroue: Reviewing Chambly Noire and Trois Pistoles 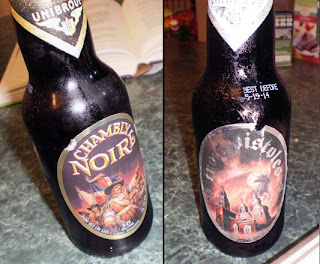 I remember the first time I saw the name Unibroue.  This was back in Pittsburgh, at a place called D's Six Pax and Dogz, where I'd be spending way too much time now if I still lived in that city.  Then, I didn't know what I had in my backyard; instead I just laughed and made very bad jokes about the name "Unibroue."

But these days, no more jokes.  Only love.  I discovered Unibroue for real a few years back when Trader Joe's was selling a Taster Pack, featuring 12 oz. singles of four different Unibroue beers.  I've only ever seen it in the Columbus, OH, store, but apparently it's out there at others, which gives me hope that one day we'll see it here in Albany.  Even so, you can find 750 ML bottles of La Fin du Monde at TJ's here, and good beer stores will also sell four packs of single varieties, which is how I got my hands on Trois Pistoles and the less-frequently-found Chambly Noire.

I've become something of a Belgian beer nut in recent years, but buying actual Belgians can get a little pricey, whether it's at a bar or at a store.  Unibroue, though from Chambly, Quebec, honors the tradition of Belgian brewing and puts out a line of authentic and delicious beers for reasonable prices.  Put on the spot, I'd say La Fin du Monde, their flagship beer, is my favorite, and--for my money--the one beer I would walk out of a store with if I could only grab one.  But sometimes I'm in the mood for darker Belgians, and those Unibroue also does exceptionally well. 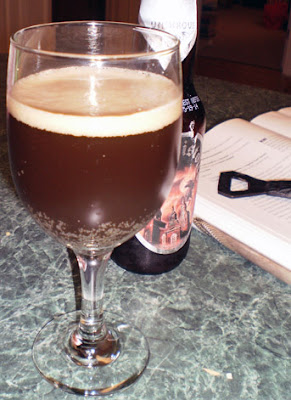 Trois Pistoles is classified as a Belgian Strong Dark Ale, and it is indeed strong--both in terms of the ABV, which is a somewhat-masked 9%, and the flavors, which are heavy in the aroma and taste of ripe fruits.  This is a gorgeous beer on the pour, as you can see above, with a thick head and vibrant level of carbonation, a result of its triple fermentation.

I like to drink this beer slowly and let the temperature warm--the flavors really do change as it loses its chill, with the taste of plums and raisins becoming more prominent.  I'd recommend this beer with strong cheeses and any kind of meat, particularly red, where its flavors can stand up and complement the food.  Trois Pisoles is a less-expensive version of the wonderful Chimay Blue--so good that when I have a bottle of each of these around, it's hard to decide which to drink. 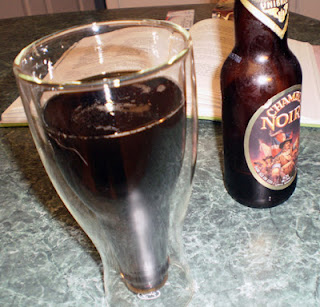 Chambly Noire is also a dark ale, but not strong in the ways of Trois Pistoles.  I'd never seen it before I found it on sale for under $6 for a four-pack at Total Wine earlier this year, but considering the quality of Unibroue beers, figured it was worth a shot.  And while Chambly Noire doesn't stack up to the other dark beers I've tasted from Unibroue, it is a lighter and still-interesting alternative.

Only 6.2% ABV, there's not really much alcohol present in Chambly Noire, and unlike Trois Pistoles, the flavor comes primarily from malts, not dark fruits.  In this way, it might actually be preferable to someone who doesn't care for the sweetness that comes from those dark fruit flavors in the classic stronger Belgians.  There's also a touch more bitterness and still some yeasty flavors, so this is a fairly complex beer.

You can't go wrong with either one, though, and if you're looking for ways to pair beer with food in a thoughtful way (especially for guests who might be more accustomed to wine pairings), look to Unibroue--especially the Trois Pistoles.  The bottles alone are enough to class up some joints.
Posted by Masticating Monkey at 12:24 PM