A Cheese Tour Addendum, or The Orange Ball 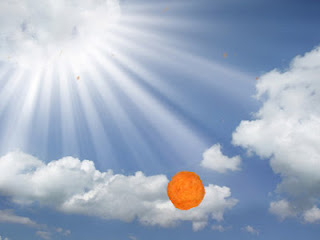 I mentioned this briefly in my first Cheese Tour post, but K and I weren't the only ones to come away with something splendid from our visits to the farms last weekend.  Mr. P (aka Peanut Aloysius J---) may not have partaken in our cheese eating (he prefers the low-fat cheddar sticks or string cheese from Trader Joe's), but he did get a new toy from the fine folks at 3-Corner Field Farm.

And oh, what a toy it is.  Made from the wool from their lovely sheep on the farm, I knew this would have the smell, the taste, the texture that would drive Peanut wild.
While waiting in line to taste and buy all the fine cheeses from 3-Corner Field, I wandered over to a baked goods table and found that there were also some cat toys for sale.  Most were gone, but there was this orange, cheese-puffy ball, available for only a $1 donation.  Now, I know Mr. P well, and I know how he likes to play.  This thing was right up his alley. 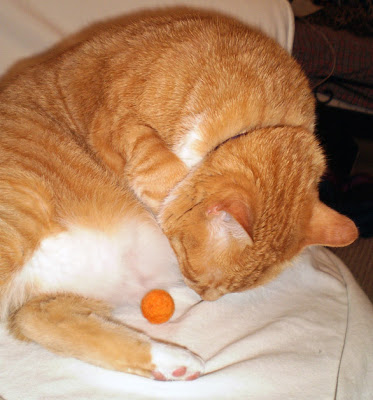 Before he could play with it, he had to do some good inspecting.  Nice color, right?  I'll admit, Peanut is a bit narcissistic; he's always been very fond of other orange cats who have come by our window to visit--always pleading with them to be his friend, only to watch as they walk away. 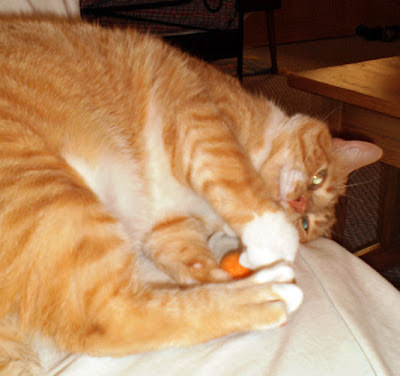 It was time to get a little crazy.  This ball was great!  There was something about the way it smelled, the way it tasted. 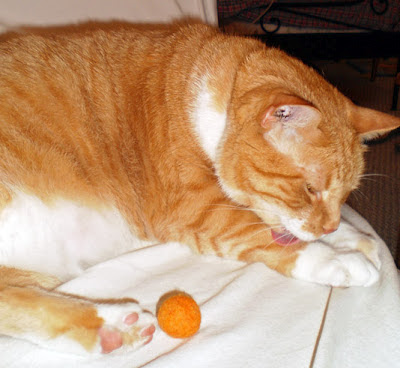 That wasn't enough.  He needed to take the ball down, knock it around on the floor.  Just as I suspected, not only would he love the ball for its wooliness, but because of how aerodynamic it is--a perfect sphere, just the right weight so he can bat it far enough that he can really get his chase on.  Mr. P may look large, and I'll admit it, he is--a hair under 21 pounds last time we checked--but he can move.  When he gets playing, watch out.

I felt sorry for our downstairs neighbors.  This was a buffalo stampede at midnight.  Ah, but he was so happy, who could care?

It was only a matter of days, though, before the unthinkable happened: his beloved ball was lost.  This wasn't much of a surprise, considering the way this ball moved, fast and into every corner of the house, but oh what a sad time it was for Mr. P without his newly-beloved ball. 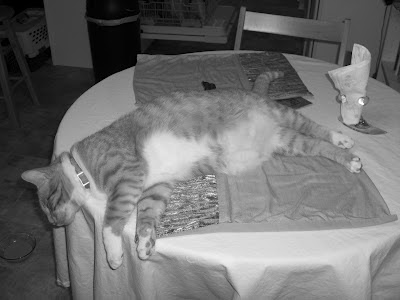 He moped.  I searched.  Hands and knees.  It wasn't a pretty sight, I'm sure.

But then, what was that?  Was that...?  Yes.  I found it.  It took a couple days, and then I stumbled upon it, just the shadow of the wool ball in a corner of the laundry room.

Somebody was so happy, and very protective of his returned ball. 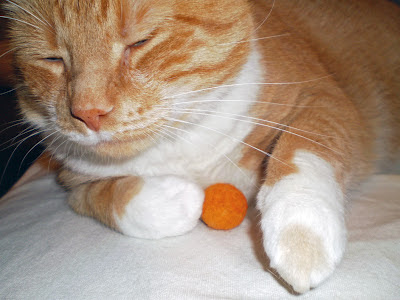 Until, of course, he lost it again.  And again.  Where is it now?  Good question.  I suppose it's time for another search to commence.
Posted by Masticating Monkey at 10:06 AM