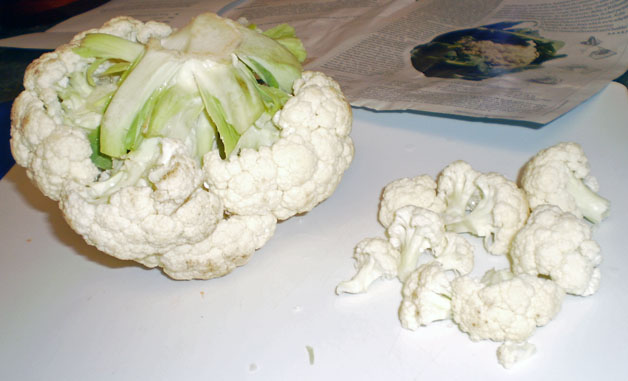 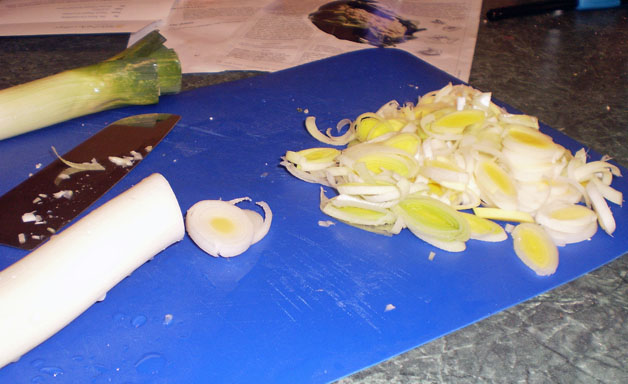 This soup, which originally comes from Fidanza's new cookbook, Saltie, is described by the chef as "a fancy version of broccoli and Cheddar," but it's also fairly rustic in the way the cauliflower is broken up into small chunks and the leeks are chopped up, and then a cup of parsley tossed in near the end.

New York Magazine adapted the recipe from Saltie, and I'll keep it the same except for one change, which you can take or leave depending on how I sell it here.  The recipe originally calls for a five ounce chunk of Gruyere, which is to be melted in the soup as it cooks, but I ended up making what at first felt like a bit of an embarrassing tweak: instead of picking up some good Gruyere, I decided to go with a processed (get out!) hunk of applewood-smoked Gruyere I found in the cheese section at Hannaford.

It was the potential for a little smokiness (and heck, the price difference didn't hurt) that appealed to me in that moment, and as it turned out, I was pleased with the decision.  There's something about the smoky flavor that plays off really nicely against the richness that comes from the cheese itself and the chicken stock and butter in the recipe.  These tastes pair well with the pleasant, mild flavor of the leeks--an underrated ingredient in American cooking, as argued here--and the slight nuttiness of the cauliflower. 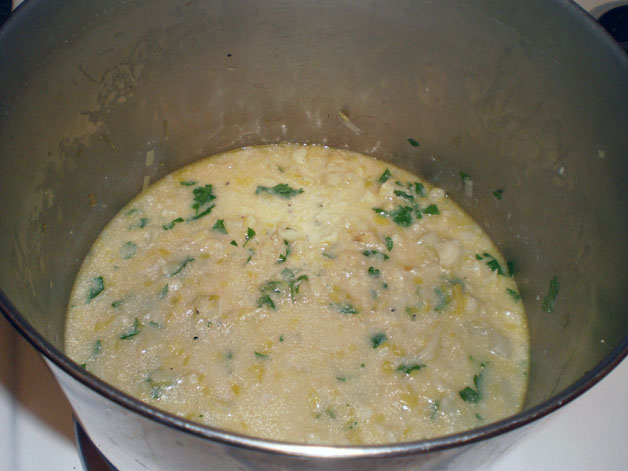 Every spoonful of this chunky soup not only packs a varied profile of flavors, but an enjoyable balance of textural elements as well.  The recipe calls for just enough liquid added to cover the vegetables in the pot, and once that reduces over the 20-30 minutes of simmering time, you're left with a product that's not too liquidy.

The recipe suggests breaking down the florets of the cauliflower into smaller florets; the first time I made the dish, I broke them down into very tiny pieces.  The second time I left them a little larger, which saved a bit of time.  Either way works.  And make sure to break apart and use as much of the stems as possible.  Nothing says rustic like some pieces of stem.

There's only so much I can say to sell this recipe.  It's good, it's simple, and I'm not going to bother to adapt the version from New York Magazine, other than the cheese idea.  It's getting cold outside; go ahead and introduce a new soup recipe to your repertoire.  And then if you get hooked on it, obsessed like Steinbrenner, you'll be totally justified.  Enjoy. 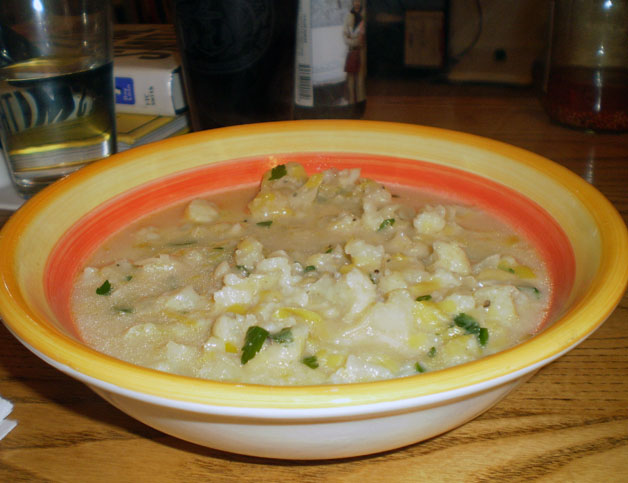 Prep the cauliflower: (1) Remove outer leaves. (2) Cut into large florets. (3) Break apart into small florets with your hands or a knife.

In a soup pot over medium-high heat, melt the butter in the olive oil. When the butter begins to sizzle, add the leeks and a pinch of salt. Sauté the leeks until they begin to wilt, about 5 minutes. Add the cauliflower and another pinch of salt, and cook the cauliflower and leeks until they start to come together, about 3 minutes longer. Add the Gruyère, and give everything a good stir. Add just enough chicken stock to cover the vegetables. Turn the heat down to low, and simmer until the cauliflower is tender, 20 to 30 minutes. At this point, the cheese will have mostly melted. Taste and adjust the seasoning, stir in the parsley, and serve hot.
Posted by Masticating Monkey at 1:57 PM