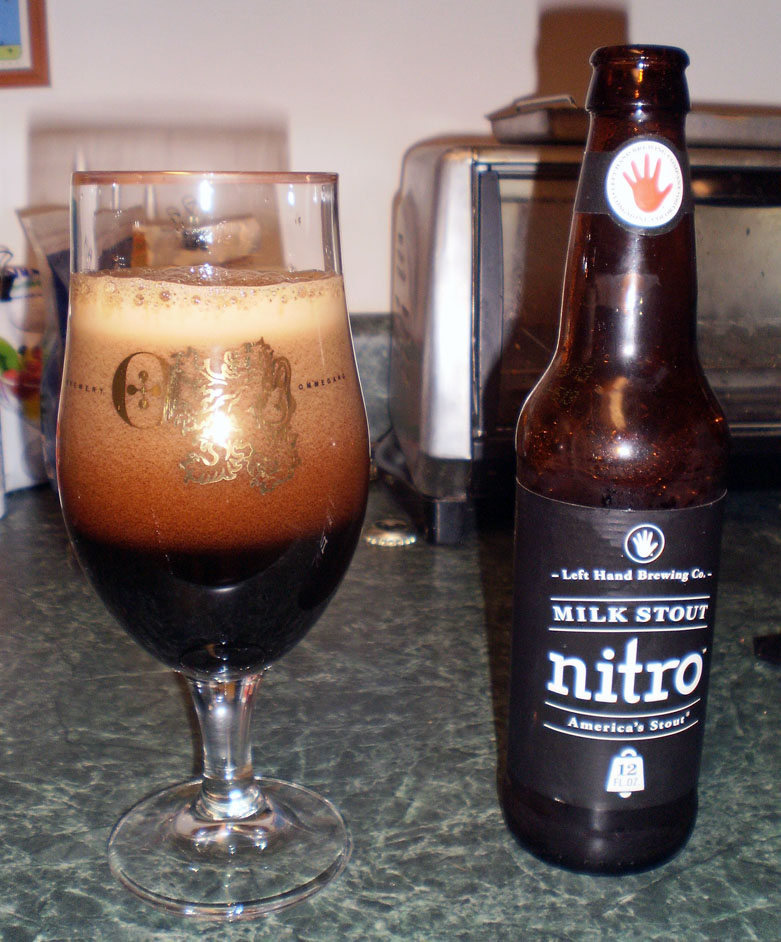 A week after talking about a pair of very good stouts, I'm back with more.  And I'm not talking about these stouts.  Not this time, at least.  They are adorable, though, aren't they?

The stouts I want to talk about this week are a pair I've had before: the Left Hand Milk Stout (though never before in Nitro form) and Brooklyn's Black Chocolate Stout.  It's not like they're unusual or haven't been talked about by a million or so people on the internet before, but I don't care--they're both pretty great, and the Nitro looked so nice when poured that I just had to share some pictures.  Like the one above.

And take one look outside.  It is definitely still stout weather.

Read more »
Posted by Masticating Monkey at 1:09 PM No comments: 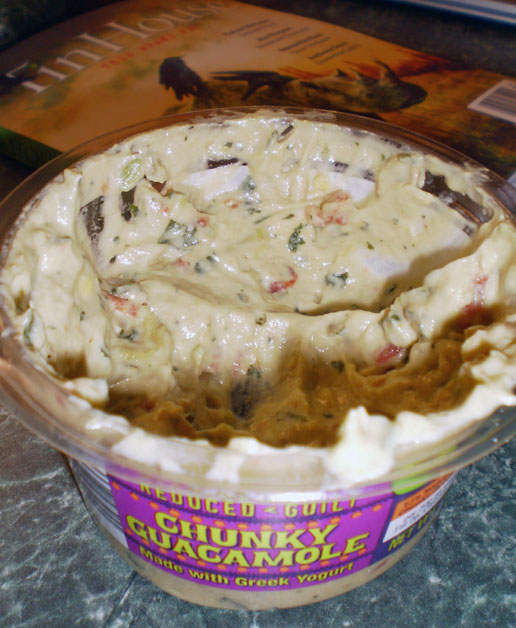 I've been on a big guacamole kick lately.  I'm not about to try to explain it--it's not like it's related to the Super Bowl (didn't have or attend a party, didn't even watch much of the game, yet we still had some guacamole).  I suppose you could say it's somehow a physiological thing--my body craving all that avocado fat here in the cold of my first Albany winter.

Whatever it is, I think we're done with all the guacamole binging for now.  It was a fun little ride, experimenting with levels of lime juice, jalapenos versus cayenne, that sort of thing.  But last week, just after we'd sworn we were done with guacamole for a while, we returned home from a trip to Trader Joe's and I discovered that K had picked up some of their Reduced Guilt Chunky Guacamole, made with Greek yogurt.  Color me intrigued.  (I'm not sure what color "intrigued" actually is--probably somewhere close to fuchsia on the Crayola spectrum.)

Before I get to yet another Trader Joe's product review, indulge me--or don't; scroll right down to the pertinent information--as I pontificate momentarily on guacamole.

Read more »
Posted by Masticating Monkey at 12:39 AM No comments: 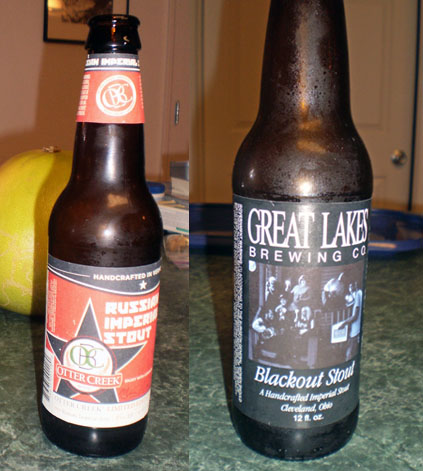 As I write this, the wind chill here in Albany is currently -3 degrees.  In other words, it's still the season for stouts--maybe imperial stouts, to be specific, with their warming, high-ABV booziness.

By this time next month maybe I'll be making my transition toward lighter beers, enjoying a few Irish red ales around St. Paddy's Day before that natural downswing toward IPAs and eventually witbiers and the like.  But I still have a few stouts left to help myself through this long final stretch of winter, and I'd be remiss to not make a couple recommendations from this batch.

When it comes to Russian Imperial Stouts, I use Bell's Expedition Stout as a measuring stick.  I finally had this beer on tap a year ago and was blown away by its complexities.  So, how do Great Lakes' Blackout Stout and Otter Creek's Russian Imperial Stout stand up to the Bell's?  Pretty well, I must say.

Read more »
Posted by Masticating Monkey at 11:29 AM No comments:

What Might Have Been for St. Joseph's and Ravens Head: Remembering Pittsburgh's Church Brew Works

This might initially seem like a negative post, and in a way it is.  But positives first: Ravens Head Brewing, which had a lengthy dalliance with St. Joseph's Church in the Ten Broeck neighborhood of Albany, has settled on what seems like a great space for their brewery and restaurant--the Cohoes Armory.  So anyone looking forward to tasting Ravens Head's beers in a unique location in the Capital Region can rest easy--we might be able to do so before the end of this year.  And that's a great thing for this area.

But in my typical backwards way of doing things, I want to spend a little time thinking of what could have been, not what actually will be.  And I like to think I have some justification for doing so, in that I lived for a few years in Pittsburgh, where Church Brew Works operates a brewery/restaurant out of a gorgeous old church, and I can speak first hand to just how awesome an experience it was to go there for a meal and a beer.

Here's a disclaimer before I get in too deep: I'm new here, I don't know much about all the politics that govern the Albany area, and I can understand the concerns people had about St. Joseph's being turned into a brewery/restaurant considering what seems like a residential location.

That being said, if Ravens Head could have turned St. Joseph's into anything like what Pittsburgh has in Church Brew Works, we've missed out on something incredible here in Albany.

Read more »
Posted by Masticating Monkey at 11:26 AM No comments:

Dinner at Mizu Sushi in Schenectady: Maybe the Best Capital Region Meal We've Had Yet

It was a Saturday evening, maybe 5:30 or 6.  The restaurant itself is rather small--around five or six tables and a sushi bar.  One person came in to pick up a takeout order; another called and placed an order for delivery.  Other than that, we had the restaurant to ourselves.  And that, we realized as our meal progressed, was nothing less than a damn shame.

This was Mizu Sushi on State Street in Schenectady, a place that's easy to miss even if you're like Phil Mickelson in that Enbrel commercial and don't blink.  Let me lay it out for you: Mizu is just east of the Barnes & Noble on Balltown, on the right side of the road if you're headed toward Albany, in the Mohawk Plaza.  Even in that little strip mall, it's tucked all the way in the back.

There; now that I've explained how to get there, you have no excuse not to go.  And go you should, because Mizu serves up easily the best sushi we've tried in the Albany area.  I know--there are a lot of sushi places in this region.  Well, forget them.  (At least for a little while; some are pretty good.)  If you like fresh, expertly-cut, generous portions of sashimi, go to Mizu.  If you like tasty rolls (with a weekend special), go to Mizu.

Convinced yet?  They have a commercial.  Let's watch:

Read more »
Posted by Masticating Monkey at 1:09 PM No comments: