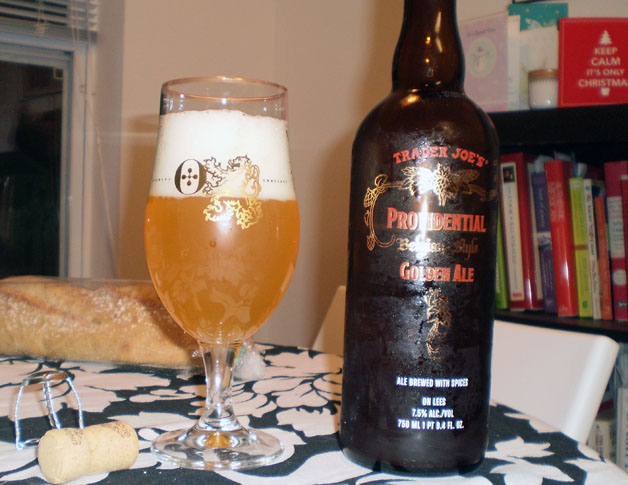 For a few years now, I've eagerly anticipated the annual late fall arrival of the delicious and inexpensive Vintage Ale (brewed by Unibroue) at Trader Joe's.  It's hung around on the shelves a bit longer than usual this winter, with even a handful of bottles there on my last visit to the Albany store a couple weeks ago.  Still--the Vintage Ale is around for two months, if we're lucky.  Then it's always a matter of waiting until November for this great deal on that great beer.

But on that last visit to TJ's, I was in for a very pleasant surprise.  I had to do a double-take--there was a huge display of Vintage Ale in the store once again.  Except it wasn't Vintage Ale.  A closer look revealed a slightly different design on the brown, 750 mL bottle, and a new name: Trader Joe's Providential Belgian-Style Golden Ale.  What a divine little occurrence.

I took home just one bottle, popped the cork on New Year's Eve, and quickly determined I'd need to go back for more.

I should probably make that return visit soon, while there are still some bottles on the shelves, because I'm here to proclaim that once again, Trader Joe's and Unibroue have combined on a beer that's worth your money--and not much money at that, as just like the Vintage Ale it's only $5.99 a bottle. 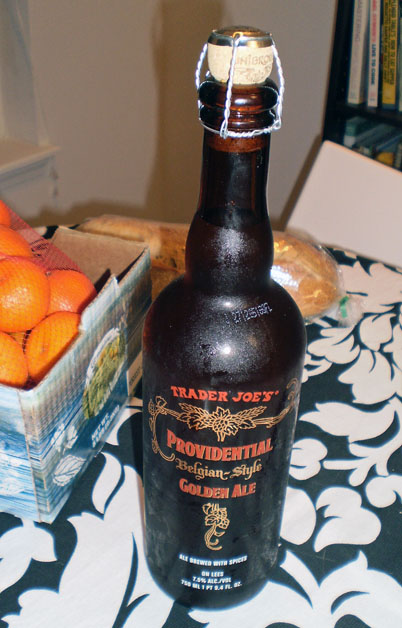 One of the questions that I have about this beer is how it should be classified.  Ultimately, it's not that important a question; if something is good enough, who cares how it's labeled?  But that question does help segue into a description of the beer, so here goes.

The name of the beer gives a somewhat vague idea of how to classify the beer; calling it simply a "golden ale" (Belgian-style) doesn't say much.  Beer Advocate lists it in the Belgian Strong Pale Ale category, alongside beers such as Duvel, Unibroue's own Don de Dieu, and Ommegang's Gnomegang.  Coincidentally, I just had a bottle of Gnomegang for the first time earlier this week (it was excellent), and while I can see some similarities between the Providential Ale and those mentioned above, it doesn't feel like it fits precisely into this category.

For one, it's a little lower in terms of the ABV, at just 7.5%, than these others.  That alcohol is masked really effectively, as 7.5% isn't anything to laugh off, but the Gnomegang, for instance, at two percent higher, does pack a little more punch (and, in terms of the brewing process, is more of a challenge to hide).

And in talking about the taste, I got more of a strong witbier flavor profile from the Providential Ale than anything else.  That shouldn't have been much of a surprise, since the Providential Ale bottle does say, right there in front, "Ale brewed with spices."  Isn't that part of the definition of a witbier?  Some of my favorites, like Allagash White or Great Lakes Holy Moses (why no bottles this year??), are liberally spiced with coriander, orange peel, and chamomile, for instance.

I don't know exactly what goes into the Providential Ale, but I'm guessing many of those usual witbier spice suspects.  It has a really lovely citrusy bite to it (and not from hops; they're not noticeable here), but with the heavier ABV and body than a typical witbier, it really holds up well as it warms, which I think is important with a large bottle, at least when I'm not sharing much of it (I did get my fiancee, not much of a beer-drinker, to indulge more than usual with this one--maybe a relevant point for some readers--as she was quite enamored with the taste and crispness).

So here we are again: another beer from Trader Joe's and Unibroue, another dash of hype from my end.  Yeah, maybe I can sometimes sound like a shill for Trader Joe's with my reviews of their products, but I'm not going to feel bad about encouraging readers to go off and buy bottles of something as good and inexpensive as their Providential Ale.  It's a quality product, almost half the price of most similar beers in this size bottle, but with just as much great flavor.
Posted by Masticating Monkey at 9:36 PM