It's a story reminiscent of the Before Sunrise and Before Sunset films; a tale of brief and fleeting embraces that shake your world.  Boy meets girl, they share a brief but meaningful day together--and then they run into each other again (in the sequel) several years later.

Only in my case, it's boy meets potato chip.  Don't judge.

It's been around five years since our first meeting, in a Giant Eagle supermarket (that's Jynt Iggle if you're in Pittsburgh) somewhere in Ohio--Canton or Wadsworth.  Those aren't the details that matter.  What matters is that I stumbled upon a bag of cheddar and beer flavored Kettle Chips.  It was love at first taste.  My whole perception of what a potato chip could be had been altered.

Soon after, I read that Kettle had retired the Cheddar Beer chips.  Just like that--one meeting, and then they were gone.

A few weeks ago, however, I had my own sequel.  I was wandering the aisles of the Wild Oats Market in Williamstown when I turned and spotted a basket of sale items.  In it were the Kettle Cheddar Beer Chips.  Only now, they were labeled as "limited-batch," part of a line of special 30th birthday releases from Kettle.

I've long been a fan of Kettle Chips in general.  They're made from all natural ingredients and always have great crunch from the kettle-cooking process.  Kettle's standard flavors aren't all that wild (Spicy Thai being the most exciting), but I think their chips pack a lot of real flavor.  Cheesy powder tastes (gasp!) like real cheese, not some chemical substance. 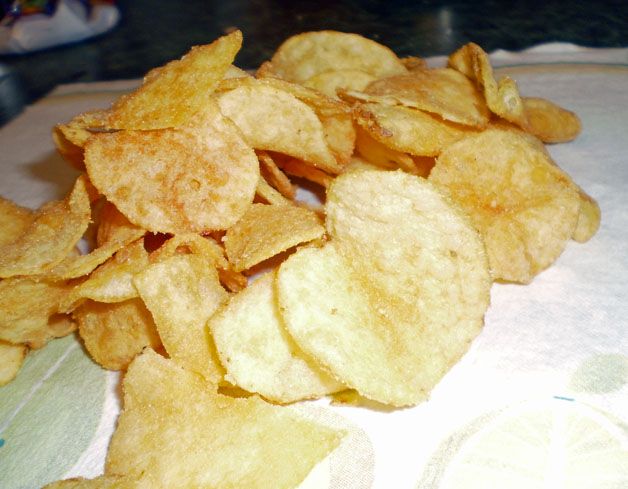 That's definitely the case with the Cheddar Beer chips.  They include both whey and Cheddar cheese in the ingredients, and I definitely get a pretty strong cheese flavor on the chips.  The powder is well-distributed throughout the bag, coating the chips fairly consistently.

The beer flavor in these chips comes out not through the use of actual beer, but yeast extract, like you might get in a good Belgian beer.  They also use torula yeast, a flavoring additive that's apparently reminiscent of MSG.  There are also "natural flavors," which is something I'm often suspicious of.  Rightfully so, I guess.

But here's the rub: I can't care about that in this case.  There's something about the way the flavors all come together in these chips.  The backbone of a strong potato holds everything up, and the cheddar and yeast and other flavors create a rich, succulent flavor.  I get some maltiness in there, too, to add to the beery essence, and they're not greasy--not a hint of oil was left on the paper towel they were placed on.

So, there you have it.  These chips are awesome.  Plus, Kettle and I have the same great taste in baseball teams (warning: turn your sound down before you hit play):

Major bonus points there.  But no matter--if you see these chips and think a combination of beer and cheddar flavors might be up your alley, get them while you can.  It may be too late, though; I saw some of the other limited batch flavors on sale at Fresh Market, but no Cheddar Beer.

Well, if you're really convinced, you can get a crate of them straight from Kettle.  I don't even know if I'll go that far to get more--I kind of want it to just happen again as a surprise, strangers passing in the night.
Posted by Masticating Monkey at 10:35 AM