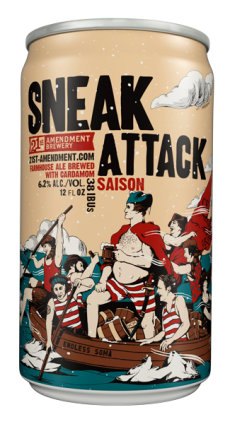 I had a little discussion about Dogfish Head recently with the fuj in the comments section of FUSSYlittleBLOG.  I defended the brewery for some of their missteps with their more adventurous offerings because I think Dogfish Head has demonstrated their ability to do a really solid job with their standards: the 60/90/120 Minute IPAs, the Indian Brown Ale (one of my favorite brown ales), and their Punkin Ale (love it), to name just a few examples.

So, go crazy, I say.  I love a little adventurousness from breweries or restaurants.  Is it always going to hit the mark?  Nah--and, to be honest, with some of the high prices of the beers Dogfish Head puts out, I'll pick up the bottle, read the description, and put it back without buying it (and then try to remember to read reviews once I get home).  Sometimes you'll get a beer like the Pearl Jam-tribute Faithfull Ale that just doesn't all come together; other times you'll get the Red & White, a strong witbier fermented with pinot noir juice that, at least the one time I had it on tap, blew me away with its complex layers of flavor.

With that in mind, I was drawn straight to 21st Amendment's Sneak Attack Saison when I saw it on tap at PUBLIC eat+drink in North Adams.  It may have been cold outside just after the new year in Western Massachusetts, not exactly saison weather, but A) I'm pretty much always up for a saison, and B) the description of the beer had me raising an eyebrow (in a good way).

I can't recall the exact description on the drink menu at Public, but there was something about how Sneak Attack is dry-hopped with whole organic cardamom pods and features hints of lavender.  Yeah, that's interesting.

I mentioned Dogfish Head earlier because I think 21st Amendment, a relatively-young brewery based in San Francisco (just two blocks from the best ballpark in the country) has shown a similarly adventurous spirit.  I don't know that they've hit on the basics all that consistently well, but I like their winter warmer more than most and think their Monk's Blood is pretty solid.  And while I may not want a watermelon wheat beer, you have to give them credit for going out on a limb and making that one of their regular offerings.

And I know this isn't good for my street cred, but 21st Amendment's can/box artwork is so incredibly awesome that yeah, it has sucked me in before.  I mean, come on--it's FDR having a Christmas fireside chat with an elf.  And now, even though I didn't know it when I ordered the beer, you've got George Washington--wearing only a cape and striped shorts--crossing the Delaware in winter for a "Sneak Attack."

Okay, so that's all well and good, but the beer itself?  I like what 21st Amendment brewer Shaun O' Sullivan had to say about releasing the Sneak Attack Saison in the middle of winter: "This is normally the time of year when brewers are introducing strong, heavy beers, the 'winter warmers.' And we drink a lot of those beers and they are amazing. But your palate gets fatigued and you really need to have an option to just break it up. So we thought this would be the perfect 'antidote' beer."

I think there's something to that; I'd been drinking mostly winter seasonal beers and stouts in the weeks leading up to our visit to Public, and a farmhouse saison, with those typical grassy, fruity flavors, seemed like a perfect change of pace.

The Sneak Attack struck me as a little thin, even for the style, but the flavor was intriguing and ultimately quite pleasing.  I don't know if I got any of the lavender that was mentioned in the description at Public, but there was a touch of grassy bitterness up front that graduated to some citrusy spice notes and the peppery bite of that cardamom.  It's a dry beer that paired especially well with the red onion rings and fish tacos I had for dinner.

Is this the best saison I've had?  No, certainly not.  But it's good and a very unique take on the style--definitely worth trying if found on the shelves this winter (I haven't noticed it yet, but know 21st Amendment is sold at some of the finer beer sellers in the Capital Region), even if just as a single to see if it hits the spot.
Posted by Masticating Monkey at 1:20 PM