Mission Chinese Food: So Hot (In More Ways Than One)

You know what I haven't done much of over the years?  Eaten out at hot, new, trendy restaurants.  I'm not talking about some falafel joint in Pittsburgh that all the cool kids would flock to.  I mean the kind of restaurant that's getting written about in magazines, reviewed by the Times.

Part of that is simply lack of opportunity--not enough time spent in the kinds of cities where hype machines rage endlessly.  But there are other explanations that offer a slightly deeper glimpse into what kind of person I really am:

1) I do not handle crowds or long lines particularly well.  These often must be negotiated if you want to get seated at some hot new spot.

2) It is hard to find a hotly-discussed new restaurant that is not fairly expensive; this would require spending large sums of money on a meal, which is something I generally avoid doing.

But in the weeks before K and I made a holiday trip to New York City, I don't know how many magazine articles or internet posts I read about Mission Chinese Food, the sort of fusion Chinese restaurant in the Lower East Side that opened up in May 2012.  Mission Chinese was started first in San Francisco by Oklahoma native Danny Bowien, and what struck me in all I read about the restaurant was the way Bowien takes many of the Chinese flavors and cooking traditions I know and love and puts a decidedly 21st century American-kid spin on them.

Kung Pao Pastrami?  Chongqing Chicken Wings?  Tingly Tea-Smoked Chicken?  I could go on and on--almost everything on the menu grabs you by the wrist in a devilish way, begging you to come closer.  Close enough to touch, close enough to smell all that chili oil and Szechuan pepper.

The other thing that's noticeable on that menu?  The prices.  Almost every entree falls under $13. 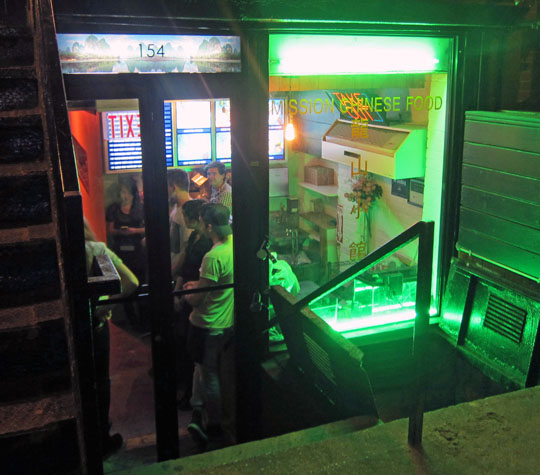 My interest was becoming more and more piqued.  But there was also the problem of the huge crowds that started gathering on opening night and never, according to Yelpers, seemed to abate much.  Oh yes, it was so adorably hipster of Mission Chinese to sometimes put a keg of cheap beer just outside the door of the restaurant for diners waiting hours to claim a table (a couple of good beers, including one from Sixpoint Brewery, were on tap at the bar), but K and I were in the city just for the day.  We took an early-morning train down, had a late-night train back up.  Spending hours in line isn't an efficient way to spend a rare trip to New York.

I know a lot of people love to trash Yelp for the insufferable nature of many of its reviewers, but especially in cases where there are a lot of reviews about a place--like Mission Chinese--you can crowdsource pretty effectively for information if you're a thoughtful, critical reader of Yelp.  And after staring at enough reviews, I came to the conclusion that it might, in fact, be possible to get seated quickly at Mission Chinese--so long as you visited for lunch, late enough that some of the noontime crowds had cleared.

I convinced K to take a chance on it; after arriving in Penn Station we fortified ourselves for a little shopping on Broadway with bagels and then made a fifteen-minute walk to the Lower East Side.  Even with the address of Mission Chinese written down, we almost walked right past it.  I'd seen some pictures online, but in person it was even more of a hole in the wall than we expected.  There was practically no signage, and the entrance was down a dozen or so steps from street level.  No matter: it was a beautiful sight because, at 2 p.m. on a Thursday, there wasn't a single person waiting to be seated ahead of us. 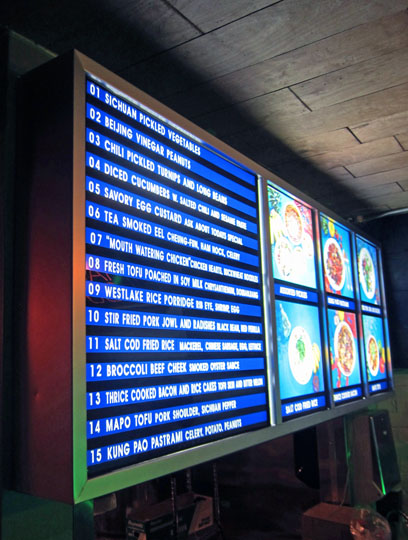 The waiting area at the front of Mission Chinese paid homage to take-out Chinese joints with their own backlit menu board; to get to the dining room, we were led past an open kitchen where flames leaped frequently from woks.  The dining room itself is small; tables are pressed close together--which makes for entertaining eavesdropping opportunities--and some old-school rap blasted distractingly from the speakers overhead.  This was just the beginning of the sensory overload served up at Mission Chinese.

While the dishes mentioned above were tempting, we wanted to try to mix things up a little (and not eat too heavy, with several more hours of traipsing around the city on our docket).  We ordered the Beer-Brined Sichuan Pickles ($4) as our appetizer, reminded of Brooklyn Brine's wondrous Hop-Pickle, lured by the combination of beer, vinegar, pepper, and pickles.  While the dish was interesting conceptually, the sourness and beer flavor were almost entirely masked by the amount of chili oil in the bowl.  A little better balance here, and we'd have a less oily, more complex snack.

Our first entree, the Taiwanese Clams ($12), came out next.  The simplicity of the name belies the complexity and inventiveness of the dish.  One of the few items on the menu that doesn't rely on chili oil, these clams were served in a rich, brown broth of soy caramel, fried garlic, and basil.  A reasonable serving, the clams were cooked just right and functioned as a perfect complement (and spoon) for the broth.  Along with the richness, the broth was sweet--hence the caramel--but just enough to add to the dish, not overwhelm it.

The only issue we had with the Taiwanese Clams was that, after we finished the clams and the chunks of potato served with them, there was a small pool of broth remaining in the bowl.  At no point were we offered rice, and only now, looking at the online menu, do I see that barley rice is available as a side dish for $1.50.  You can't complain about the prices at Mission Chinese (they're the same for lunch and dinner), but I'm pretty sure it's fairly uncouth to charge for rice at a Chinese restaurant.

Our second entree was the seductively-named Thrice-Cooked Bacon ($12), a dish featuring pork belly served over Korean rice cakes.  But what's up with the "thrice-cooked" part?  Ah, I love you, internet: here's the recipe, in comic form, from Allen Yuen, general manager at Mission Chinese.  I like the flames shooting from the wok; maybe that's what I saw cooking while we walked past the kitchen.

You can see the recipe for yourself, but let me tell you about this dish.  If it weren't for the tongue-numbing heat from the Szechuan pepper and chili oil, it would have been flawless.  Even so: the pork belly, served in about quarter-inch thick pieces, was cooked to perfection and was remarkably smoky, while the bits of bitter melon provided a small but effective contrast in both flavor and texture.  Combine that with the chili oil, Szechuan pepper, and scallions and you have a vibrant sauce to coat the dense and deliciously chewy rice cakes.  The tofu skin was an appealing addition, but the flavor was somewhat lost with all the heat.  Again, if the heat were turned down on this dish, if it were just a little less oily, all the other flavors would have shined a bit more brightly.

Did Mission Chinese live up to the hype?  Sort of.  I mean, we had two entrees and an appetizer for less than what we might have spent on a meal at a diner in Albany.  And the level of inventiveness with these dishes at Mission Chinese, the compelling array of flavor combinations, were unlike anything I can remember.

That's not to say the meal was perfect, as I mentioned above with the overwhelming levels of heat in two of our three dishes.  But we left satisfied, a little thirsty from the saltiness of the meal, ready to roam the streets of Manhattan with all that Christmas feeling in the air.  I paid my first visit to the holiday windows at Macy's and Lord & Taylor, saw the tree at Rockefeller Center, yet it's the meal at Mission Chinese that might hold up as the most memorable part of our day.

Email ThisBlogThis!Share to TwitterShare to FacebookShare to Pinterest
Labels: Eating out, NYC, Travel