The Hop-Pickle: A Delicious Collaboration Between Brooklyn Brine and Dogfish Head 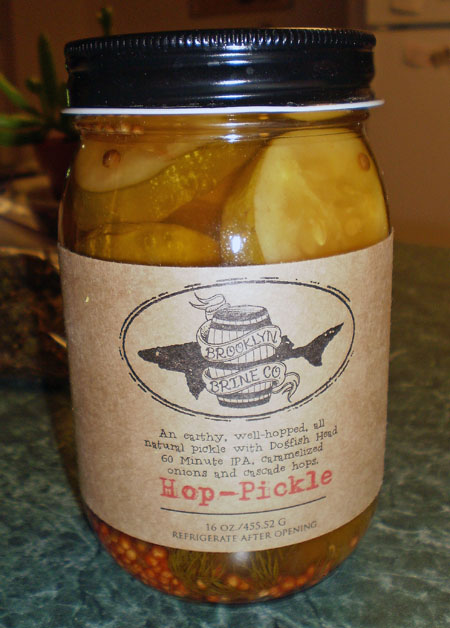 If I'm not mistaken, federal law requires that every article about a successful collaboration must begin with a list of legendary duets/duos from music or sports.  You know: Sonny and Cher, Simon and Garfunkel, Stockton and Malone, Gretzky and Kurri.  You get the idea.

In that vein, when I think of the great Hop-Pickle collaboration between the Brooklyn Brine Co. and Dogfish Head Brewery, I think of some of the great side projects from already-established musicians.  Temple of the Dog automatically comes to mind, though Pearl Jam hadn't even released their first record before that collaboration with the guys from Soundgarden.  There are also several comparable examples from fairly recent vintage.

The Hop-Pickle collaboration reminds me most of successful teamings of some unique musicians, like David Bowie joining Queen for "Under Pressure" or (on a lesser scale, of course) M. Ward and Zooey Deschanel combining for their She & Him albums.  Each had blazed a distinct trail on their own before these collaborations, yet after hearing the results of such teamwork you'd have thought they were born to play together--a phrase you could easily apply to Brooklyn Brine and Dogfish Head.

Enough music for now.  We need to talk pickles.

I love good beer; that's certainly not a secret if you've even glanced around this blog.  And I also love a good pickle--I was happy to find those half sours at Nosh upon moving here a few months back, for instance.  So a combination of the two?  Yes, please. 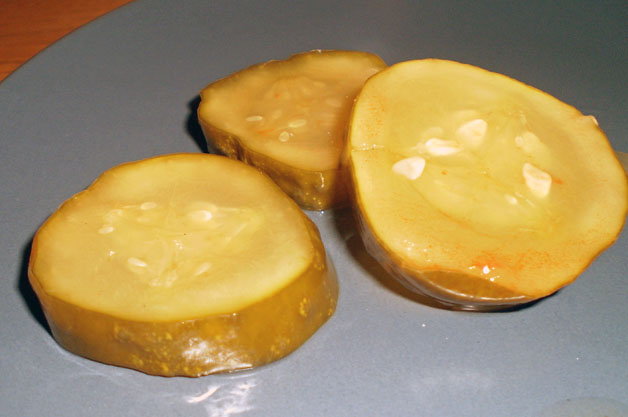 Thankfully, I have a fiancee who knows me well enough to know that a jar of Hop-Pickles is something I'd be thrilled to receive.  She got the jar back in October when visiting Eataly in New York City, the Italian food market/restaurant mall spearheaded by Mario Batali and Joe and Lidia Bastianich (which attracts some relatively-famous clientele, as noted by K's spotting of Elizabeth Falkner, potential Iron Chef, shopping in Eataly).

K was there with her brother, after picking him up on a visit from California, while I stayed home.  I love visiting the city, of course, and am eager to check out Eataly (though it does sound kind of overwhelming), but ultimately was happy to sit home and watch this beautiful, heroic event.  And to then be presented with the jar of Hop-Pickles upon their return?  Even better.

The Hop-Pickle is so good because of the quality of its ingredients.  The beer is not just any beer, but Dogfish Head's celebrated and wonderfully-hoppy 60 Minute IPA.  People always say that you shouldn't cook with a beer (or wine) that you wouldn't also want to drink, but you especially don't want to eat a pickle that's been brined in lousy beer.

That's because in the brining process, these pickles are seriously infused with the flavor of the 60 Minute IPA and its citrusy hoppiness.  But the Hop-Pickle isn't just about the beer; Brooklyn Brine Co. put together a group of ingredients for this brine that magically come together.  I'll admit it: we looked at these pickles and first thought they looked a lot like bread and butter pickles, the way they're sliced in rounds.  And we aren't fans of bread and butter pickles.  But that was just an optical illusion; the ingredient list tells you why: 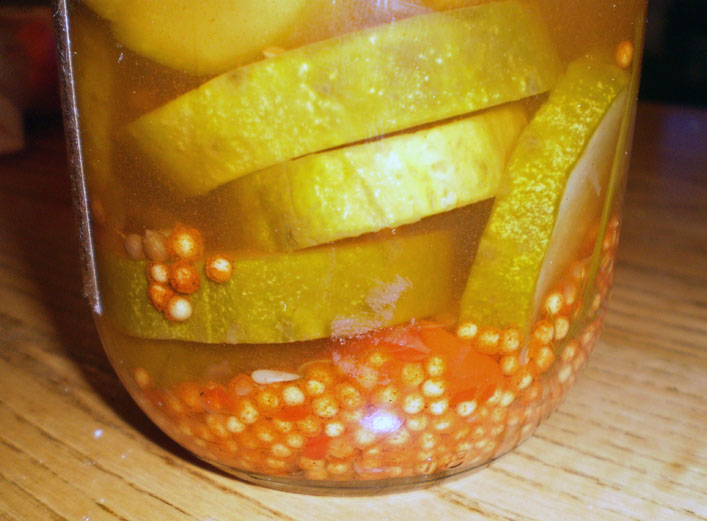 The Hop-Pickles take on so many of those flavors--you want to take small bites of these pickle slices (which have nice texture--a decent crunch on the outside, a gentler interior) because you never know what you're going to taste from one bite to the next.  The hoppy flavor of the beer is most discernible, but you also sometimes taste the booziness of the bourbon.  And with habanero featured so prominently, you also get a little bit of heat.  There is a hint of sweetness from the sugar and maple syrup--and oh, on top of that the pickling spice mixture, plus smoked paprika.  The flavors come at you from so many different angles.

We were pretty sad once we'd finished the last pickle (I think K thought there was one left after I ate the final one).  We stared forlornly at the jar--we could still smell all the components of the brine, could see the dill and all those spices floating around inside, marooned with no cucumbers left to pickle.

But even with all the pickles eaten, it's easy to celebrate the collaboration between Dogfish Head and Brooklyn Brine.  As Sam Calagione, founder of Dogfish Head, put it (and check out the series of great photos from this article), "Good karma comes from collaboration with small companies, especially those in industries dominated by giants."

Not just good karma--really good products.  And with the way both Dogfish Head and Brooklyn Brine both love to think outside the box and put forth consistently excellent products (I can speak more to Dogfish Head's beers on this, though I'm confident I'd be a fan of many of Brooklyn Brine's other pickles), I can only hope there are more interesting side projects forthcoming from the pair.

Go buy some good pickles--here's a list of where to find them: http://brooklynbrine.blogspot.com/p/brinery-store.html or get them online.  Talk about a stocking stuffer.
Posted by Masticating Monkey at 11:24 AM