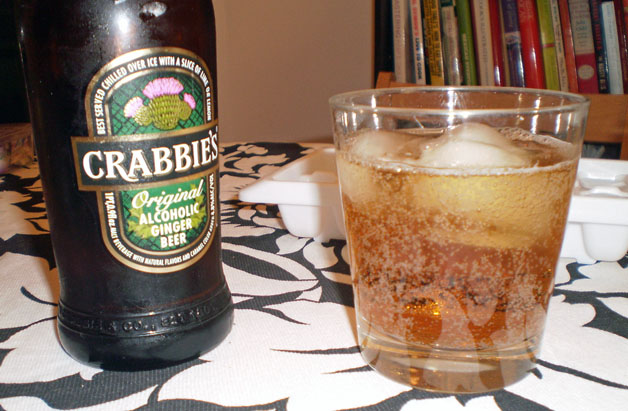 I can safely say that none of my favorite beers have television commercials.  I don't recall seeing any, at least.  And in terms of other forms of advertisements, they're generally quite low-key (and don't make it beyond the doors of a beer store).

So it's kind of fun to promote a "beer" (more on the quotation marks later) that airs commercials like this:


And has its own double-decker tour bus: 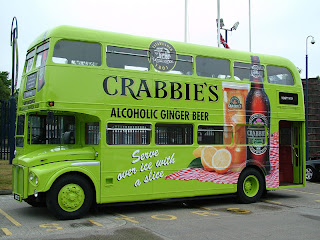 Crabbie's Ginger Beer is Scottish and more than two hundred years old, so even though I'm often turned off by advertising, they get a free pass (plus the commercial is pretty good and don't even try to tell me you wouldn't love to get on that bus).  Though it's obviously big in the UK, Crabbie's is something of a novelty drink here in the States--a pretty good and interesting one, at that.

I like ginger, and have enjoyed some non-alcoholic ginger brews over the years.  There are the well-known and tasty ones from Reed's, and last year I really got into Blenheim's Ginger Ale (especially the Old #3 Hot - Red Cap version), which is mostly a Southern thing but can apparently be found in Chatham, NY, at the Peint o Gwrw Tafarn (which I really have to check out one day because it sounds amazing).  Speaking of alcoholic ginger beers, I've wanted to try Left Hand's Good Juju for the past couple years, but never got my hands on a single, and I'm wary to bother with a whole six pack because I have my doubts about just how much ginger will actually be present in such a beer.  I don't want ginger on the level of Canada Dry. 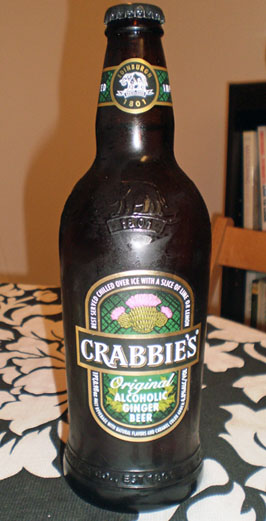 So when I found a single 500 mL bottle of Crabbie's Ginger Beer on the shelves at the Latham Beverage Center for $3.99, I decided to give it a shot--despite an attachment at the top of the bottle encouraging the ginger beer to be enjoyed with a slice of lime or lemon.

This past Sunday I finally tried out the Crabbie's, figuring it might go well with the butternut squash soup I'd made for dinner.  I didn't use any slices (which might be used to diminish the bite of ginger), but did follow the directions and pour it over a few cubes of ice.  I'd feel much worse doing this if Crabbie's were a real beer, but it's technically a flavored alcoholic beverage.  So, over ice it went!

Crabbie's is highly-carbonated, very fizzy, with a brief head reminiscent of 7-Up or Sprite.  The coloring was light caramel, not unlike that classic shade of late-'70s/early-'80s Camaro, which I will admit my mother drove for a time when I was just a young thing.  It was California, the '80s; what do you want me to say?? 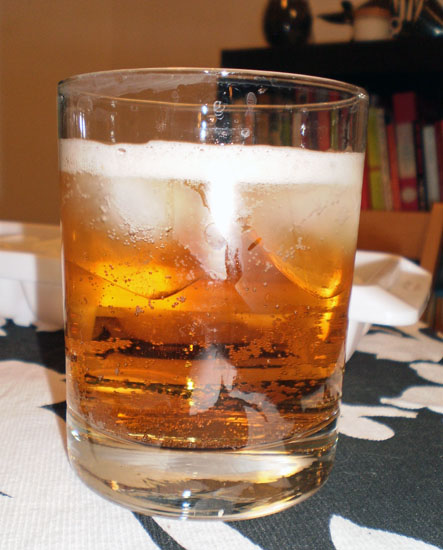 I can't recall much of a scent from the Crabbie's; maybe the carbonation got in the way.  But the drink certainly wasn't lacking for taste.  While the ginger flavor isn't nearly as strong as the brilliant Blenheim Old #3, it is fairly prevalent.  This was not a let-down in terms of the ginger flavor, which is what I was conditioned to expect.

Maybe it was just a mental thing, what with the drink poured over ice, but K and I were both reminded of mixed drinks with the Crabbie's; it wasn't hard to imagine we were drinking a rum-and-ginger ale mix (though the alcohol in the Crabbie's wasn't that strong--just 4.8% but still noticeable here).  She thought the ultimate taste kind of strange, so I finished her drink for her and found the taste grew on me.  I liked the ginger aspect, and it definitely was refreshing.

I don't know that I'll be going back for another Crabbie's anytime soon (I'd say it's best enjoyed every once in a while), but especially if you're a fan of ginger, I'd recommend it as a unique drink that has some novelty appeal and might just hit the spot on your palate.
Posted by Masticating Monkey at 1:01 PM