Home and Away: Beef Rendang at Flavors of Malaysia in Pittsfield and from a Prima Taste Box 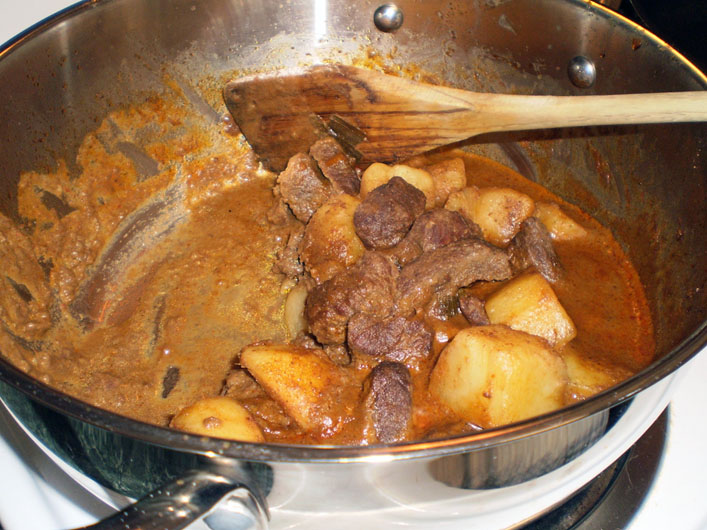 Last week in my "white whales" post, I mentioned my love of Malaysian food and beef rendang, specifically.  As I said then, Malaysian cuisine is a brilliant fusion of native Malay, Indian, Chinese, and Thai culinary inspirations (among others!).  If you know the dishes of those countries, then you can only imagine how strong the flavors are when merged in one cuisine.  No, this is not food for the meek, for those who don't want things vibrantly spiced up.

It is the location of Malaysia--its proximity to those countries listed above and its usefulness as a trading hub--that enabled the spices and culinary influences of so many places to end up concentrated in this one location.  Just watch the Singapore episode of No Reservations and tell me there's any other place on earth that could compete as a culinary destination.

I haven't had the fortune of visiting Singapore or anywhere else in Malaysia to indulge until my belly burst, but I've been lucky enough over the past decade to try out Malaysian food at restaurants in a handful of cities, starting with The Spice Island Tea House in Pittsburgh.  Eating at this restaurant is one of my fondest memories from three years of grad school, and I don't care if some dishes there fell a little on the oily side or it felt a little too tropical in the summer with the front door open and no air conditioning--if you happen to be visiting the city, especially near the Pitt campus, go eat at Spice Island.

More recently, I've loved being introduced to the Penang Restaurant in East Hanover, NJ, by K, who knew the restaurant from her days growing up in the area.  We stopped in over the summer, our second trip there together, and were especially taken by the roti canai and the beef rendang.  Roti canai is for another post, and not a "home and away" one, because there will be no recreating that bread at home.  We loved both of these dishes at Penang, and figured we'd have to wait for another trip to New Jersey, or maybe one to New York or Boston, before having either again.

Thus it came as a huge and pleasant surprise to discover, on our first trip to the Berkshires as Capital Region residents near the end of September, that there is an honest-to-goodness authentic Malaysian restaurant in Pittsfield, MA: Flavours of Malaysia.

I didn't believe it at first.  I mean, I looked at the menu...seemed right.  I read the reviews...sounded good.  But...Pittsfield? 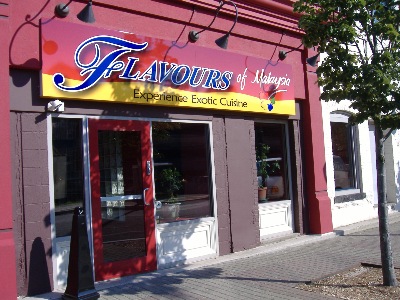 After a long, fun day of thrift store hopping, art gallery strolling, and Williams College admiring, K and I stopped at Flavours for dinner.  From the outside, it looks ordinary, like so many simple, hole-in-the-wall restaurants.  But inside, this place is different.  First, of course, are the smells: utterly familiar (curry powder, then lemongrass, then Chinese five spice) but strange when taken all at once.  And the restaurant itself surprised us; recessed down a handful of stairs, the dining area is large and open.  Near the front window is a stage for bands to perform on, and in one corner of the dining room is a fully-stocked bar (featuring Berkshire Brewing Co. beers, I might add).  This is not the generally conservative, low-key atmosphere of most Asian restaurants.

That doesn't mean the food takes a backseat.  According to the Flavours website, Sabrina Tan "is the only food preparer in this establishment."  Seriously, I do not know how she manages this, particularly on a Saturday night like the one on which we visited.  It was busy, and while the food was not exactly served quickly, the wait was in no way problematic.  Servers were attentive and the roti canai appetizer was delivered shortly after we ordered.  We also saw Ms. Tan on the floor on a couple of occasions, greeted by frequent guests she's clearly come to know over time.

While the roti canai could have been drained a little better and the beef rendang was, dare I say it, a bit too oily, the flavors were all bold and spot-on.  The roti canai was appropriately spongy, though, and the bowl of chicken curry for dipping was strongly flavored, a perfect complement. 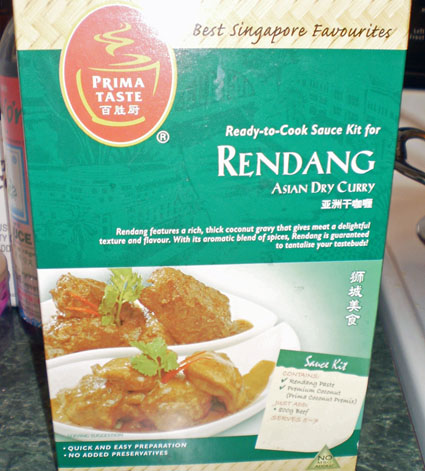 Rendang is traditionally made with lemongrass, galangal, chilies, and coconut milk (for starters), and these elements were all noticeably present in Flavours's version.  The heat of the chilies and galangal was evident, and Ms. Tan was generous in her use of lemongrass.  It was maybe a bit overly-salty, but when served over rice that problem is somewhat tempered.  What we were surprised by was the beef itself; in the past we'd always had cubes of beef, basically stew meat, when ordering rendang, but at Flavours the beef was thinly sliced and thus very tender.  Also, the dish was served on a plate, with a side of rice, and the offerings were relatively modest.  In the past we've been served rendang in a bowl, in somewhat larger portions.  It's hard to complain much when the food is as good as it was at Flavours, but of course we wanted more of it.

K and I were well satisfied following that meal, excited to know that there is an option for Malaysian food within an hour's drive.  Thinking about recreating the dish at home, however, we found the task daunting: rendang is one of those meals best prepared for you, by a chef creating a spice paste that can be used for many diners in one evening.  Otherwise, just making up that spice mix can be tedious, requiring the acquisition of many ingredients (many of which are hard to find or won't be used in full in the recipe) and much effort.

And so, while not as surprised as we were to discover Flavours Restaurant, K and I were very much intrigued when we spotted a boxed "ready-to-cook sauce kit" for rendang from Prima Taste at the Asian Supermarket in Albany.  Is it a bit of a cop-out to use a pre-made mix from one of those silver, astronaut food-looking packages?  Sure.  But we wouldn't have bothered trying it if the ingredients weren't so impressive and real, including: chili, galangal, onion, shallot, pandan leaf, garlic, candlenut, ginger, lemongrass, soy sauce, fennel, coriander, cumin, kaffir lime leaf, cloves, turmeric, white pepper, and cinnamon.  Phew.  So many--a good reminder of why it's not necessarily worth making this meal in any home kitchen without a little starter kit. 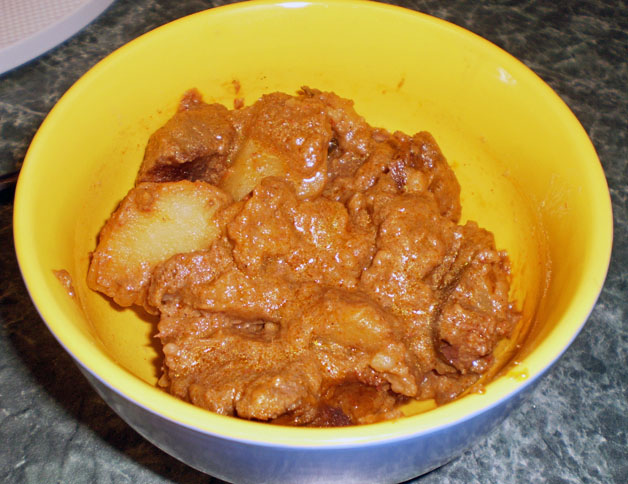 We went ahead and picked up some lean stewing beef from Trader Joe's, and after that the process of cooking beef rendang using the Prima Taste packet was relatively simple, with the directions shown on the back of the box.  K used only about half the packet of coconut powder (presumably a useful replacement for coconut milk) provided in the box, though maybe using the full packet would have created more sauce, and maybe creamier at that. She also added some potatoes to the mix, which lent some stewy bulk to the dish, another nice way to taste the rendang sauce.  The result after slowly cooking the beef was a very tasty meal, the sauce authentic in its flavoring, rich and satisfying.

While this method wasn't ideal or cheap (not after the relatively high cost of the Prima Taste packet, over $6--though admittedly, cheaper than buying all the ingredients individually--and the subsequent beef purchase), it did hit the spot and satiate our desire for rendang.

I'd highly recommend Flavours of Malaysia to anyone heading out to that part of the Berkshires.  Compared to some other restaurants we tried, Flavours really stood out; it's worth the drive if you're down in the Lee area or up around Williamstown.

But when you're not there?  The hearty richness provided by the spice pack from Prima Taste left me satisfied that there's an easy way to make rendang at home.  A little authenticity from a silver pack?  Sometimes you have to open your mind when you're on the hunt for your own white whale.

Doesn't mean I'm going to stop hoping for a Malaysian restaurant to open up in the area, though.

Flavours of Malaysia Restaurant is located at 75 North Street in Pittsfield, MA
Posted by Masticating Monkey at 2:29 PM

Email ThisBlogThis!Share to TwitterShare to FacebookShare to Pinterest
Labels: Eating in, Eating out