I'm Calling It "The Jimmer Lee" 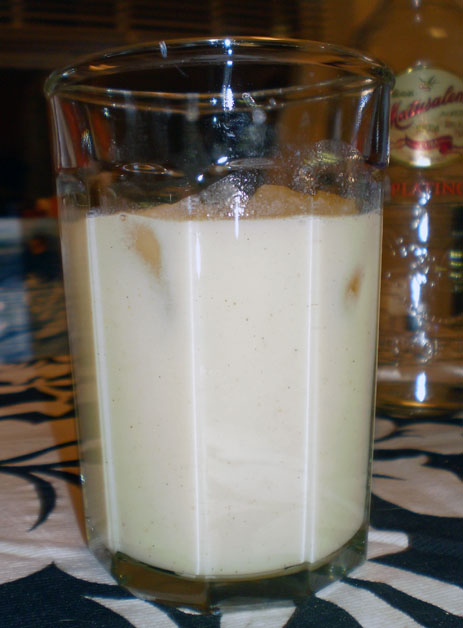 To commemorate my first winter in the Capital Region, I wanted to honor a couple of local luminaries (and use up some leftover eggnog) in creating a splendid seasonal alcoholic drink, which I've christened "The Jimmer Lee."

The drink is named after A) Jimmer Fredette, the Glens Falls native who blew the minds of BYU basketball fans and is now riding the pine for my Sacramento Kings in the NBA, and B) Sandra Lee, fabulous Food Network host and girlfriend of New York Governor Andrew Cuomo.  (And no, this post is not mean-spirited because I know that Sandy does have feelings.)

Let me get a few clarifications out of the way before we start mixing this drink:

1) I am aware that Jimmer is a Mormon and therefore creating a drink in his honor is somewhat sacrilege, and

2) My tablescape, as seen above, is woefully lacking and in no way honoring Ms. Lee's work (a crate of clementines is no centerpiece).

I have to face facts here: the Albany area is not exactly teeming with celebrities.  And I have been a long-time devotee of the Kings, growing up in the Sacramento area, rooting them on from their short-short days to when they should have knocked off the Lakers and won it all.  Now it's a miserable, nearly hopeless situation for the club, and that's what Jimmer was drafted into more than a year ago, expectations hovering somewhere between savior and messiah levels.

Not surprisingly, Jimmer didn't fare too well in his rookie year.  But I've watched some Kings games this winter and, although Jimmer has played fewer minutes as part of some wonky rotation strategies, he's been a much more efficient and effective player in his sophomore campaign.  No, he may never be more than a sparkplug energy guy off the bench, but at least--unlike last year--he's shown he deserves to play in the NBA. 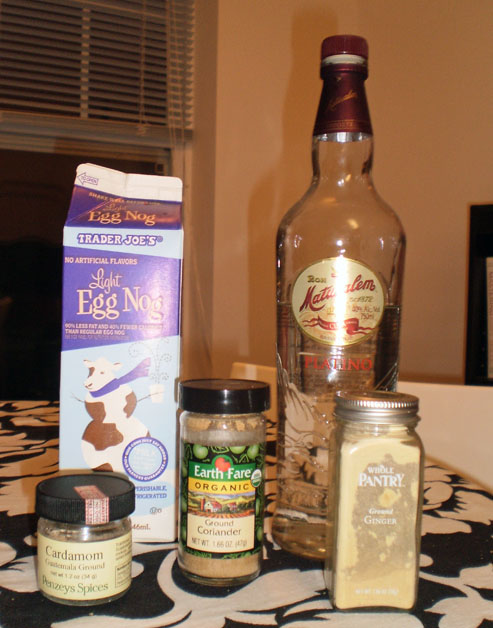 So yes, I thought, let's make a drink in honor of Jimmer!  Considering I had some leftover eggnog in the refrigerator, and eggnog and Jimmer sort of resemble each other for their pasty-golden hues (eggnog for literally looking a bit golden, Jimmer for simply retaining some of that golden-boy sheen), I figured I had a perfect base.

Shamefully, other than as part of some seasonal McDonald's milkshake I drank in the '90s, I must admit that this was my first time ever trying eggnog.  And I know I may lose considerable readership by admitting this, but eggnog isn't something I like all that much.

(It could be worse: K refers to eggnog as "A cool, tall glass of phlegm," while Mr. P, when given a sniff of the stuff, sprinted out of the room with his tail puffed up, greatly threatened by the drink.)

We needed to doctor this stuff up.  Thus, with Sandra Lee inspiring me to make this a boozy eggnog (question: does anyone actually ever drink it without the alcohol?), here's the concoction I put together:

Shake it up and serve over a few cubes of ice.

Jimmer and Sandy both bring a little spice to our lives, Jimmer with his hot shooting, Sandra with her, well, hot everything.  That's where the ginger, coriander, and cardamom come in.  A touch of earthiness and a bit of sass--a fine combination for the cold winter here in Albany.

All that said, please do not make this drink.  You can dress up eggnog a million different ways, but in the end, it's still eggnog.
Posted by Masticating Monkey at 2:06 PM