Get This While You Can: Trader Joe's 2012 Vintage Ale (by Unibroue) 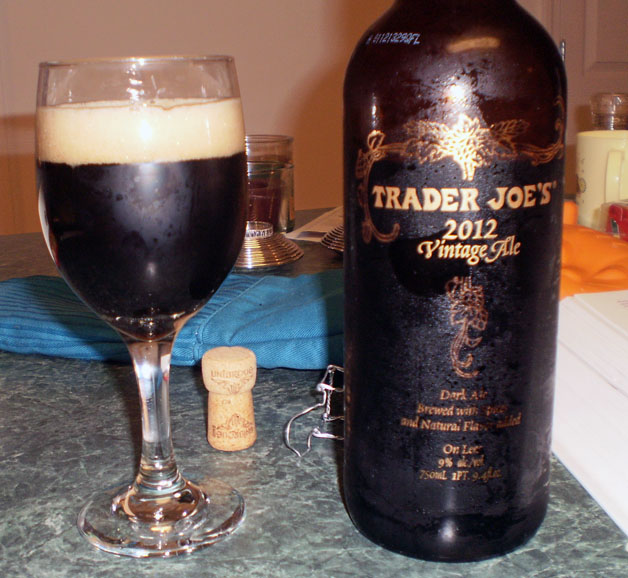 When you think about Gateway Beers--those that help kickstart a person's transition into the craft beer world--you're not likely to include Belgian strong dark ales anywhere near the top of the list.  I'm not exactly sure what my Gateway Beer was.  Maybe Newcastle Brown or Bass?  Obviously not craft beers themselves, but better than the mainstream American dreck that never held any appeal for me.

Others might give answers like Blue Moon, or Sierra Nevada Pale Ale.  Maybe one of the big releases from Sam Adams.  Hoegaarden, anyone?  That, just like Blue Moon, is a Belgian style--a witbier.  A witbier is usually light and crisp and not too strong in its spicing, which is often highlighted by the taste of banana or orange, or spices like coriander.  For anyone who doesn't think they like beer, ones like these can certainly start to affect some change to that mindset.

But back to the possibly ridiculous idea of a Belgian strong dark ale, like the 2012 Vintage Ale from Trader Joe's, as a Gateway Beer.  This is a strong beer in the sense that it's got a pretty high ABV--9%.  But what's that to a wine drinker?  If you're not looking to down the whole bottle (750 mL for the ridiculously good price of $4.99), but just drink a glass or two and share with someone else--as you might with a bottle of wine--it's not going to leave you passed out on a floor (unless that's your preferred destination for sleep).  And maybe most importantly, it's a very masked 9%, nice and warming but without any cloying booziness.

Also: the bottle might be attractive to a wine drinker.  Classy and simple.  So there's that.  And it's awfully lovely to look at after it's poured: that big, off-white head, under which the beer--a rich brown, reminiscent of the color of dark figs--bubbles excitedly from its high carbonation. 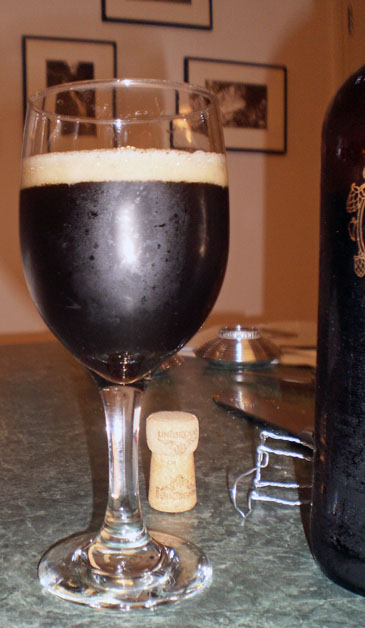 But we need to stop dancing around the real highlight with the Vintage Ale--its taste.  Rich and full of spice and sweetness, this is a strong representation of the style.  No surprise, as it's actually brewed for Trader Joe's by Quebec's preeminent brewery, Unibroue.

I've written before about Belgian strong dark ales, including an excellent choice from Unibroue, their Trois Pistoles.  I would rate that one a little higher than TJ's 2012 Vintage Ale, based on the overall level of balance in the beer, but there's still a lot to like in this seasonal release from Trader Joe's (generally available from early November until it runs out, usually sometime in December).

Admittedly, this style of beer isn't for everyone; I can understand when serious beer drinkers claim to be turned off by the sweetness that can be striking, especially when one is used to drinking mostly bitter, highly-hopped ales.  But this is also a reason why I think this beer could be a good choice for a wine drinker who claims to not enjoy beer.  Sweetness, more so than bitterness, could be a draw for some wine drinkers. 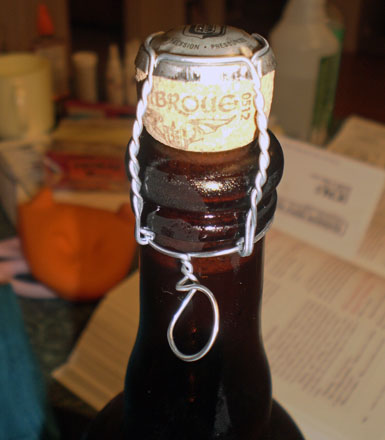 And then there's the big, ripe fruit flavors that dominate the palate with the Vintage Ale.  Common for the style, and here almost as pleasantly complex as with any example of the style, you get hints (pretty brazen ones) of plums and cherries, but with a bit of a chocolatey backbone.  The label also informs that there are spices added; it's hard to nail them down specifically, but I think we've got some of the traditional holiday spices, maybe some clove and nutmeg, maybe some ginger.  That said, I'm not going put the Vintage Ale in the pool as part of my consideration for a new go-to holiday beer since it does not claim to be a holiday beer--but does this beer work as a fine beer to be enjoyed throughout the holiday season, maybe with some holiday celebrations and meals?  You bet.

Again, for the price of $4.99 a bottle, the 2012 version of Trader Joe's Vintage Ale is a great alternative to some of the higher-end (and, admittedly, more well-rounded) versions of the Belgian strong dark ale, like Chimay Blue or Unibroue's Trois Pistoles.  And if you're looking to get a wine-drinker into beer, looking to show someone that not all beer tastes like swill or has to assault the palate with a mouthful of bitter hops (give them time to adjust!), maybe, just maybe, the Vintage Ale can do the job.  And if they're still not sold?  That works, too--more of a good beer for you to drink.
Posted by Masticating Monkey at 12:58 PM