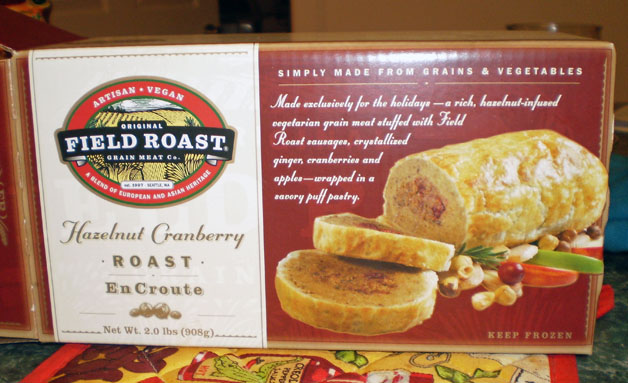 We didn't set out to have a vegetarian Thanksgiving this year.  I believe it has already been well established, after all, that we're all meat eaters here.  For small gatherings during past Thanksgivings, K has made this roasted chicken recipe that I absolutely adore.  (Seriously, make that once and you'll be thanking me for the recommendation.) But this year we were hoping to celebrate with others and eat some fowl we didn't have to cook ourselves.

But as we all know, life doesn't always go according to plans.  K ended up not feeling well, so I took the reigns on Thanksgiving.  And instead of cooking the Zuni Roast Chicken, I decided to keep it simpler (read: manageable by my standards) and focus on the side dishes, including an excellent green bean recipe from The Meatball Shop Cookbook, one I really should devote another post to.

That's all well and good, but it still leaves a hole at the center of Thanksgiving dinner.  My solution to that problem?  Field Roast's Hazelnut Cranberry Roast en Croute.

Yes, it comes in a box.  And it's not exactly cheap.  But I can't say I've ever eaten a meat-substitute product that is so satisfying, both in terms of its taste and its texture.  With Christmas only six days away and New Year's the following week, I know there are people out there--vegetarians and carnivores alike--looking for an easy and tasty centerpiece to their holiday meal.  This is where the Roast en Croute comes in. 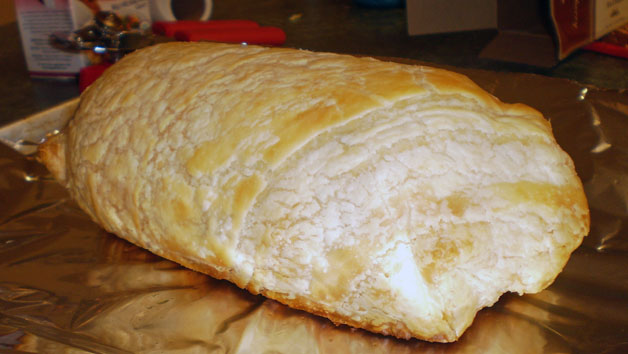 We found the Hazelnut Cranberry Roast en Croute in the frozen foods section of Honest Weight Food Co-op in Albany right before Thanksgiving.  As I said before, it wasn't cheap--$16 for the two pound log--but we'd tried the regular Field Roast Celebration Roast before and trusted this one would be as good, if not better than the classic.

While the cost may at first glance be a bit of a turn-off, in retrospect it really isn't much of an issue.  There is a lot of Roast en Croute in that box; you don't realize this so much until you slice the log and begin eating it.  The combination of puff pastry, wheat gluten, and lentils turns out to be pretty filling, especially with an array of side dishes surrounding it. 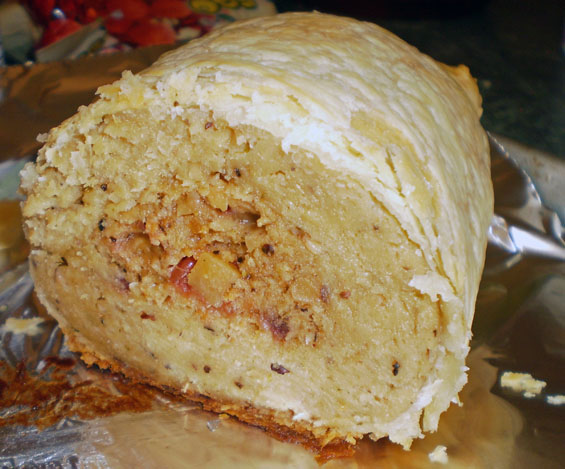 The puff pastry shell is rich and flaky, playing as a great textural contrast to the chewy interior and complementing the grainy, well-spiced layers inside.  Hazelnuts and cranberries are a classic combination that evoke the holiday spirit, and I like how the cranberries are used in the Roast en Croute--whole ones, in the center, as part of the interior layer of the log.  It's nice to get a bite here and there of the cranberries.

The toasted hazelnuts work in great harmony with the other flavors of the Roast en Croute, specifically the garlic, ginger, dried apples, and natural hickory smoke flavor.  Spices used include black pepper, rosemary, sage, and paprika (along with some unnamed "spices"), which lend to the complexity of flavor.  Someone in the Field Roast kitchen put a ton of thought into creating a Roast en Croute that has a sophisticated combination of flavors and fantastic texture from bite to bite.

The Roast en Croute was so simple to cook; I baked it in the oven for just over an hour, and in the meantime finished cooking the stuffing and sweet potatoes.  No, this wasn't your typical turkey or holiday ham, but it was wonderfully satisfying in its own right.  With only two of us here (well, and our disappointed, turkey-loving cat), we had way more than enough food to go around and several servings of the Roast en Croute to reheat over the next few days. 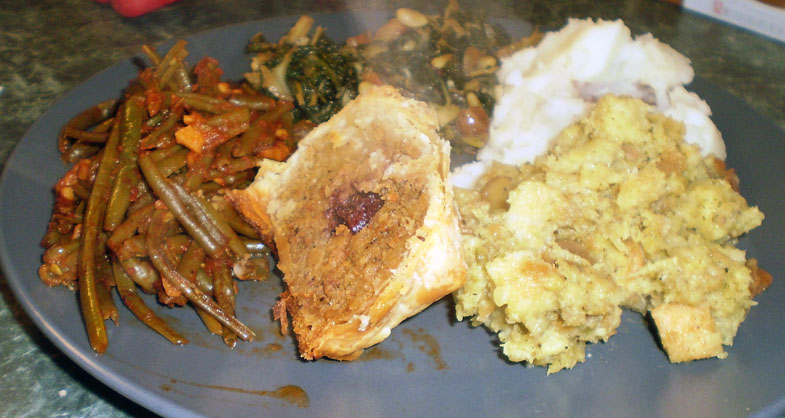 I know that without a big (or even small) bird roasting in the oven, I can't exactly say that I put together a full Thanksgiving dinner on my own.  But these two meat eaters were plenty happy with our centerpiece of Hazelnut Cranberry Roast en Croute, and I'd recommend it to anyone looking for a meat-free alternative for the upcoming holidays.
Posted by Masticating Monkey at 9:45 AM