Maybe I should have saved my braised greens post for after this one.  A sort of cleanse to make up for all this rib talk that's to come.

Yes, ribs.  What carnivores among us don't love them?  Despite that, ribs are one of those foods that I've become a little snobby about.  I had some amazing ones from Oscar's in Springfield, MO, several times between 2006 and 2007, these incredibly smoky, fall-off-the-bone tender ribs cooked in a cart in a supermarket parking lot.  Here's one way of explaining how much we loved these ribs: a few years back, when we were living in Ohio, K was having problems with a dental crown she'd had done in Springfield; she could have gotten it fixed for free if we made the 12-plus hour drive back to Missouri.  No, we didn't want to do that...but we could stop back at Oscar's if we made the trip.  It wasn't enough to sway our decision, but it was part of the conversation.

There are a lot of ways for ribs to be prepared--not to mention the different types of ribs themselves--so I'll admit, what I'm about to say about the ribs at Dinosaur Bar-B-Que in Troy and Shane's Rib Shack in Clifton Park comes from the mouth of someone who swears by hickory-smoked, dry-rubbed, St. Louis-style ribs.  But on my search for a second holy grail of ribs, trust me: I'm not going to leave a rib untasted if I smell smoke in the vicinity of a barbecue joint.  And if you don't trust me, I have a trusty rib-loving cat around to help judge.  We'll hear from him in a minute.

It was the smell of smoke that lured us to Shane's Rib Shack on a recent visit to Clifton Park.  We went there for the DMV, to get K's car registered in New York, and by the time that was done we'd worked up a healthy appetite.  On the way out of PetSmart, where we were scouting for a little sister for Mr. P, we caught a whiff of smoke in the air--not just smoke, but meat being smoked.  Jackpot.

But the source of that smoke?  Not immediately identifiable.  We drove around, saw the Dickey's Barbecue Pit that isn't yet open, looked inside The Meat House (no smoking there, but a lot of other temptations), and finally decided on Shane's.

Funny thing, though.  There was a smoker outside Shane's, but the smell of smoke was missing.  (I still don't know the source of that smoke; does Hannaford do any smoking?)  No matter--we'd wasted enough time and needed to eat.

Service at Shane's is simple.  You order at the counter, take a seat, and your food arrives quickly; little is being cooked to order, after all, at any barbecue restaurant.  K went with the half chicken and sides of mac-n-cheese and baked beans; I got a half rack of ribs with fried okra and sweet potato.  There wasn't much of note regarding the sides; everything was at least decent, while the sweet potatoes could have been eaten as dessert.  The chicken?  Said by Shane's to be "slow-smoked for hours," this wasn't a bad bird by any means, but there wasn't much smoke flavor and the dryness of the white meat indicated that the chicken hadn't been brined.  The skin was well-seasoned, not really soggy or crisp, while the sauce used as a glaze, the regular sauce served at Shane's, is tomato-based and well-balanced, not too sweet.

The ribs at Shane's were pretty disappointing.  I'll give them credit for not being as expensive as most other barbecue places, but I would have happily paid a couple more dollars for some smoke flavor.  While I sat there staring out the window at an unused smoker, I gnawed on my ribs, which had the consistency and flavor of ones that had been boiled.  They were moderately tender, and I was pretty satisfied with the spicy barbecue sauce.  I understand that we're dealing with a chain here, one that has restaurants throughout thirteen states, but that's no excuse for the way these ribs are cooked.  It's not a quality control issue; it looks more like a problem based on Shane's concept of how ribs should be cooked.  You've got a smoker--use it!

Dinosaur Bar-B-Que, a much smaller chain with just a handful of restaurants throughout New York and New Jersey, lured us in this past weekend with their smoke.  Unlike at Shane's, this was the real deal, made clear as we walked past the smoker and watched its attendant tend to the various meats inside.

It's always something to see the abundance of cars parked outside, making it hard not to believe they're doing something right at Dinosaur.  And you can see the surface appeal: there are the views of the Hudson and a nice area for outdoor seating, the spacious interior with its strangely non-uniform decorations throughout.  They serve lots of good beer, and overall Dinosaur just seems like a fine place to enjoy yourself. 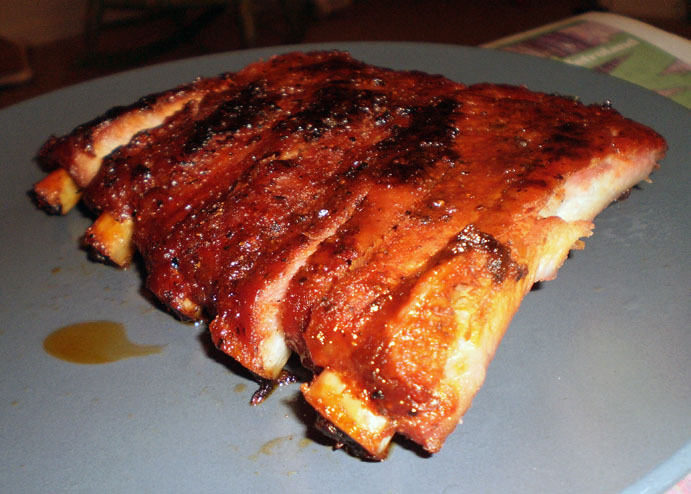 So, how about the food?  You know, it's not bad.  Certainly a step up from Shane's (though you do pay a little more for this).  K and I went with the Sweetheart Deal for Two, a full rack of ribs with four sides for $27.95--not really a bad deal if you're both in the mood for ribs.  For our sides we ordered the soup of the day, a spicy cheddar ale soup, and the maple-whipped sweet potatoes, the chopped salad, and the collard and mustard greens.  The soup was a standout, a super-rich and creamy concoction with a little heat and some of the beer flavor present.  The biggest complaint here is that Dinosaur could afford to be a little more generous with the portion sizes of their sides.

With a full rack of ribs, there was no shortage of meat between the two of us, and we ended up bringing five of the ribs home to eat later.  I like a lot of the ways Dinosaur conceptualizes their ribs: St. Louis-style, marinated for 24 hours with their spice rub, then slow-pit smoked.  As explained on Man v. Food, Dinosaur's ribs are actually transferred from the smoker to a grill, where they're finished off.  Sounds good, but I wonder if this might be part of the toughness issue.

The ribs were smoky, yes.  There was a nice layer of pink from the smoke that bled into the meat.  I liked the flavor from the rub, though it was mild, and the sauces at Dinosaur are all very solid in the same tomato-based style as Shane's.  But the meat on the ribs simply wasn't very tender.  Could it be that they're kind of overcooked through the grilling process?  Was this simply an issue the day we were at Dinosaur, or at this location?  They sure looked tender in that video, so it's hard to know. 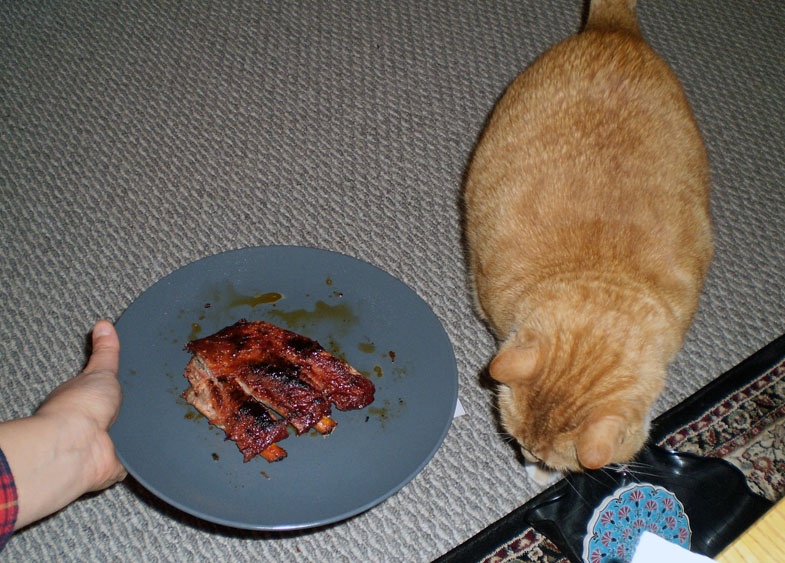 For a final verdict on Dinosaur's ribs, we called on the biggest rib fiend out there, our cat, Mr. P.  It's been a long time since we brought ribs home for him to smell and partake in--some average ones while we were in Ohio, and before that, those ribs mentioned above from Oscar's in Springfield.  This was when Mr. P was just a little guy (not the current heavyweight champion).  We'd recently adopted him and found he had an appetite for certain human foods.  There was no stopping him.

This was most clear the first time we brought Oscar's ribs home.  Mr. P was rabid, foaming at the mouth, practically.  He was on the coffee table we were eating on, climbing on top of us, sticking his face in the ribs if we tried to actually eat.  I had to lock him in the bathroom briefly just so we could finish. 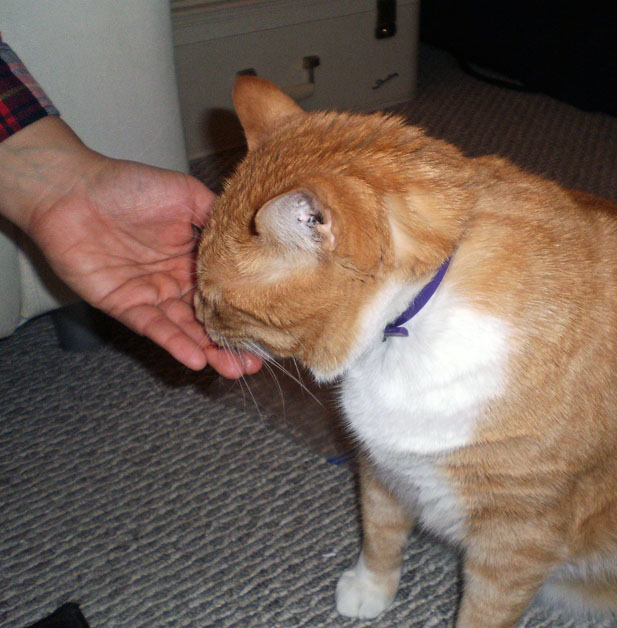 He may be a level or two lower on the crazy scale these days (a little lazier), but Mr. P still loves his pork.  You cook up some bacon and he's on the counter.  Turn your back and he's licking it.  So we were very curious to see his response to the Dinosaur ribs.  There was interest--he came over to see what we had, after we'd reheated them.  But he just sniffed around.  No jumping or climbing, no wildness.

We offered him a tiny piece of meat.  He came over.  Sniffed it.  Got his big nose up in the air.  And walked away.

He came back a few minutes later, ate a small sliver or two, and that was it.  This piggy was not good enough for our piggy.

As for me?  I wouldn't be opposed to a return to Dinosaur, but I don't know if I'd be going for the ribs again.  And if I'm spending more time up in Clifton Park, well, there are a lot of other options up there around the mall.  But this rib story isn't complete; I know there are several independent barbecue joints in the area, and we plan on investigating over time.  The holy grail of ribs may be out there yet.
Posted by Masticating Monkey at 2:45 PM

Email ThisBlogThis!Share to TwitterShare to FacebookShare to Pinterest
Labels: Eating out, Mr. P