In Praise of Brunch at City Beer Hall

It's safe to say that any praise of Albany's City Beer Hall would be, at this point, piling on.  The beer hall/gastropub has been open for about a year-and-a-half now, and huzzahs have come from all corners.  But one thing deserving of a little more attention at City Beer Hall is their weekend brunch, which just started up this summer.  Serious beer lovers who also appreciate good food will be hard-pressed to find a better deal than this one.

Here's the way it works: between 11-3 on Saturdays and Sundays, choose a salad ($9.99), sandwich ($10.99), or plate ($12.99), and with it you receive coffee and your choice of craft beer, mimosa, screwdriver, bloody mary, or freshly-squeezed orange juice.  Sometimes you run across restaurants advertising deals like this that seem too good to be true and, sadly, they are--the restaurant will cut corners in some way, cheap out and serve small portions or uninteresting food.

That's not the case at City Beer Hall.  The food offerings are plentiful and interesting.  The beer?  Full pints of high-quality stuff.  Almost everything on tap is eligible for the deal; sometimes a pint of the beer of your choice would be $7 or $8 at regular price.  If you think of it that way, a burger or other sandwich will only cost you a few bucks.  Like I said before: this is a real deal.

I've been twice now for City Beer Hall's brunch, once with K, and most recently with her and her brother E, visiting from California.  Combined we've tried four items off the brunch menu, so it seems a good time to not just talk about how good the deal is, but about the food and overall experience. 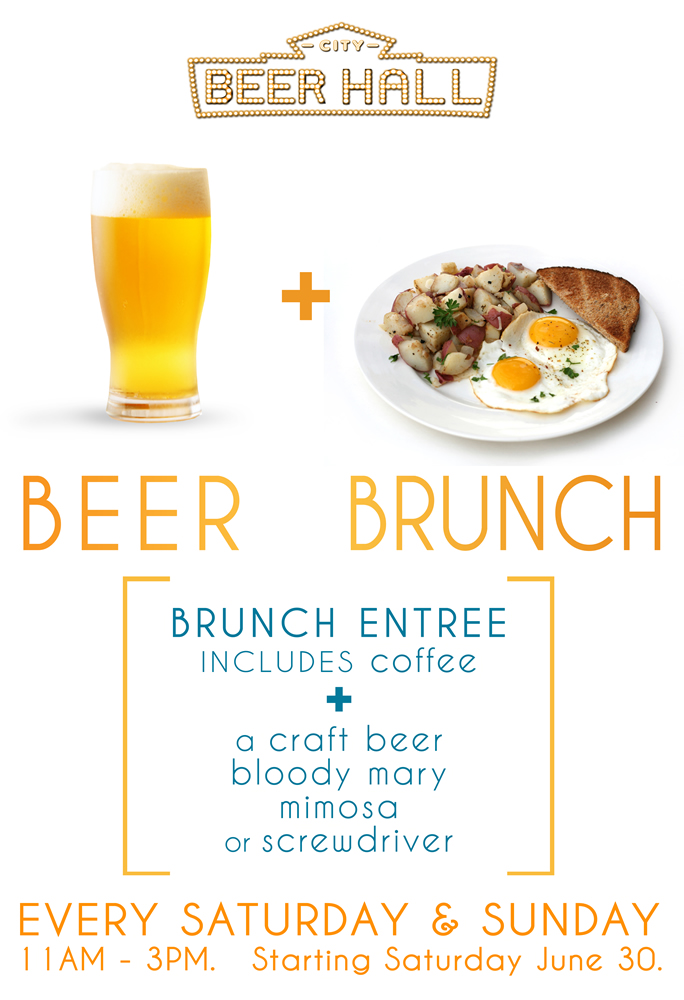 I love the look of City Beer Hall, interior and exterior.  Designed by architect Charles Ogden, the building was erected in 1903, originally housing the Home Telephone Company.  I can't speak for the second floor and its mechanical bull--they only open the first floor for brunch--but what I have seen is a classy combination of retro and modern courtesy of a local company, Silver Fox Salvage.  Silver Fox supplied the attractive wood tables and bench seating for the first floor, along with industrial-chic chandelier lighting.

With the laid-back late-morning/early-afternoon vibe of weekend brunch, some of the television sets not even turned on, this is a comfortable setting.  It's certainly a nice place to settle in and relax, though that's your choice--the service in both of my trips to City Beer Hall has been especially fast.

The first time K and I visited, she had the Roasted Beet Salad, while I went with the 518 Burger.  Having a salad like hers, full of flavorful beets, is what helps separate City Beer Hall from so many middle-of-the-road joints serving their iceberg salads.  This one wasn't perfect--K would have liked some bread with the salad--but those beets went very well with the plentiful serving of arugula and gorgonzola.  And her freshly-squeezed orange juice was bright and tart and pulpy, a great option for folks not in the mood for something boozy with their brunch. 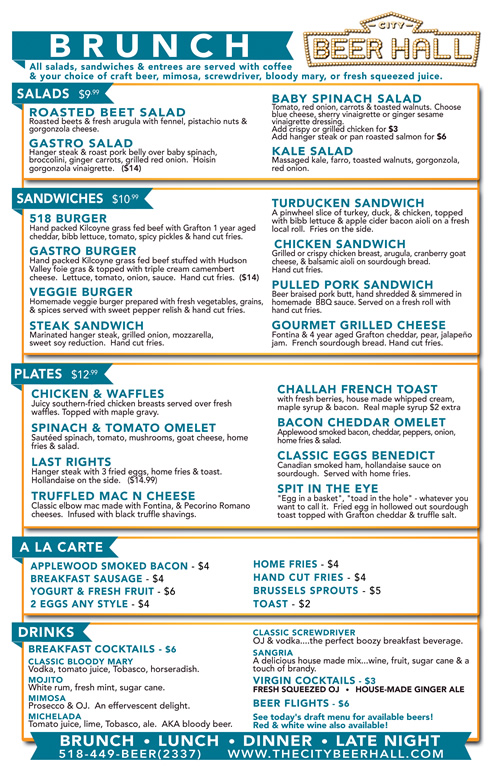 The grass-fed 518 Burger might have been the first reason I got interested in City Beer Hall (other than the "beer" part of their name), having read about it before even making my move out here at the end of July.  And I wasn't disappointed: the hand-formed Kilcoyne Farms beef patty was maybe on the rare side of medium-rare, but it was packed with a lean, meaty, grassy flavor, a little too juicy for the bun it was served on.  And the melted Grafton cheddar on top had some bite to it, a nice complement to the meat.  City Beer Hall's fries are definitely near the top of the list of ones I've tried so far in the Capital Region, properly crisped up and not too thick.

Our second trip proved an opportunity to branch out into different parts of the brunch menu.  K went with a breakfast option, the Classic Eggs Benedict.  This dish wasn't bad, but she thought it could have been improved on a couple levels: the single slice of sourdough was good but kind of small for this meal--the two eggs were piled on top of this single slice, instead of the typical two halves of an English muffin--and the Canadian bacon seemed to be just a single slice of ham, not the usual rounds of Canadian bacon that come with eggs benedict.  The hollandaise sauce was good, though, and the home fries were excellent--reminiscent of tater tots with the way they were cut into small squares and then deep fried.

E and I both went with the Turducken Sandwich, which features a pinwheel mix of turkey, duck, and chicken, served on a soft roll with lettuce and an apple cider bacon aioli.  All the components here worked in harmony (any aioli that dripped to the plate turned into an excellent dip for the fries), though E and I agreed that the turkey part of the pinwheel was a little dry.  Turkey has a tendency to come out dry, but it would be nice to see City Beer Hall figure out a way to prevent that here.  Still, it was a generally satisfying sandwich, unique and mostly well-executed. 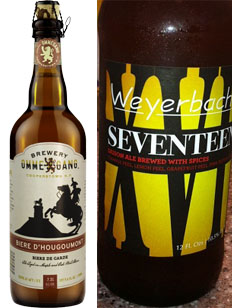 It would be remiss of me to wrap up without mentioning the beers I had at City Beer Hall, which really did turn what would have been good brunches into very good ones.  The first time I had Ommegang's D'Hougoumont, a limited-release farmhouse-style ale that was pretty complex, with a lot of different yeasty and malty notes complementing the background hints of maple and oak, remnants of the aging process for this beer.

I was even more taken by my most recent selection at City Beer Hall, another limited release, this time the Seventeen anniversary saison from Weyerbacher.  A huge beer for the style, Seventeen checks in at 10.5% ABV, though that number is completely masked by the yeasty, grassy flavors common to the style.  I'm always a sucker for the spices and funk of a saison, and with the way this one warms you from the high ABV, it's maybe more like a tripel than a saison.

I'm eager to see City Beer Hall at night, try some different items off their menu, particularly some of the small plates.  But the weekend brunch is such a great deal, highlighted by the beer but not let down by the food offerings, that it's hard to think of going there at a different time.  I'm sure that's not the intended goal of City Beer Hall in offering the brunch, but it certainly has been one way to win some new fans.