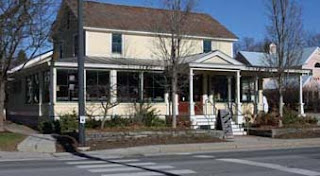 It's a subject I've touched on before, one I'm curious about because of how unquantifiable it is: the way outside factors, other than the food, can muddle one's memories of a dining experience, elevate good food to magnificent (or the opposite).

None of us are immune to this way of thinking, and I'll admit I could have fallen into this trap with the Depot 62 Cafe when we visited Manchester, VT, last month.  This is a restaurant we chose primarily based off of some positively glowing Yelp reviews.  We'd just wrapped up our Washington County Cheese Tour, and instead of heading straight home, figured we might as well swing by Manchester Center for shopping and dinner.  There'd been a threat of rain all day, but we were lucky on the farms--nothing more than a moment of drizzle while driving between them.  The sun even came out while we were at Consider Bardwell.

Things started to change while we were in Manchester, poking around shops featuring the quaint and overpriced.  We heard on the radio of a tornado watch, and soon a black cloud, the likes of which I hadn't seen since Kansas, crept out from behind a mountain to block the last of the day's sunlight.  And then, while we were looking around the Manchester Sports and Clothing Co. store, the skies opened.

At the risk of ruining a rare moment of chivalry by talking about it, I'll mention here that I was the only one who had taken my raincoat from the car that afternoon.  K and her friend, F, who was visiting us, had left theirs behind.  So I ran from the store back to our car--which had seemed a lot closer in my memory--to bring theirs over.  The roads in Manchester were torn up, cordoned off in places, under construction.  I found myself leaping into muddy rapids of water that were filling the streets, and by the time I returned to the store, my jeans and sneakers were both completely soaked.

"You brought the car over, right?" they asked.  I said no, tried to explain that there was too much construction, watched as their faces fell.

"It looks close on the map," I said of Depot 62.  "It's probably easier just to walk."  Of course, this was one of those cartoony, tourist-town maps, so nothing was drawn to scale.

Though the rain had eased up a bit, we arrived at Depot 62 wet and cold after about a fifteen-minute walk.  Did we let this negatively affect our experience?  I like to think not--we were awfully hungry, after all, and just happy to sit down in a dry space.  And ultimately, we enjoyed most of what we ordered.  But was it as amazing as some reviews suggested?  I'm not sure about that.

I tend to not care much about the decor or aesthetics of a restaurant unless something really stands out.  With Depot 62, this is definitely a topic worth mentioning.  If you Google the restaurant, you'll first find the cafe's website.  The second search result, though, will be for Depot 62's store, which features "Exquisite European and Mediterranean Rugs and Home Furnishings," according to their website.   The store and the cafe are connected; we found out upon entering that you're basically dining in the showroom, with the restaurant's brick oven the centerpiece.

I'm just happy that we were actually allowed to dine in the cafe despite depositing a trail of water along the concrete floor.  No two tables or sets of chairs were alike; they all seemed grand and beautifully-carved, and an array of unique objects, from lamps to chandeliers, surrounded us.  I can't remember the last time I dined in such a unique setting.  Despite how lovely it all was, there was no hint of pretension to be found at Depot 62.

After a long day on cheese farms and walking around Manchester, we quickly ignored the lovely decor and focused our attention on the menu at Depot 62.  Having not tried the pizzas at Ali Baba in Troy the night before, we decided to share a couple of them at Depot 62 (the Taste of Anatolia and the Wild Mushrooms) and a trio of appetizers (the Smoked Eggplant, the Roman Beans, and the Arugula Salad).

The salad was simple but nice, served with two choices of dressing: lemon and pomegranate.  I opted for the lemon, which was pleasantly tart and a good match for the spicy arugula and shaved parmesan, while K was a fan of the pomegranate.  The eggplant, Depot 62's version of baba ghanoush, had a fairly smooth consistency and a bit of smokiness to complement the eggplant flavor.  The Roman Beans, cooked with carrots, parsley, and lemon juice, were rather simple and bland.  After having the huge lavash bread at Ali Baba the night before, it was impossible to not be a little disappointed by the smaller size of the pita served with the appetizers at Depot 62 (the same pitas used to make our pizzas, in fact), though they were quite good and hot out of the brick oven, perfect for dipping into the smoked eggplant. 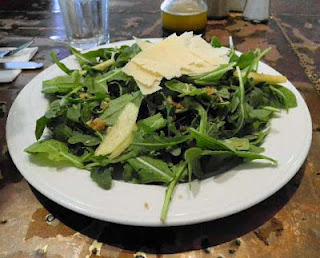 There was no problem with the flavor of the Taste of Anatolia pizza.  The pita crust, crisped and browned in Depot 62's brick oven, featured a heaping amount of ground lamb.  I love the taste of lamb, and here it really shined, accented nicely by minced onion and chopped parsley.  It was even better with salt and pepper tossed on it and lemon squeezed over the top.  As you'd expect with lamb, it was somewhat oily and made this a pizza better eaten with a fork and knife than with your hands.

The Wild Mushroom pizza featured mostly portobellas on top of caramelized onions and mozzarella.  The portobellas added a good meatiness, while the onions balanced them out with some sweetness.  For the price ($15.95), it would have been nice to get a wider variety of mushrooms, but the pizza worked pretty nicely as it was.

We certainly enjoyed our meal at Depot 62, and I can appreciate the simplicity of the appetizers and the use of some local ingredients (such as the lamb).  But some of the reviews out there seem a little over-the-top, such as one Suvir Saran (one of my favorite chefs from season three of Top Chef: Masters) wrote a couple years back.  And Liz Bomze showed great exuberance for Depot 62 in her review of the restaurant for Serious Eats; then again, she was reminiscing about dinner with Christopher Kimball and others from America's Test Kitchen.

If we hadn't been so wet, might we have been bursting with enthusiasm too after our meal?  It's impossible to know, but no matter: Depot 62 is certainly a restaurant worth checking out, easily one of the more interesting options available in Manchester.

Depot 62 Bistro and Cafe is located at 515 Depot Street in Manchester Center, VT
Posted by Masticating Monkey at 11:40 AM