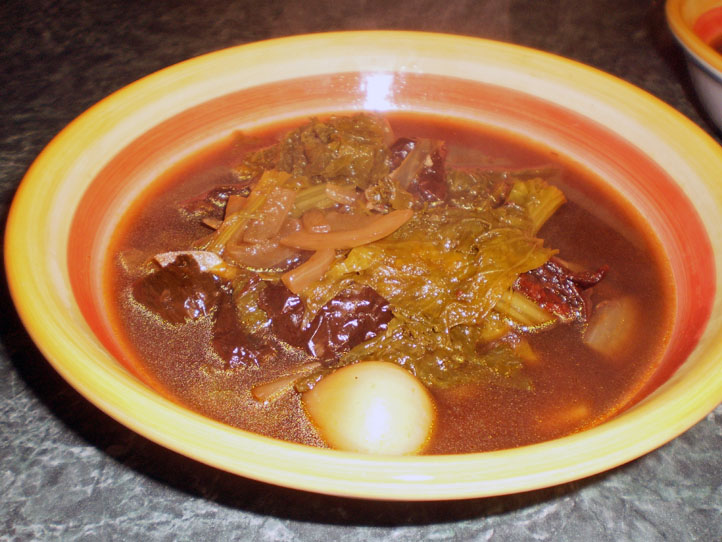 I'm guilty of it, and I know I'm not alone: I could stand to eat more greens.

More often than not, any excuse I throw out there is going to be lame.  Salad can be boring, meat and a side of carbs is always fun.  Vegetables?  Healthy, sure, but it can take effort to make something interesting of them.

I know these aren't good excuses, so I'm always on the lookout for ways to jazz up greens without that much effort.  My new favorite way to do this?  Braising greens, southern-style.  And since there are so many variations on this theme, my plan is to cook more and more of them and post those recipes here.

There are--and I might be low-balling it here--around a million different ways you can braise greens, so I'm not about to try to list them all right here.  I just want to talk about one method courtesy of chef Chris Cosentino, who you might know as the newly-minted winner of Season 4 of Top Chef Masters or from the Next Iron Chef show on Food Network. 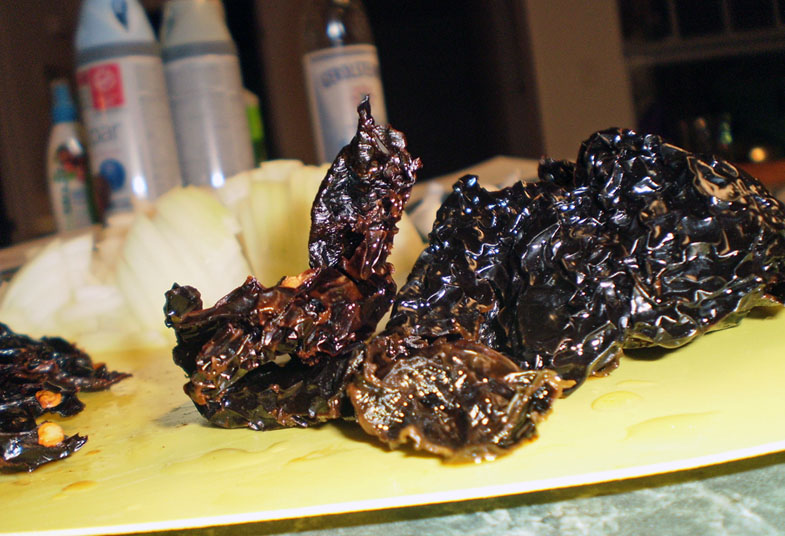 At first glance, Cosentino is a surprising chef to turn to for a recipe featuring greens.  He might be best known for his affinity for offal (find him on Twitter @offalchris), described by Cosentino as "those parts of a meat animal which are used as food but which are not skeletal muscle"--think brains, heart, lungs, and feet.  Not only does his Braised Dandelion Greens recipe not contain any offal, it can easily be turned vegetarian, so long as you swap out the chicken stock.

Cosentino's Braised Dandelion Greens may not be so southern-style, as they don't include ham or vinegar.  Those are two hallmarks of true southern-style greens--they're often cooked with ham hocks or bacon for flavoring, and the sourness of vinegar at first may seem unusual, but it really does work beautifully as part of the whole mix.  That doesn't mean a recipe has to include these items, though.  Cosentino shows here how you can have fun playing off of variations on the traditional theme and still pack a ton of flavor into greens. 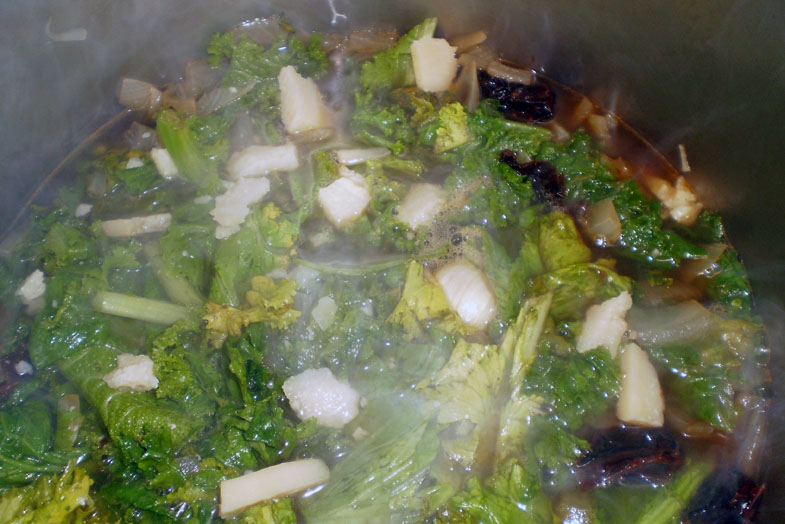 The flavor in Cosentino's recipe is very much derived from the peppers used.  The last time I made it, I used only ancho chiles, instead of mixing in some guajillo chiles, too, as the recipe suggested.  But there are so many varieties of dried peppers (I picked mine up at the Fresh Market in Latham, where they have a nice selection alongside the dried mushrooms, but it's even better if you can pick the dried peppers loose, individually).  Judging from the open-minded nature of his cooking style on Top Chef Masters, I'm sure Cosentino would be into the idea of mixing and matching different peppers, but the ancho chiles work really well here, bringing the smokiness that you'd normally get in such a recipe from bacon, and just a little bit of heat, depending on how well you seed the peppers.

Another variation to consider is the type of greens used.  Cosentino's recipe calls for dandelion greens, though I don't think those are my favorite for this type of southern greens recipe.  Collard greens are traditional and really do cook nicely in this style, but kale brings a different texture and flavor--a little more bitter (at least when raw), a little chewier with the thicker leaves.  But just like with dandelion greens, slow-cooking them really does diminish any bitterness.  You really need to make sure your broth is flavorful in a dish like this. 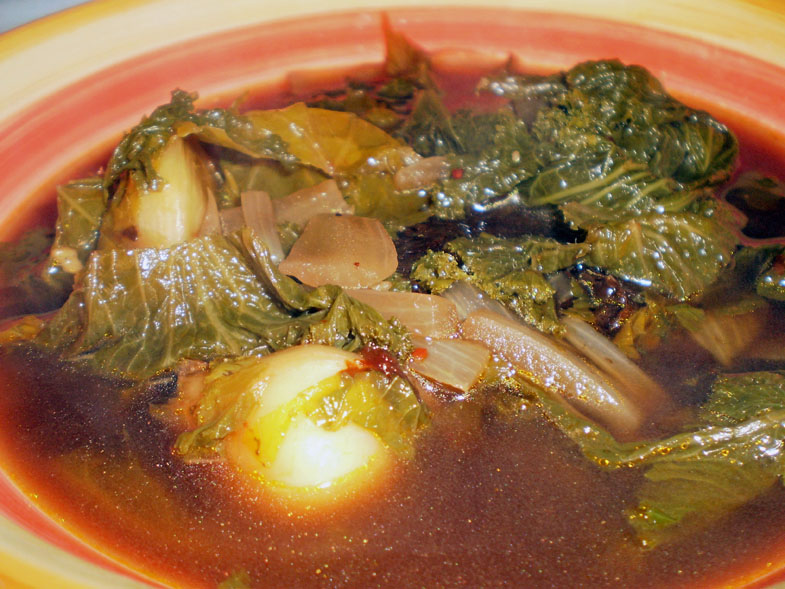 The first time I made the recipe, we had a container of chicken stock with shiitake mushrooms in the refrigerator, needing to be used.  So instead of using stock from a can/carton, I used what we already had--mushrooms and all.  A little unorthodox?  Sure, but they worked surprisingly well, adding a sort of meatiness to the dish.  Again, I want to emphasize that the recipe here is a starter--there are so many ways you can play around with it without ruining the essence of what Cosentino is going for.

The broth will be quite rich as it is if you follow the recipe--the combination of chicken stock, peppers, garlic, onion, and pecorino/parmigiano rind makes that happen.  The lemon that Cosentino suggests rubbing on the grilled bread can cut that richness a little, but I don't think that's necessary.  For this most recent version, I didn't use lemon and didn't bother to grill the slice of baguette, either.

I'd love to hear how readers prefer their greens--any interesting methods or tricks used.  I certainly recommend Cosentino's recipe, linked to below from Food and Wine, where I originally found it.  But the most important point when it comes to cooking greens is to have fun, improvise, and just see how things play out.