My Grandmother's Ravioli: Not Your Average Food Show 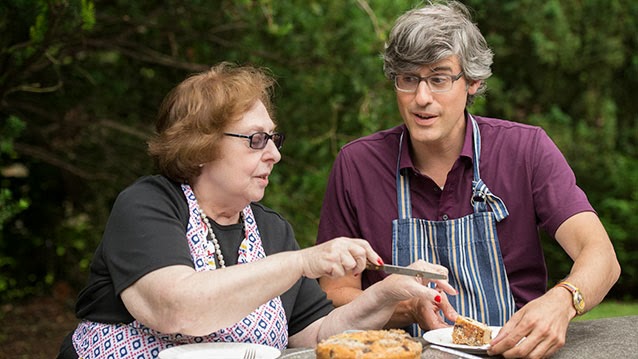 I've been meaning to write about food-related TV programs since I started this blog, but here we are, more than a year after I started the thing, and still nothing on that front.

Until now.  I'm happy to say that I was inspired to finally write about a TV show because I found one--new to me, though now in its second season--that I've truly fallen for: My Grandmother's Ravioli, hosted by Mo Rocca, currently airing both new episodes and reruns on Wednesday nights on the Cooking Channel.

I knew Rocca from his Daily Show days and his appearances on NPR's Wait Wait...Don't Tell Me!, which seems a bit of an unusual path to food TV.  Nevertheless, he slides seamlessly into this role.

My Grandmother's Ravioli is a show that's full of both humor and heart.  The premise is that Rocca "learns to cook and discover[s] treasured family recipes and stories from grandparents in their kitchens across the country."  This certainly is a different concept than what we see across the Food Network and Cooking Channel's typical programming (they're both Scripps-owned and share shows and talent), which is an initial plus.  It doesn't feature some loud-mouth host pigging out in restaurants, there isn't some creepy and seemingly fake "stake-out" going on, and nobody is competing with anyone else.

It's just Rocca and a rotating cast of elderly folks who, from what I've seen so far, are sharp, sweet, and laugh-out-loud funny.