I'm not your man for a history lesson, but there are some more obvious facts that explain the way goat curry came to be in the Caribbean.  A huge number of slaves were brought over from Africa to Jamaica in the 17th and 18th centuries, carrying with them the traditions of their homelands.  On top of that, curry was brought to the Caribbean in the 19th century from indentured workers from Britain's sugar industry.  There have been, you might say, a lot of hands in the pot over the years when it comes to Jamaican cuisine, and that appears in remarkably delicious ways when you taste that food now.

But when you're eating some of that food at a place like The Dutch Pot, you're not thinking of all the history that's helped transform it into what it is.  You're busy sucking the last bits of meat off the bone and scooping the last drops of sauce onto your rice because this food is so damn tasty.

The Dutch Pot is tucked into a small storefront with tall windows on Madison Avenue, just off the corner from Lark Street in a location that seems to have had some bad luck in the past.  There are only a couple small tables inside, but living a good 15-20 minutes from downtown, we chose to plant ourselves and eat out of our take-out trays.  Nothing wrong with that--you can sit down with Metroland, do some good people-watching while waiting.  And take in the smells coming from the kitchen.

The menu features some salads and wraps, all of which I'm sure are fine and good pickups for lunch if you work in the area, but K and I were there for dinner and wanted to go for the heart of The Dutch Pot's menu, the meat dinners served with rice and peas and a side.  One of the few disappointments of our meal, I should note here, is that the roti listed on the menu (as both an appetizer and entree) isn't served anymore at the restaurant.  Talk about another global food connection, though; I wrote about my love of roti in my post about Malaysian food.

It was a tough choice when looking at the dinner options, but I went with the curried goat with a side of fried plantains; K had the oxtail with a side of cabbage.  We waited around 15-20 minutes for our food, but there were a couple takeout orders in front of us.  This is a small operation--just one woman working up front (and frequently slipping back into the kitchen) and one young man in the back.  According to Danielle of The Dutch Pot in a response to a customer's comments on Yelp, all the stews are cooked in dutch pots, while the jerk chicken "is done the proper way, on the grill!"  I don't doubt the authenticity here, and the time put into the cooking of the stews and curries is obvious once you taste them.

My goat curry was full of rich flavor from stewing for several hours, the meat tender and in some cases literally falling off the bones.  I love the gamey qualities of goat meat, which do manage to break through the spiciness of the gravy.  Yes, goat can be a pain to eat with the relatively small bones, but I think it's worth the little extra effort (and sometimes it just tastes better when you pick up one of those bones so you can really rip the meat off and get all the flavor).  The same can be said for K's oxtail, another delectable yet typically underrepresented meat in American cuisine.  Oxtail requires slow-cooking for tenderness, but the reward is what some call one of the most flavorful parts of a cow. And that's what we got at The Dutch Pot.  The oxtail was so infused with the elements of the sauce it had been stewed in, but the meat itself was rich and fatty.

The sauce served with both of our dishes was effectively spicy, the heat cutting through that richness from the fat rendered off of our meats.  I don't know the recipe, obviously, but the curry sauce was filled with the flavors associated with traditional Jamaican curry--the heat from the scotch bonnet peppers, the earthiness of the curry, the extra kick from the allspice.  An oxtail stew recipe shows a sauce awfully similar to the curry (minus the curry itself), one that worked in perfect harmony with the oxtail meat. 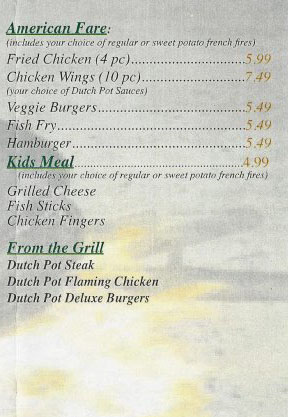 The fried plantains served on the side of my dish were generous in portion-size and perfectly cooked, plated in long slices.  There's just something about the way a ripe plantain's flavor jumps when fried, the fruit's sugars creating an appealing glaze on the outside of the plantains.  K's cabbage was mixed with thin slices of carrots and was pleasantly crunchy.  It blended with the rice and peas, all of which served as a fine way to scoop up the remainders of the sauce from her oxtail.

We were both very satisfied with our dinners at The Dutch Pot and are eager to return, maybe sample some seasonal fare (such as changing soups).  We also are eager to try some of the other talked-about Caribbean restaurants in the region, see how they all compare.  But even as a Jamaican food novice, I think I can safely--and highly--recommend the food at The Dutch Pot.

The Dutch Pot is located at 418 Madison Avenue in Albany
Posted by Masticating Monkey at 10:12 AM