Nanola's odd name is a combination of "nanotech," since the Malta area is known for housing that industry, and "Nola," an abbreviation for New Orleans.  Opened late in the fall of 2013, Nanola has connections to the old Bayou Cafe in Albany (that space now houses The Hollow, which I actually do like).  After my visit to Nanola, I heard some bad things about the Bayou; I only wish I'd known those before this experience.

I don't have any personal connection to New Orleans' creole and cajun cuisine; I've never even been to Louisiana.  I've always had a fondness for the flavors and styles of many of the dishes associated with New Orleans, though.  It didn't hurt my optimism that Nanola also has a pretty good beer list, so I started my meal off by ordering a pint of Ballast Point Sculpin.  This is one of the best IPAs you can find, a perfect representation of the San Diego style.

That was a good start, but alas, it was all downhill from there.  While studying the menus, we also took in the atmosphere.  There was some good--an old tuba hanging from the ceiling, light fixtures meant to evoke the French Quarter, and windows on an interior wall with printed scenes featuring New Orleans revelry behind them.  K immediately noticed that those printed images were highly pixelated, probably pulled off the Internet and blown up, the kind of shoddy work we'd soon find applied to our food. 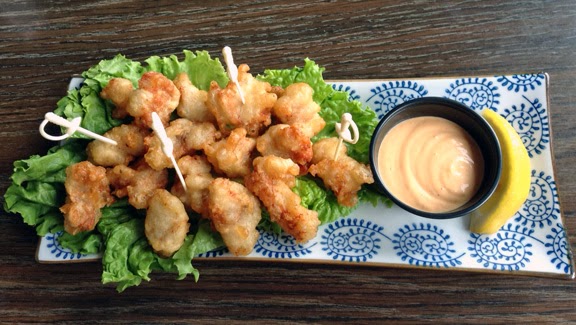 With this image in our minds, we decided to forego the oysters (the thinking was: if a restaurant takes this little care with these images right across from most of the dining tables, then would they take good care with their oysters?) and instead get the alligator bites.  These deep fried pieces of alligator meat were listed as "market price," which turned out to be $10.

I don't know much about the cost of alligator meat, but this felt a little high after trying the appetizer.  There were 14 of these "minuscule" bites, to use K's description, and the ratio of breading to meat was definitely slanted to the side of the breading.  If you want to hear about the breading, head down to K's description of her po' boy; the oysters in there were fried in the same unpleasant style.


Meanwhile, the meat.  This alligator meat--of which there wasn't much--was fine, tender enough, but tasted like pork chop meat.  In fact, K is convinced that it actually was pork, not alligator.  Not that we don't like pork, but it's not what we were expecting.  With no seasoning, not even salt, that left the dipping sauce--which tasted like me to a sriracha aioli--as the sole provider of flavor.  It was fine, but you still need seasoning on the product, and the greasy breading was overpowering.

Not a good start.  K was already feeling disappointed, and then her oyster po' boy arrived.  I swear, I saw some real sadness in her eyes when she saw it.  Let's let her explain why:

My mother taught me to never say food is disgusting. She said that if I was ever served something I found strange or offensive, I should simply say, “That was interesting.” And so I suppose I should say that Nanola’s oyster po’ boy was . . . interesting. 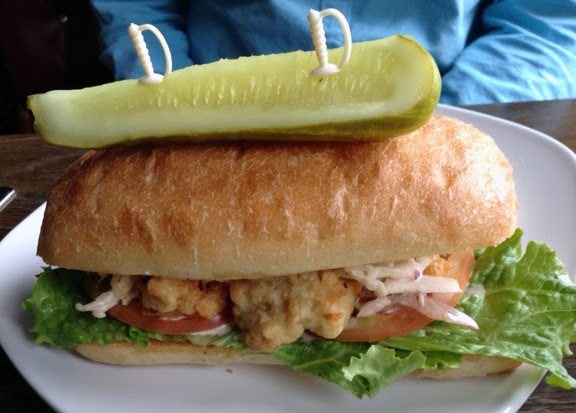 First, there was a pickle speared on top of the sandwich. I have no idea why the chef thought this was a good idea, and I certainly don’t want pickle juice on my bread. The bread was a long ciabatta roll that was dry and difficult to bite through instead of the crusty, fluffy French bread or soft hoagie roll that I’d expected. Then there was coleslaw on my sandwich, which is a serious transgression in and of itself. I despise coleslaw in general, and I especially hate it as a sandwich topping because it seeps its juice onto everything beneath it. Maybe coleslaw can be an okay element on top of cold cuts that won’t soak up the juices, but on top of breaded, fried oysters, it just served to make the breading soggy.

And the oysters were, shall we say, interesting. First, they were really small, and I wondered if they might be canned oysters that had been dunked in a batter and fried, but then one of the oysters was nearly raw, and canned oysters are generally cooked through and slightly chewy. There were four oysters on the sandwich, which is a stingy serving, especially for a sandwich that costs $12. 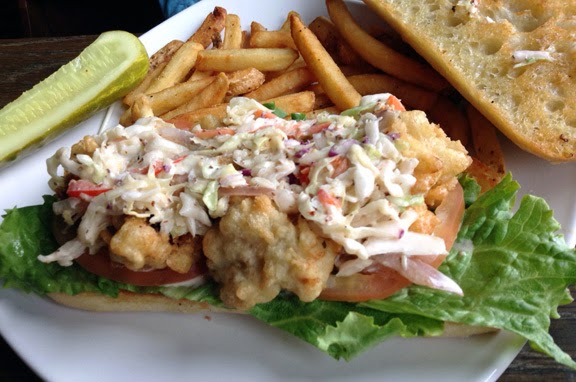 The po’ boy was bulked up with anemic tomatoes, big pieces of romaine, and the aforementioned coleslaw. The oysters were just a minor part of the sandwich, whereas in a good oyster po’ boy the oysters should be the star. When I order a po’ boy, I want a generous serving of oysters, good soft or crusty bread, a tasty remoulade, and maybe some lettuce for coolness and crispness. Traditionally, the oysters in a po’ boy are fried in a cornmeal batter, but in this case the batter was greasy, puffy, and tasteless with no cornmeal. When I plucked an oyster off the sandwich and tried it on its own, the predominant flavor of the batter was grease (with a slight hint of coleslaw drippings).

Oh, and there was no sauce of any kind on the sandwich. I guess the coleslaw was supposed to just drip its mayo slime onto the oysters, but, as I’ve already mentioned, this just created sogginess with no boost in flavor. Sorry, Mom, but this sandwich was disgusting.

So there was that.  And then there was my jambalaya.  I shouldn't have even ordered it, considering the cost--$14 plus a two-dollar addition for shrimp--felt too high.  But I did order it, and I received this: 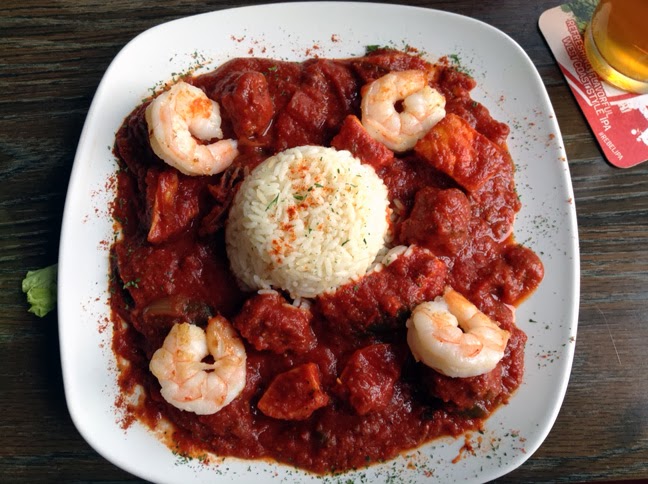 Not unattractive plating.  Except that is not what jambalaya is supposed to look like.  A quick Google image search reveals just how wrong Nanola's version is.  I can see the thinking behind the scenes at Nanola right now.  "Let's make this 'fancy' so we can charge more for it.  Put some white rice down in the middle.  Who wants that messy looking stuff anyway?"

Point #1: If you don't know what jambalaya is--or, for that matter, if you don't know how to make a po' boy properly--then you probably shouldn't open a New Orleans-themed restaurant.  Honestly, I find the failings of The Capital pale in contrast to these at Nanola; these are such fundamental mistakes, blatant examples of ignorance of the cuisine, that I think it's an insult the customers who patronize this establishment.  At least at The Capital they were trying some interesting, different things.

You don't have to have even visited New Orleans to know what jambalaya should look--let alone taste--like.  Turn on the Food Network.  Hell, read the recipe right on the Food Network page if you're a chef and have never made it before.  Instead, I get the sense that the owners of Nanola figure that if enough patrons come to drink alcohol and listen to live music, diners there won't care what the food is like.

In effect, they're telling all of us diners in the Capital Region that we're too ignorant, too uncultured, to know any better.  (Or they don't have a clue, which is just crazy to think about.)  Of course, if we're willing to just come on right back after a bad experience, maybe they're right.  I just want diners out here to be tougher, more honest with themselves and with restaurants.  Somebody has to hold restaurateurs to some standards.  We already know it's not going to come from any of the mainstream media in the area.  That's why I write pieces like this, after all.  Not to be a jerk, but to hopefully help push others to care a little more.


Anyway, Point #2: Even if you're going to stray from tradition, you can still make something taste good.  Nanola couldn't pull that off, either, with this jambalaya.  The chunks of chicken were bland, the shrimp was cooked okay but not really integrated into the dish, the andouille sausage was fine (tough to screw that up if you're not making it yourself), and the vegetables were minimal--just a handful of green bell pepper pieces scattered about.

The major issue was the sauce.  This was a tomato sauce, probably just canned tomato puree, and it was really one-note.  Or two-note, I guess.  There was the tomato, somewhat harsh and bitter tasting, and there was heat, seemingly from cayenne powder.  It was no more complex than that, which is disappointing when considering the herb blend that typically goes into jambalaya.  At this point, I think it's clear why we gave up on the idea of ordering beignets.

Finally--though I should say this isn't my biggest concern, just a minor peeve--I got the bill (on an iPad, so it wasn't as if they were expecting people to pay by bills and coins) and found that it had been rounded up by nine cents to the nearest quarter.  This isn't entirely unusual, for this area or elsewhere, but it's still off-putting to see this "rounding adjustment" on the bill, particularly when it's not about A) trying to get lines to move more quickly, like in the Chipotle case, or B) trying to eliminate change.  With prices like those listed above, it's not as if people are often going to be paying with cash at Nanola.

Of course, unless there are serious changes made in the quality of food at Nanola, I don't think people should--or will--be paying for much food there going forward, no matter what the method of payment.  And if the business can't stay afloat on the back of its alcohol offerings, then I hope the owners make the most of the extra change they collected from customers.
Posted by Masticating Monkey at 2:35 PM