A Disappointing Meal at The Capital American Eatery and Lounge

The process of discovery has been one of the most enjoyable aspects of writing my Eat This! articles for All Over Albany.  Being fairly new to the area, it's given extra incentive to searching the region for good dishes--sometimes at new restaurants, sometimes at restaurants that are just new to me.

But the flip side of this is that there are a lot of restaurants I've checked out that turn out to be mediocre or worse.  Often, these experiences don't warrant mentioning (well, maybe if I had more free time to work on my blog they would)--but when an experience is particularly notable for all the wrong reasons, I think it's worth discussing here.

And that's the case with our recent visit to The Capital American Eatery & Lounge in downtown Albany.  Sure, there was some good to be had--I certainly liked the pint of the Ithaca Flower Power IPA I had--but K and I found such frustration with our food that in a first, she's going to be contributing her own extensive account of what was wrong with her dish.

Before that, let me set things up and give my take on things.  We'd had our eye on The Capital since its opening late last summer; from the look of the menu, to the attractive interior and the appealing beer list, this sounded like the kind of place we'd happily welcome to the dining scene in Albany.  They offer locally-grown products and feature a list of draft beers all from the state of New York; I love seeing restaurants out here actually highlight locally- and regionally-sourced products.


I was interested in the Char-Grilled Cornish Game Hen as a possible dish to write about for Eat This, but more on that later.  We decided to start with the New York State Cheese Board ($12).  Featuring a chevre from Nettle Meadow Farm and the Hudson Valley Camembert and Ewe's Blue from Old Chatham Sheepherding Co., we were pleased with all three of these cheeses, particularly the camembert.

Still, The Capital even managed to screw up this cheese board.  "How is that possible?" you might be asking.  Well, the major issue was the roast beef, which was supposed to be smoked, according to the menu, but didn't taste of smoke, beef, or anything, really.  It was rolled up, sliced too thick, and difficult to cut with our dinner knives, let alone chew.

K ordered what she thought was a pretty safe dish, one we both expected to be good, the short ribs ($16).  How does a restaurant ruin such a dish?  Let's let K tell the story.  This is worth reading.

At the Capital American Eatery I was served very disappointing short ribs. The plate came out with one rib on it, the meat looking firm, and a large blob of fat encapsulating one entire side of the rib. The dish also came with a steak knife. I believe short ribs are often served with this kind of knife, but in general the diner is not sawing away at the short rib as if it were an old oak that had to be sawed down before it crashed through a roof.

I poked at the meat, and it did not move. It was a solid mass. There was no falling off the bone here. It had to be hacked off the bone. I cut a slice (a slice of short rib! Not a soft, tender bite of fatty, rich meat) and stared down at a grayish-brown piece of meat on my fork. Although the dish was advertised as being served in a burgundy sauce, the stingy serving of sauce resided on the mound of mashed potatoes below the short rib. 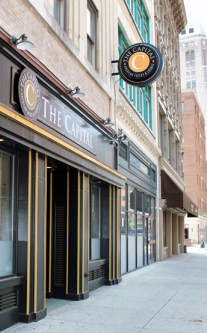 The meat tasted like an unseasoned, overcooked piece of steak that had been zapped in the microwave. There was no detectable salt on the meat, and without dunking it into the mashed potato/burgundy sauce beneath it, it was almost flavorless. I cut another piece, and the knife went more smoothly through the meat (no hacking this time), and then I realized that what I’d speared onto my fork was a hunk of fat.

The rib needed a few more hours of cook time. I would honestly guess three or four more hours would be necessary in order for the meat to soften and the fat to melt into the cooking liquid. The meat was also drastically under-seasoned, and I couldn’t remedy this because there were no salt and pepper shakers on the table. I searched nearby tables for condiments, but there were none.

I thought about whether to even ask for salt and pepper. A restaurant that doesn’t place these condiments on the table has a certain level of confidence that their food is seasoned to perfection. Yet I was hungry and felt that leaving my entire meal behind would be a waste of money. Finally, I asked the waitress if they might have salt and pepper. She looked a bit surprised but immediately fetched salt and pepper shakers for me from behind the bar.

The salt helped a bit, but I could only eat a few more bites of the short ribs. The pieces I cut off alternated between hard slices that tasted like overcooked steak and globs of fat. I ultimately left about 60% of my meal behind (the only thing I ate all of on the plate were the mashed potatoes). There were too many execution errors in this dish; it simply wasn’t ready to be presented to a diner. I appreciate the idea of offering a homey, hearty dish, but the chefs need to make sure to give a dish like this the time it needs to cook and to properly season their food.

I probably don't need to say much after that thorough take-down of the mistakes made by The Capital, but the problem is that my Char-Grilled Cornish Game Hen ($14) might have been even worse than the short ribs, for the main reason that it tasted wrong enough that K speculated that it might be spoiled.  She described it as a rancid sourness.  (In fact, parts of the bird seemed to have not been cooked through.)  I ended up leaving much of it uneaten, partly because of the rawness, but primarily because I'd given up on it tasting good enough to consume. 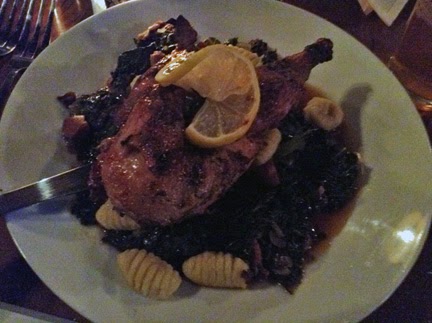 The game hen had piqued my interest because I know this can be a very tasty bird, but the description on the menu--marinated in herbs and dry vermouth and served with spinach gnocchi and tossed with braised kale and bacon--made this sound inventive, unique, and potentially really good, just the kind of dish I like to highlight in my Eat This articles.

I don't think the game hen was actually spoiled.  Instead, I'm guessing that something just went wrong in terms of the way this dish was conceptualized or in terms of how the vermouth was used.  Neither K or I are drinkers of dry vermouth, so maybe it was just that the flavor of it was too strong and aggressive for our palates in this dish.  Even if that's situation, it's the responsibility of the chef to find a good balance of flavors--including the vermouth--and that was just not happening here.

On top of that, the gnocchi was very bland, seemingly boiled and unseasoned and then tossed on the plate.  And the kale and bacon mixture was incredibly off-putting as it was disgustingly gritty.  Gritty from what, exactly?  Who knows--perhaps the kale wasn't properly cleaned, but I can't be sure.  I got bites of the grit multiple times--probably about half a dozen--before I gave up on the kale.

This was a rather grand failure on just about every front by The Capital, which is a shame because we were so hopeful.  And this is a very nice use of the space, highlighted by a rather large, open bar area at the rear of the restaurant, which seemed both popular and well-stocked in terms of beer, wine, and spirits.

However, if the plan is to showcase both the food and the alcohol, a lot more effort and care needs to be put into the food at The Capital.

The Capital American Eatery & Lounge is located at 55 N. Pearl Street in Albany

Posted by Masticating Monkey at 12:10 PM

Email ThisBlogThis!Share to TwitterShare to FacebookShare to Pinterest
Labels: Cheese, Eating out