A Glimpse into the Holy Land of Beer, aka Vermont


A couple weeks ago I detailed the eating portion of my first weekend trip to Vermont, a stroll through Burlington and nearby parts.  Very tasty.  But to be honest, I was looking forward to the beer even more than the food on this visit.  Thankfully, as I mentioned in that last post, there are a number of good restaurants that also serve some damn good beer on tap.

It's interesting: judging from the places K and I visited in Burlington--and the many others I read about online--it seems like a good beer list is just par for the course in restaurants, at least in this part of Vermont.  And why not?  There are so many fantastic local breweries, with residents who seem to appreciate good beer and visitors who are making trips to get those beers, that it only makes good business sense for these restaurants to have good beer on tap.

But coming from the Capital Region, where I've found it challenging to find good beer at restaurants that serve anything beyond standard (or worse) pub fare, it was a real pleasure to find some great beers in restaurants that offered some interesting (and tasty) food items on their menu.  But I've already talked about the food; here I want to talk about the beer--including my first taste of an offering from Hill Farmstead and my successful trip to The Alchemist's brewery to pick up some Heady Topper, just a short time before they closed to the public.


On our first night in Burlington, we stopped for dinner at The Farmhouse Tap and Grill in Burlington.  The beer list at this place is crazy good, so considering we ordered a pretty solid amount of food, I thought it was okay to try a couple different local beers.  The first was their only Hill Farmstead beer on tap at the time, the Edward, an American pale ale.

Hill Farmstead's brewery is a little out of the way, so there was no chance to actually get there and stock up on this trip, but I wanted to know if all the fuss--the #1 rated brewery according to Rate Beer, for instance--was justified.  Judging from Edward, I'd say so.  This was a pale ale that was as complex as any I've ever tried, just gorgeous in the glass and substantive in mouthfeel despite the 5.2% ABV.  The citrus from the hops was delicious, grapefruit and orange at just the right level, with the bitterness relatively modest on the back end.  Just thinking about this beer now gets me lustful; I want to spend a night alone with a growler of it.

For my second beer I decided to go a little off the grid, trying what seems to be a very rare beer from Bennington's Northshire Brewery--their Molocchio Sicilian pale ale, which especially piqued my interest because it's brewed with blood oranges.  I liked the idea of that, but ultimately the beer was mediocre.  Thin, and the blood orange didn't really come through all that much--the whole flavor profile was kind of muddled and tinny (maybe too bitter to handle the addition of blood oranges?).  That said, considering we're awfully close to Bennington, I wouldn't be opposed to trying more of what this brewery has to offer if I come across it.

A final note about The Farmhouse itself: the beer list is great here, as I said above, but it's also a wonderful setting overall.  There's a fairly spacious and modestly attractive dining space, plus a beer garden which serves as a great place to have a beer and snack or wait for a table in the restaurant.  I love the vibe of this place; I don't know how better to put it than to say it feels like a spot for adults who appreciate both good food and good beer.  I wish we had more places like this in the Capital Region. 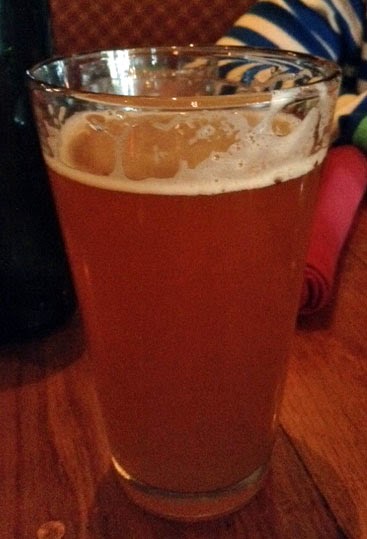 This was on tap at Duino Duende, a hip little joint with some tasty food and a boatload of character in downtown Burlington.  I'd never heard of Fiddlehead Brewing before; it's a small, young (started just over two years ago) brewery based out of Shelburne, VT, just south of Burlington, and headed up by the former head brewer at Magic Hat.  Judging from this lovely IPA, I'd say Fiddlehead is certainly on the right track.

For a 6.2% ABV IPA, the Fiddlehead feels quite full-bodied.  There was a really nice lychee aroma and taste here, a backdrop of grapefruit and just a hint of bitterness.  I could have drank a couple of these if we didn't need to drive back up a mountain a while later that night.  After having the Edward pale ale the night before, I was a little worried that this IPA from Fiddlehead would fall flat.  It didn't.  That's not to say it's at the level of Hill Farmstead right now, but there was a real complexity of flavor here.

I'm looking forward to maybe spending a whole day in the Shelburne area next time we're in this part of Vermont.  Maybe a visit to Shelburne Farms, a stop at the museum, and a trip to the Fiddlehead brewery for a growler fill (no bottles or cans are sold yet) and Folino's for pizza next door. 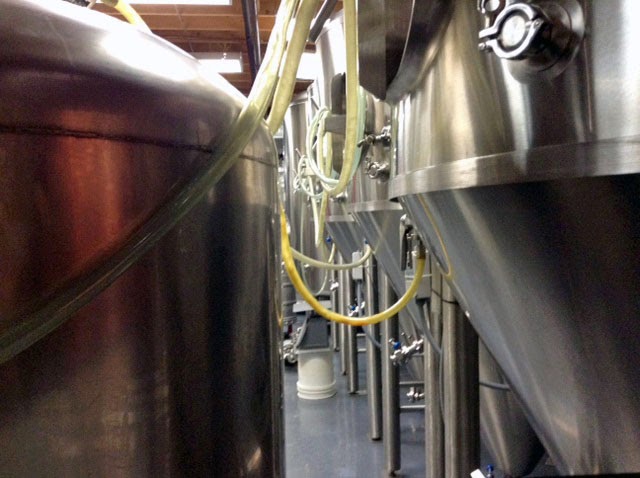 So of course a trip to these parts necessitated the acquisition of the much beloved and hard-to-get Heady Topper Imperial IPA from The Alchemist brewery in Waterbury.  It can be tough to find this beer even in these parts of Vermont--the only place it's distributed as of now--so I wanted to just head straight to the brewery, particularly because we'd already be practically next door at the Ben & Jerry's factory.

Little did I know the brewery would be closed to the public shortly after our visit, making it feel like an even more worthwhile pilgrimage.  And on top of that, after I'd picked up my beer and we were hanging around, sipping our samples and watching the production of the beer in the back, a sign went up saying they'd sold out of all their beer for the week.  Sheesh.  This isn't the kind of luck I'm used to, though I knew all was still right with the world when, on the drive to Burlington from The Alchemist, a small falling rock smacked the windshield of my new (and leased) Honda Civic.

I probably don't need to write too much about the beer--I think there's been enough digital ink spilled over the years fawning over it--but I will say that it lived up to the hype, as much as is possible.  I was mostly just struck by the freshness of it, which isn't surprising since that's what they're striving for with their limited production at The Alchemist.  The hops were just so lively and bright in this beer.  It was like tasting a great IPA on steroids.

How is it even possible to say declaratively that something is THE BEST beer, or even the best of a particular style?  Still, is it worth making the effort to find some Heady Topper?  Oh, yeah.  And even though the brewery is closed for beer sales now, that means more is on the market in regional stores. With release days noted, I'm hoping--for my next trip to the area, of course--that Heady's not that hard to find. 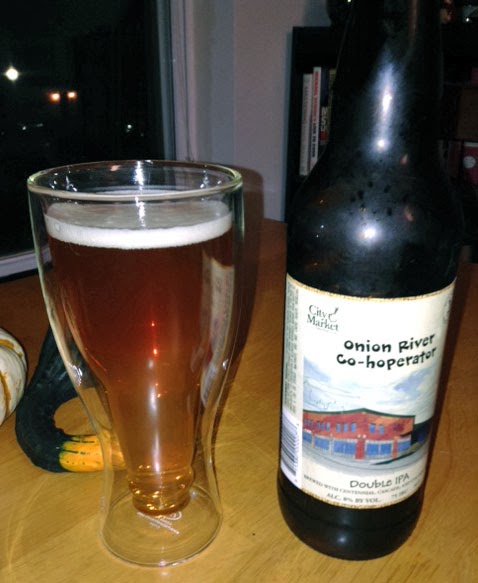 This was a special release to honor the 40th anniversary of the splendid City Market / Onion River Co-op in downtown Burlington; since it was so limited and I'm sure isn't even available now, it's probably not worth saying much about it.  But it was my first taste of a beer from Rock Art, and it was pretty good, so why not mention it here?

Plus I think it speaks to the incredible amount of really good beer being made up in these parts (Rock Art is based out of the small town of Morrisville, about 15 minutes from Stowe).  This was a fairly piney and earthy IPA, so it wasn't my favorite as I'm biased toward citrusy hop flavors, but I was impressed enough that I'd be interested in picking up more of what Rock Art has to offer next time I come across one of their offerings.

So yes, Vermont is some kind of incredible beer mecca, and I feel like this is just the start.  Hopefully I'll have the chance to rave more about it in the coming year, but this first trip left me fully satisfied on the beer front (and beyond).
Posted by Masticating Monkey at 1:21 PM