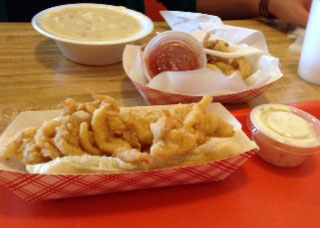 There are not only several Ted's locations around the Albany area, but several other places that serve the same regional take on the fish fry.  We chose the Ted's outpost in Latham for its proximity, but Bob and Ron's excites me because of their fabulous neon sign.  I'm a pretty low-key guy, but I really do love old, gaudy neon signs.

Something else I love?  Fried fish.  Preferably paired with a nice ale, but still good without.  So a visit to one of Albany's fish fries (frys?) was inevitable.  That said, we didn't really know what to expect that would make this fish fry unique; we've of course had fried fish all over the country, and for the most part it's pretty much the same--you're just thinking of the fish's size, how well it's drained, and the type of batter used.

Well, I don't need to tell any locals: the fish served out here certainly is different.  We found the long, skinny fried fish served in hot dog buns at Ted's to be strange and not exactly in line with our fried fish sandwich preferences.  And maybe Ted's isn't the best area representation of fish fry, but we got the idea.  I can see how the long, thin nature could work for some--you get a lot more of the fried breading in proportion to the white fish interior than with any other fried fish out there.  But I guess we found that's not what we like.  We were both left longing for the plump fried fish sandwiches you can find at pubs anywhere (they serve some great, cheap ones in Pittsburgh, where they pile on multiple pieces of fish that fall off the buns)--I guess it's just a preference for more of that flaky fish interior.

And while I certainly am not about to question people's long-standing devotion to area institutions, I have to admit I really do not get the chili sauce served optionally with the fish fries in Albany.  I'm usually a fan of tartar sauce on fried fish, but figured I'd try the chili sauce out of curiosity.  Never again!  First off, it was slathered on in such excessive quantity that it overtook the whole sandwich until I started shoveling it off.  And though I tried to keep an open mind, I was repulsed (K even more so) by the taste of this sauce; it seems like a combination of ketchup and sweet relish.  I've always had a serious dislike for relish, so I guess my reaction makes sense. 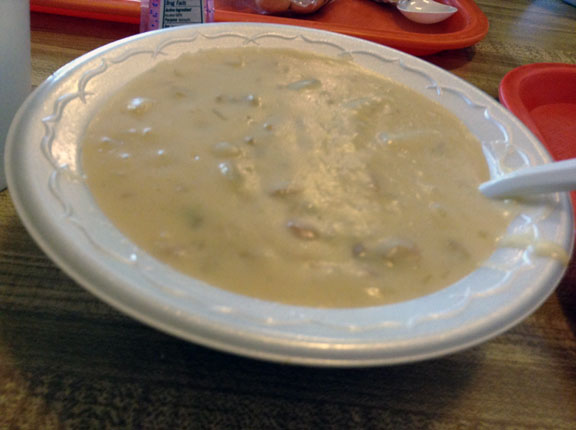 The clam chowder at Ted's wasn't bad--there were several nice chunks of clam present, and the consistency was pretty solid: not too thick, not too watery.  But with many other preferable ways to have a massive caloric blowout, I'm not sure we'll be going back to Ted's any time soon. 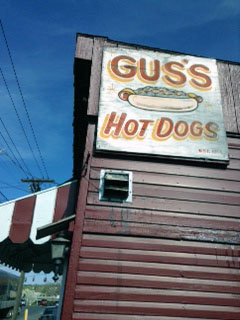 It's not every day you get an email that reads, "Do you want to get mini wieners after you get home?  I am drinking a smoothie now."  A green smoothie, I should add.  This kind of email--among many other reasons--is why I'm very pleased to be working on arrangements to finally tie the knot.

In the interest of full disclosure, I should add two points: 1) I had not been drinking a green smoothie that day, and 2) I was the one who had been pushing for a trip to Gus's for some time.  So it didn't exactly take arm-twisting to get me to head down the hill on Troy Schenectady Road to Gus's.

These mini hot dogs have been written about on both the local and national levels, so while I may not be breaking any ground in talking about how great they are, we certainly felt like we'd unearthed a little treasure in the heart of Watervliet.

Part of the genius of the mini hot dog, Troy/Watervliet style, is that these are locally-made wieners on custom-made mini buns from area bakeries.  That right there is basically the definition of local institution. 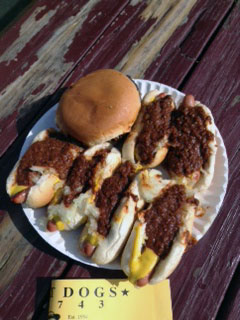 And I imagine these are made just like they used to be, nearly a century ago when it all started up with a Greek immigrant serving up mini hot dogs featuring a spiced meat sauce not entirely unlike an Ohio food institution--the Cincinnati-based chili sauce served at places like Skyline.  At places like Gus's, as opposed to Cincinnati style where it's more seasoned with cinnamon, you have a chili sauce that's most notably spiced with paprika.  It comes off as a little bitter (maybe, as Daniel B. has suggested, a result of the spices not being cooked), but ultimately works well, I think, when paired with the strong meatiness of the dog and the sour tang of yellow mustard.

The dog is full of snap and the kind of flavor you want in a full-fat hot dog.  These little dogs do go down quickly, but you can fill up on a load of them for a very reasonable 75 cents each.

I also decided to go crazy and get myself a Greek Burger--simply a hamburger with onions and meat sauce--for just $1.50.  This isn't some thin, lame little burger, despite the bargain price.  The beef patty must be around six ounces, and while I also added mustard to offset the bite and spice of the meat sauce on the burger, I found it to be quite a satisfying addition to our meal.

Gus's opened in 1954 and operates out of basically a tiny little shack in the middle of a residential neighborhood in Watervliet.  The ambiance might not be for all, but I think it fits perfectly as an example of long-standing, traditional local food.  There's no seating inside, just a handful of benches and tables next to the building.  And this absolutely feels like food you should be eating in that setting.

I don't know what it says about the Capital Region that these are the two major food institutions that have persisted over the course of the past century, but I'm glad they have hung around, no matter if I had some issues with the local fish fry.  Just like those old neon signs, I know not everyone loves them--but they do provide a unique glimpse into the past, and it's a shame when they're sent out to pasture.
Posted by Masticating Monkey at 1:56 AM