While I was up to my knees in papers (this seriously isn't much of an exaggeration) over the past month for a summer program I was teaching for at UAlbany, there was a campaign afoot that I nearly missed out on publicizing--the Kickstarter fund for Gatherer's Granola baked locally in Schenectady.

I learned about Gatherer's earlier this summer when they found my little blog and asked if I'd be willing to review their three granolas.  An offer for free granola?  That was an easy answer.  I'm a sucker for granola, though usually it comes from Trader Joe's or Target (on their Archer Farms label).  Or, if I'm especially lucky, homemade and neatly packaged as a Christmas gift from K.

I'll admit I like all those mentioned above, and K's still reigns as my favorite, but Gatherer's three different varieties--Chipmunk's Choice, Squirrel Bait, and Fox's Fancy--are creative and tasty, all while featuring high-quality ingredients.  And that's something I'd be willing to say even if Gatherer's hadn't sent me those three bags. 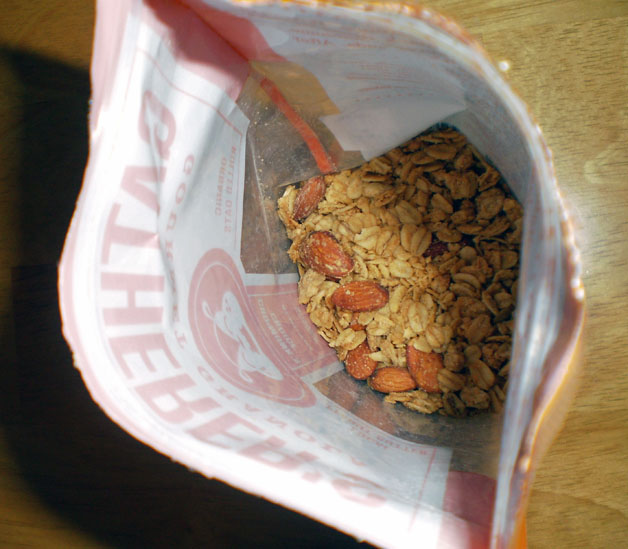 Besides being a sucker for granola, I'm also an unabashed lover of peanut butter, so at first glance, this was the granola that stood out to me most among the three.  And it didn't disappoint.

The peanut butter flavor is predominant, and it blends well with the almonds that are scattered liberally throughout the bag.  You know, Gatherer's Granola isn't exactly cheap--I've seen it in ShopRite and Hannaford for around $5 for a 12 oz. bag--which is the main reason why I'd be reluctant to try it for the first time.  But the almonds serve as a good example of why this shouldn't feel like too high a cost for granola.

Gatherer's doesn't skimp when it comes to ingredients that cost them more, like almonds.  And the other ingredients are all top-notch--organic, like the rolled oats, shredded coconut, and sugar; and local, like the peanut butter and maple syrup.

But none of that matters if it doesn't also taste really good.  Like I said before, the Chipmunk's Choice succeeds on that level.  The peanut butter and almonds mesh together well, and the sweetness provided by the sugar and maple syrup makes it so the granola could work well as a treat.  That's not to say it doesn't work well for breakfast, too; put it in some milk or yogurt, and you're set. 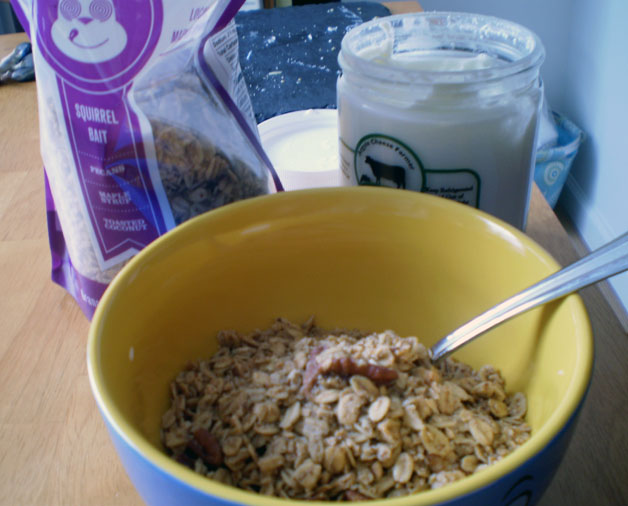 As good as the Chipmunk's Choice was, I think my favorite of Gatherer's granolas might be Squirrel Bait.  Loaded with pecans and shredded coconut, those flavors are brought together very well by the maple syrup.

I had the Squirrel Bait with the a whole milk yogurt.  The slight sourness of plain yogurt was a perfect match for the sweet, oaty flavor of the granola, while the crispy, crunchy texture of the granola--highlighted by the shredded coconut pieces and pecans--held up really well in both yogurt and milk.

But start picking the pieces of this granola out of the bag on its own and you're not going to be disappointed.  The flavors hold up; just make sure you get a nice little strip of coconut to go along with your cluster of oats.

I tried this granola last out of the bunch, but in the heart of fall this might be the granola I reach for first. 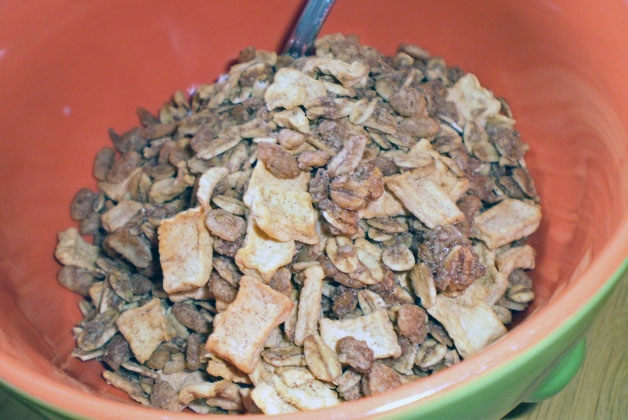 You've got a considerable serving of dried apple pieces, along with seasoning from allspice and cinnamon--these are the flavors of autumn, and Gatherer's isn't shy about showing that boldly. Sometimes I don't love the texture of dried apples--they can be pretty chewy--but that's a personal issue, and only relevant here because Gatherer's is so generous with those apple pieces.

Taste-wise, the amount of apple pieces is a boon; I don't know if it's a matter of freshness, but the apple flavor is strong and real, just like what you'd get if you dehydrate some apple slices at home.  With the other spices involved, it all comes together really harmoniously, only enhanced by the sweetness that comes from both maple syrup and local wildflower honey.

So, just a couple days remain in Gatherer's Kickstarter campaign.  The good news?  They've already met their goal of $15,000.  But as a small local business using quality ingredients, they could still use some support, because yes, this granola is good.

So whether or not you help the company by donating, I recommend checking out their product.  Quality ingredients, inventive styles--the folks at Gatherer's definitely know what they're doing, and here's to their business flourishing and growing in the coming years.
Posted by Masticating Monkey at 4:02 PM