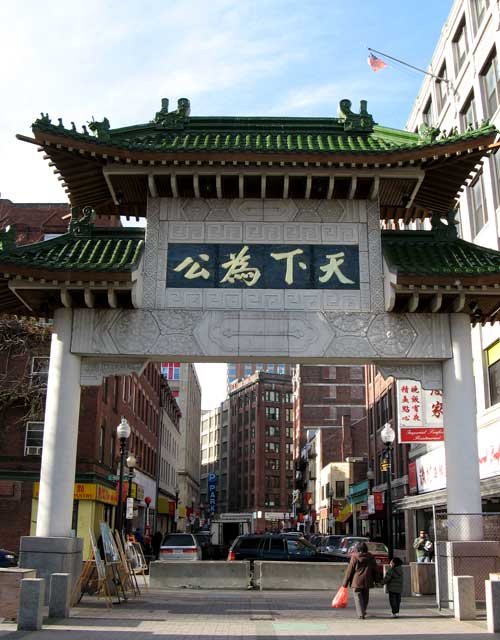 It's been impossible not to have the city of Boston and its people on the mind the past couple weeks.  I don't need to rehash everything that went down there, and I wasn't more personally affected by the bombings than the average person.

But just a month before the attacks, K and I were in Boston, walking along Boylston between our hotel and the Hynes Convention Center where the AWP Conference was being held.  I remember walking past the library, the Marathon Sports store, in front of which these bombings occurred, and still get such an awful feeling about what happened there--how such an innocent spot could be so suddenly transformed into a war zone.  It's unreal to think about, and I can't imagine what residents of Boston, or Watertown, or anyone more directly connected to the attacks, must feel after it all.

My memories of Boston are, as usual, fond--it's a city I've loved every time I've visited over the years.  The conference?  That drives me crazy, being surrounded by more than 10,000 writers and academics and wanna-bes and nutcases (though admittedly I probably fall into more than one of those categories).  It was nice, though, so see a few people from the writing community that we know, attend a fine reading and talk with Richard Russo and Amy Bloom, and in general just enjoy the city and its food.

Yes, the food.  We ate lots of it, skipping out on much of the conference to enjoy ourselves, and my goal is to recap this part of the trip, because it was pretty memorable.  Enough to cover two blog posts.  Here, then, is part one, in which I detail our adventures around Boston's Chinatown neighborhood.

We took the Amtrak from Albany to Boston, which was a great idea for a conference in the city where we wouldn't need our own car--inexpensive and affordable.  The trip was about an hour shorter than advertised, and we were in our hotel by around 9 p.m.  Staying within a 5-10 minute walk to Chinatown had several benefits, we realized; not only the variety of restaurants nearby, but the kind of late-night weekday dining options you can find in a city with a vibrant nightlife.  Kaze Shabu Shabu is one of a few hot pot style restaurants in Chinatown; having never eaten at this style of restaurant before, I was eager to try it and enthused by the positive reviews.

The real fun at this type of restaurant is that your table also serves as a stove of sorts; the server cranks up the heat and puts a wide, divided pot of broth on the burner in the middle of the table.  There are several broths to choose from; though tempted by some of the more exotic soup bases, K and I both went with the standard meat bouillon.  We were able to doctor up our meals with a variety of sauces, and as we cooked our proteins in the broth it became more and more flavorful. 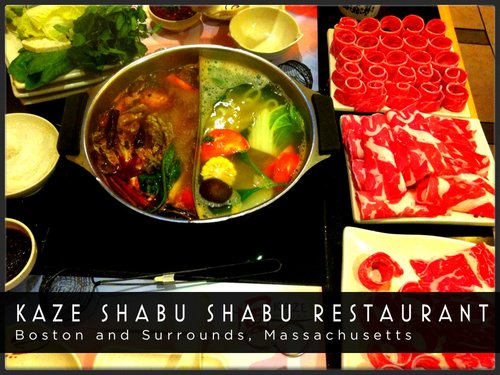 K went with one of the Surf & Turf combos for her proteins, a plentiful combination of shrimp, scallop, and other seafood options along with slices of beef ($18.95).  I wanted just the turf, going with a meat combo featuring beef and lamb slices ($13.95).  Both of our selections also came with a wide variety of greens--cabbage, spinach, bean sprouts, and more--and a selection of noodles.  K went with udon, while I wanted to try something a little different and chose the Japanese potato noodles.

The dining experience is quite the process: while the meats are delivered sliced up, nothing is cooked.  You wait for the soup base to boil, and then cook each item as long as it needs.  The thin slices of beef and lamb are ready in a matter of seconds, while some of the vegetables need minutes.  The interactive nature of this meal, though, doesn't feel like work--you lose yourself quickly in the process of cooking everything just how you want it (trying not to overcook the thin slices of meat) and combining different elements in different ways.

Beyond that, it was also a deeply satisfying meal for the taste and the value.  With the tasty broth and varieties of sauces, everything had great flavor.  The meats were tender and plentiful, the noodles wonderfully chewy when cooked right.  We were both stuffed before finishing, even after a long day of travel--this was a nearly perfect meal for a cold, windy night.  With the long winters in Boston, it's no surprise that they do good business. 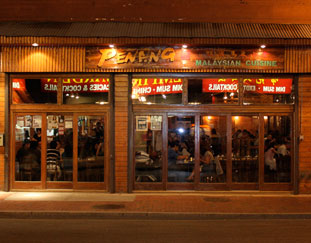 I've written about my love for Malaysian food before, so it was a given that we were going to head a couple blocks from our hotel to Boston's version of Penang.  We've eaten at a handful of restaurants with that name, from Chapel Hill, NC, to Philadelphia to East Hanover, NJ.  Some are affiliated, some are not, and the quality varies from location to location.

With the weather starting to turn unruly, we were kindly visited for lunch by K's old friend, H, who drove into the city from the suburbs to join us.  We went with some of our standard fall-backs for Malaysian restaurants--the Roti Canai appetizer, entrees of Beef Rendang and Pad Thai--and supplemented those with a couple other dishes: Roti Telur, a different type of pancakey appetizer, and an entree of Ginger Chicken for a taste of the Chinese side of Malaysian cuisine.

Despite the promise of a tasty lunch, we ended up not exactly thrilled with our meal (and it was no match for the Penang in East Hanover, which we visited last summer).  Sure, it was a nice time catching up with an old friend while watching the snow start flying sideways, but the pad thai was pretty bland, lacking in the typically pleasant char you can only get at a restaurant where the dish has been cooked thousands of times in a blackened wok; this tasted like an at-home version.  The beef rendang was overpriced for lunch at $18.95--the portion was fairly small and the beef was somewhat dry and chewy.  And it didn't feel right to be charged two dollars for coconut rice when regular rice wasn't included with our meals.

I'm not going to say the meal was bad, because our appetizers were good and the entrees used many spices we love, but it was a let-down compared to other Malaysian meals we've had.  Penang is a fine place to satisfy a craving, but not so good compared to many other Malaysian restaurants we've visited over the years. 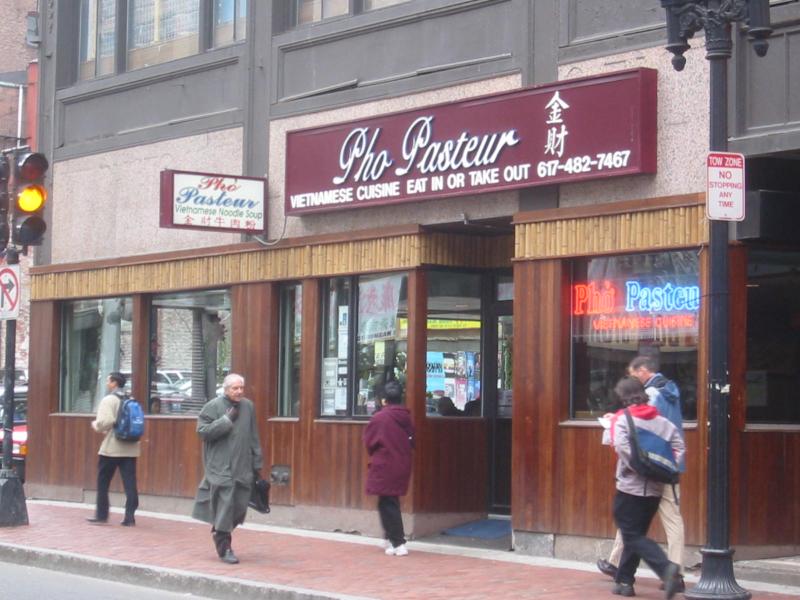 On our final night staying adjacent to Chinatown, the weather had improved and we were able to more comfortably walk between the convention center and our hotel.  So in between conference panels and the Russo/Bloom reading, we stopped in for a meal that would keep us warm--Vietnamese, and specifically pho.

Pho Pasteur was one of a few options for Vietnamese in the area, the first we walked past and a popular choice among locals.  We never ended up getting pho anywhere in the Albany area this winter, for a number of reasons, so you might say we were jonesing for a bowl of it in Boston.

I don't normally get into service at restaurants because typically restaurant staff do a fine job, or are at least trying, but Pho Pasteur was kind of a mess.  Yes, it was pretty busy on a Friday night, but after we were seated in this very open, yet maze-like restaurant, we had the hardest time getting the attention of anyone working there.  Getting our waters took a long time, and I think K had to remind at least three different people that she'd ordered Chanh Muoi to drink.  That's a drink described as "salty iced lemonade," but in reality it features a glassful of the preserved lemons that she loves.  A bit strange, but she enjoyed it a lot.  And come to think of it, that might be something fun to try to make this summer.

I would say that this meal was otherwise fairly unremarkable, which isn't a bad thing.  The fresh spring rolls (with pork and shrimp) we got as an appetizer hit the spot, as these things do more often than not (though the pre-packaged ones at Trader Joe's are an exception--not good).  And our bowls of pho were good in the way you expect from a place that makes as much of it in a day as Pho Pasteur must.

For some reason I decided to go in a different direction than usual with my pho and ordered the Bo Vien--which means meatballs.  The broth had all the flavors you'd hope for, the meatiness, the flavors of star anise and cloves, and the meatballs brought an interesting surprise to this party.  They're different than Italian meatballs--more rubbery, I'd say.  That's not a bad thing; slicing these up to eat with the broth and other elements of the pho, the texture was kind of necessary so they didn't fall apart in the soup.  I'm sure there are a few different ways of making these meatballs, but they taste mostly of beef and fish sauce.  I don't think they'll be my top choice on my next trip to get pho somewhere, but ultimately I found them unique and tasty enough, and a good conduit for some Sriracha.

We were really fortunate to stay in a hotel as nice as The Revere--a great deal on Hotwire and a terrific location, so close to so many interesting dining options, especially since the weather the first couple days made walking far quite an undesirable proposition.  Not everything we had was amazing, but it was great just being able to walk a short distance to such a variety of restaurants.
Posted by Masticating Monkey at 10:53 AM