While it was fun exploring the many corners of Chinatown during our recent trip to Boston, circumstance dictated that we move out of that comfort zone for a few other meals during our trip.  That's not a bad thing, even if it meant not getting one of my beloved Chinese roast ducks.  And though I haven't seen them hanging in windows, at least I know I can get roast duck here in Albany.

After three nights in Back Bay, we relocated for the weekend to Le Meridien in Cambridge.  This hotel was smaller, not as nice as the Revere, but conveniently located just off of Massachusetts Ave. near MIT.  One regret we have is that we didn't make it to Baraka Cafe in Cambridge; we'd walked from the T station north of Harvard all the way down Mass Ave. on Saturday and had to stop for sustenance before we got as far as Baraka Cafe.  That meant not having room for some good Moroccan food.  Next time, eh?

But when you try as much good food as we did over the course of the week, you can't really complain.  Here are the rest of the details of our eating adventures in Boston: 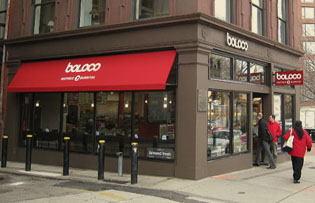 Our first full day in the city, after lunch at Penang, we decided to brave the weather and pay a Thursday evening visit to the wonderful Boston Museum of Fine Arts, which has a varied, extensive collection of art from so many regions and periods.  This was a great experience, but by the time we exited the T near our hotel, it was late evening and we were pretty exhausted from the long day.

Neither of us wanted to walk much more, nor were there many interesting restaurants west of our hotel near that T stop.  But there was a little joint called Boloco on the way back--the name comes from "Boston Local Company"--that we'd heard made some interesting burritos, so we decided to go for convenience in this case.

K and I are both fans of Chipotle, love the way they make their limited menu of burritos and salads work by using good flavors and ingredients, so the hope was that Boloco would function in a similar way.  The Boston Common location we visited featured modern design, with tall windows and lots of open space, so it was reminiscent of Chipotle on that front. 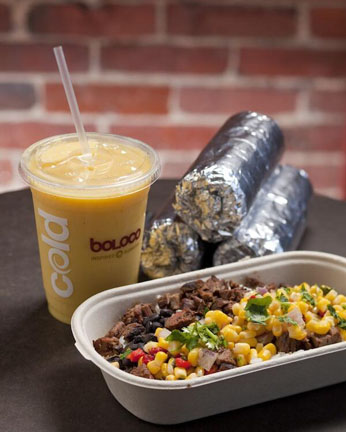 The menu isn't as limited as Chipotle's, but I certainly wouldn't call it extensive--there are basically eight varieties of burritos or bowls to choose from, ranging from Tikka Masala to Memphis BBQ.  For those who complain about Chipotle's lack of "Mexican authenticity" or whatever, don't even think about Boloco.  There is a Classic Mexican burrito option, but clearly the mindset here is to try some different things inside that tortilla wrapper.

And from our experience, they do those things pretty well.  I was in the mood for the Buffalo Chicken burrito ($5.89) which--do I even need to describe this?--featured classic Buffalo sauce on the chicken, along with blue cheese dressing, celery, and rice.  I'll admit that I'm usually a traditionalist when it comes to things like burgers and burritos, so this was a little weird for me, but ultimately I liked the way these flavors and textures all came together.  I think K would fall in the same line--she got the Bangkok Thai burrito, which combined Thai-style peanut sauce and what Boloco calls an "Asian slaw" with small slices of cucumbers and brown rice.  The flavors were spot on as to what you'd expect in any Thai restaurant.

The other interesting element of Boloco's menu is their shakes and smoothies.  Despite the weather, I was strongly tempted by the Nutella Milkshake, but ultimately decided I'd be better off exercising the slightest bit of restraint here.  But it does sound good.  (Anything with Nutella sounds good, though.)

Boloco is a local chain that tries some different things and, according to their posted philosophy, seems to do those things the "right" way.  This kind of burrito isn't for everyone, but I certainly wouldn't complain if they wanted to expand to the Albany area. 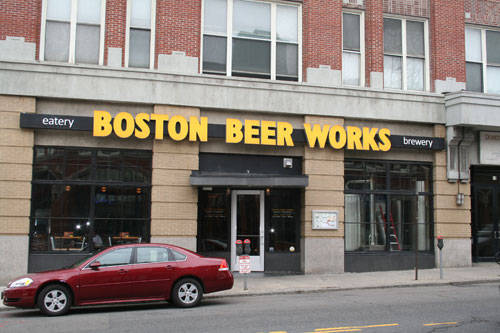 We met up once again on Saturday with K's longtime friend, H, and this time were joined by her husband, M, and their almost three-year-old daughter, L.  They generously treated us to lunch at Boston Beer Works, suggesting the Fenway location, knowing to avoid the hordes of fans at the Canal Street location, as the Bruins were playing the Flyers a short walk away at TD Garden.

I'm always excited to try a place that brews its own beer, and Boston Beer Works turned out to be a good one on several fronts.  The location is great--Fenway Park just a block away and H and M knew where to find parking--and this is a sports bar/restaurant that's family friendly and puts in more effort with the food than many similar establishments.

Having recently been disappointed by a rather lame and overpriced attempt at nachos in Albany, we got those to share at Boston Beer Works and were much more satisfied.  A full order cost $9, plus $3 more for grilled chicken, and was appropriately loaded with an enjoyable blend of cheeses, jalapenos, olives, tomatoes, and scallions, and they didn't skimp on the chicken.  Much better than those other nachos, which were covered in soggy lettuce and bits of chicken.  The fried pickle spears ($7) were nicely done, well-drained and crunchy.

In honor of the Bruins--or maybe just because it sounded good--I went with the Black and Gold Pastrami Sandwich ($13), which featured a heaping amount of pastrami on rye.  And it wasn't just any pastrami; this was black pastrami simmered in the Beer Works' own Golden Ale.  This was a wonderfully flavorful sandwich, even compared to the average reuben, and the fries were uniformly crisp.

K went with the Chicken Apple Sausage ($14), which featured a very healthy serving of these sausages, which I tasted and liked for the hint of cinnamon that was added, and a smoked ham and sweet corn hash.  The menu was very extensive, including several monthly specials, both of which featured many items that were at least moderately inventive or interesting, something you just don't see enough of in this type of restaurant.

Oh, and there was beer!  I decided to start with their Back Bay IPA, a moderately light IPA at 6.5% ABV.  Featuring a nice balance of bitterness and maltiness, there was first the hint of grapefruit sweetness, followed by a nice level of bread flavor, and then the finishing bitter notes.  I could have easily had a second of these but instead wanted to try their seasonal Irish Cream Stout.  A low-alcohol beer at 4% ABV, this was a satisfyingly creamy and malty stout that had a just-right amount of sweetness for this type of beer. 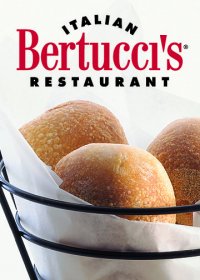 You might think that after a lunch like the one at Boston Beer Works, we might not need to eat the rest of the day.  But we did walk a lot, strolling down Mass Ave., doing a little looking, a little shopping, and simply enjoying the first nice day of our visit to Boston.  When K spotted this narrow outpost of one of her favorite chain restaurants from her days in Philly, Bertucci's, it was decided that we should stop in since we had a ways left to walk back to the hotel.

I've only experienced Bertucci's a couple times over the years, and though I'm usually anti-chain, especially when more interesting options are around, I can't sit here and say it wasn't a good little meal we had there in Harvard Square.  It was a small restaurant, but we were seated immediately, just behind the drink station, where I noticed they had Harpoon IPA on tap.  Pretty good for a chain, and maybe I did have a pint (just to compared to the Back Bay IPA from earlier in the day, of course).

The beer certainly went well with the rolls at Bertucci's, plump and fluffy orbs that of course serve to fill you up too quickly but are quite good.  The Tuscan Roasted Vegetables ($4.99), cooked in Bertucci's brick oven, included blackened slices of eggplant, zucchini, artichokes, and peppers.  Not bad.  And I thought the classic brick oven pizza from Bertucci's was quite good; I had the Spicy Salami ($10.99), which featured genoa salami, mildly spicy cherry pepper slices, and provolone on top of the traditional tomato sauce and mozzarella and romano cheese combo.  The crust was thin, just crisp enough, and picked up some flavor from being cooked at a high temperature in that brick oven. 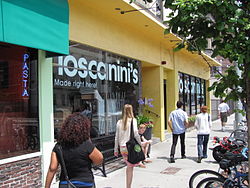 After retreating to our hotel for some rest and recuperation after our busy, well-fed day, we remembered a little ice cream joint we'd spotted earlier, just a block or two away from Le Meridian, called Toscanini's.  After a quick Google search of the place I was sucked in.  I've always loved ice cream, but got spoiled during my three years in Ohio--nothing I've had since then comes close to matching up to my beloved Jeni's Ice Cream.

But Toscanini's has a serious reputation, I discovered--not just around Boston, but nationally.  They were open late, it was the last night of our stay in Boston, so why not cap it off this way?

Ultimately, Toscanini's doesn't match up to Jeni's.  It's good, but not that good.  Even nearing 11 p.m. the store was packed, so we were lucky our hotel was so close by--this was not "eat ice cream outside" weather, certainly.

Toscanini's has a long list of rotating flavors, some standards, some seasonal, and they gladly offer up samples.  I wish I could have sampled all these flavors--who knows what I missed; life is full of regrets!--but ending up going with the very popular B3 (brown sugar, brown butter, brownies) and khulfee, an Indian flavor combo of cardamom, almonds, and pistachios. 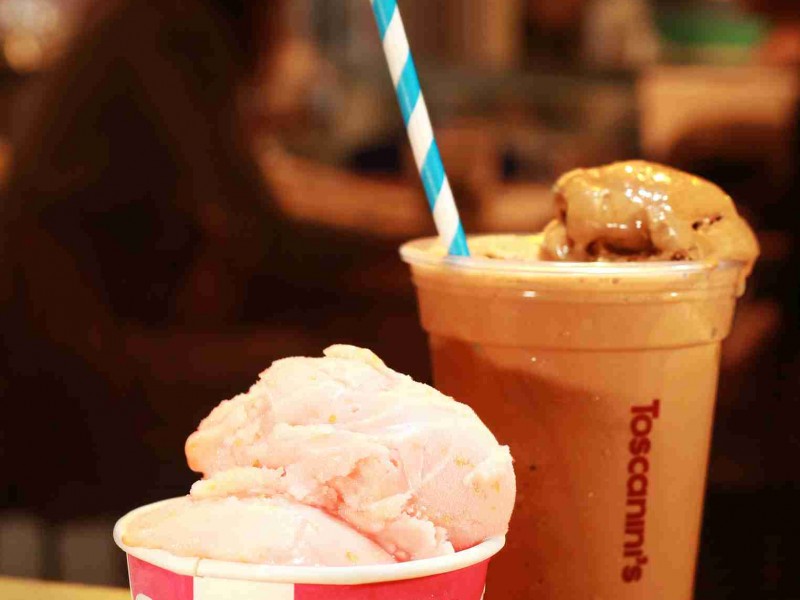 The ice cream was a good texture, creamy and very thick.  I didn't need a sample to know I'd like the B3.  The flavors came together in a pretty interesting way, but I thought this was--I don't know how I can even say this--almost too rich.  And while I was initially drawn in by the cardamom flavor of the khulfee, after eating a few bites of it I decided it was too powerful a flavor, just dominating and kind of one-note.  I can't help but compare this to one of my favorite flavors from Jeni's, their lime cardamom, which works brilliantly because the cardamom is in competition with an equally strong lime flavor and they balance each other out.

My criticisms aren't to say that Toscanini's isn't good--it is, and I would love having this place in Albany.  But it isn't the best.  I would certainly be happy to return next time I'm nearby in Cambridge, though, and sample up some of their other inventive flavors.

In all, we spent just three full days in Boston, but packed a lot into that time.  Maybe too much!  But it was good times, as it always seems to be in this city, and as usual I'm left looking forward to my next trip into Boston.
Posted by Masticating Monkey at 12:44 PM