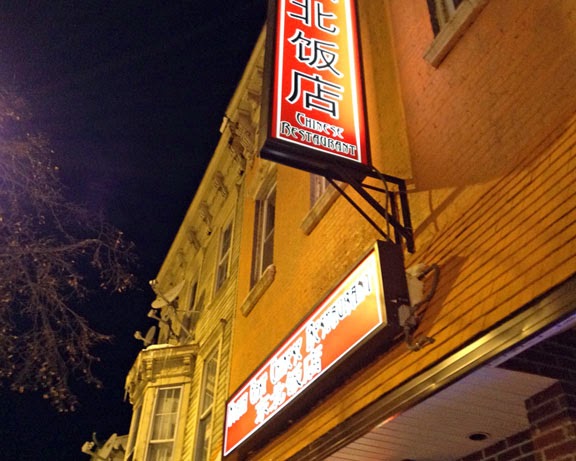 My latest Eat This article for All Over Albany covers the Spiced Potato with Hot Pepper and Special Pancakes at Northeast Dumplings House. That was a surprising, delicious dish--different than anything I'd previously encountered, and something I'm looking forward to having again.

But it wasn't just those potatoes K and I enjoyed when we visited Northeast Dumplings House. Everything we had was good, and that's not something that can be said for most places we visit, let alone restaurants that just opened two months ago. And this is the kind of little restaurant that seems like a real coup for Albany; to find a restaurant dealing in the cuisine of such an unrepresented area as northeastern China, I figured I'd have to make a trip to Chinatown or Flushing--not Central Avenue.

So with that in mind--and because Northeast Dumplings House is an unknown to most at this time--I figured I'd give an even deeper look into the food served at the restaurant. 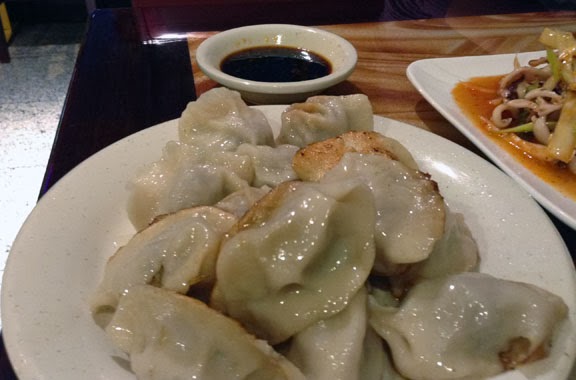 You go to a dumpling house, of course you have to try the dumplings. It was quite exciting to hear that the chefs are making the dumplings here in house, and it's fun having a view of them at work, as there's a pretty large window in the rear of the restaurant that looks into the kitchen.

None of this would mean much, though, if the dumplings weren't actually good, and they were. We went with the fried version of the pickled cabbage and pork dumplings, an order of 15 for $8.99 (it's a dollar less if you want them boiled).

With dumplings made fresh at a restaurant, you never know what you're going to get, particularly with the skins. Sometimes they'll end up too thick and chewy, creating an unpleasant texture and an imbalance between dough and filling. At Northeast Dumpling House, I thought the skins were nicely done. They were maybe a bit on the oily side, but browned quite nicely.

In terms of the filling, I thought the pork on its own was good, but when the sourness of the pickled cabbage came through, it was even better. The only issue here was that some dumplings didn't really have much cabbage, and the filling wasn't always in a tight enough ball, so it sometimes fell apart as we ate.

Also, while K and I had no problem finishing off this order of dumplings, I'd prefer an option for fewer dumplings. 15 is kind of a lot of one kind of dumpling, unless you're sharing with at least two others. Then again, I like variety--the reason I have trouble buying an actual six-pack of beer instead of doing a mixed six--so maybe this is just my issue. 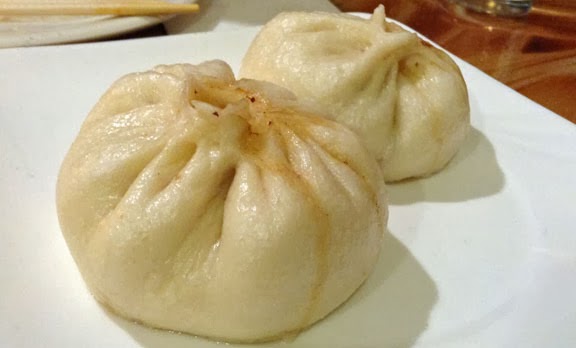 The fluffy, thicker skin of these buns is almost bread-like. At $2.99 for two, a pair of lamb buns is a good deal, particularly because they're quite good.

Lamb is a specialty in only certain regions of China, so you don't encounter it at every Chinese restaurant you visit. I love this meat, though, and the fact that it's featured in a few ways on the menu at Northeast Dumplings House is one of the reasons it's exciting to have this restaurant now open.

There's enough of the filling that you can get a taste of it every time you bite into the bun. Sometimes the filling can get kind of lost in a bun if it's too small for the size of the bun. I also enjoyed the taste here; I'm a fan of that slight gaminess of lamb, and of course its fattiness in this form is good. Bits of scallion and garlic were mixed in, too, adding some depth of flavor here. 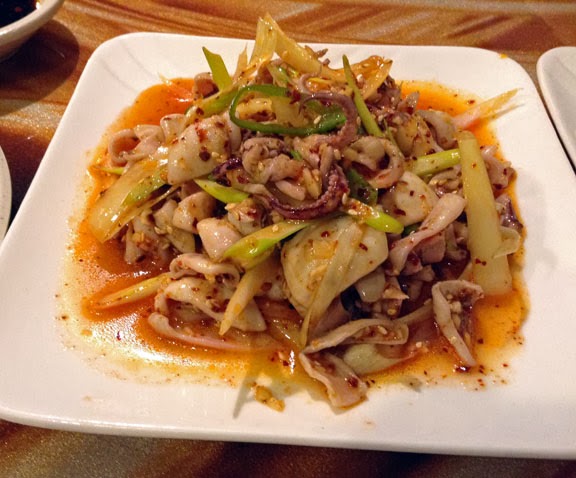 This dish really worked for me, as it had pretty intense levels of heat and garlic flavor. If you're like me and really love both of those, then this is a dish for you. There were bits of hot pepper throughout (and, I'm guessing, some chili oil used in the sauce) and significant chunks of garlic mixed in. This is the level of garlic that will linger on your breath; consider yourself warned, but don't let it deter you from getting this dish.

At $6.99, this felt like a very reasonable deal for a fairly significant pile of squid. And it was all parts of the squid, not just the questionable circles you sometimes are served exclusively, as explained on this episode of This American Life. 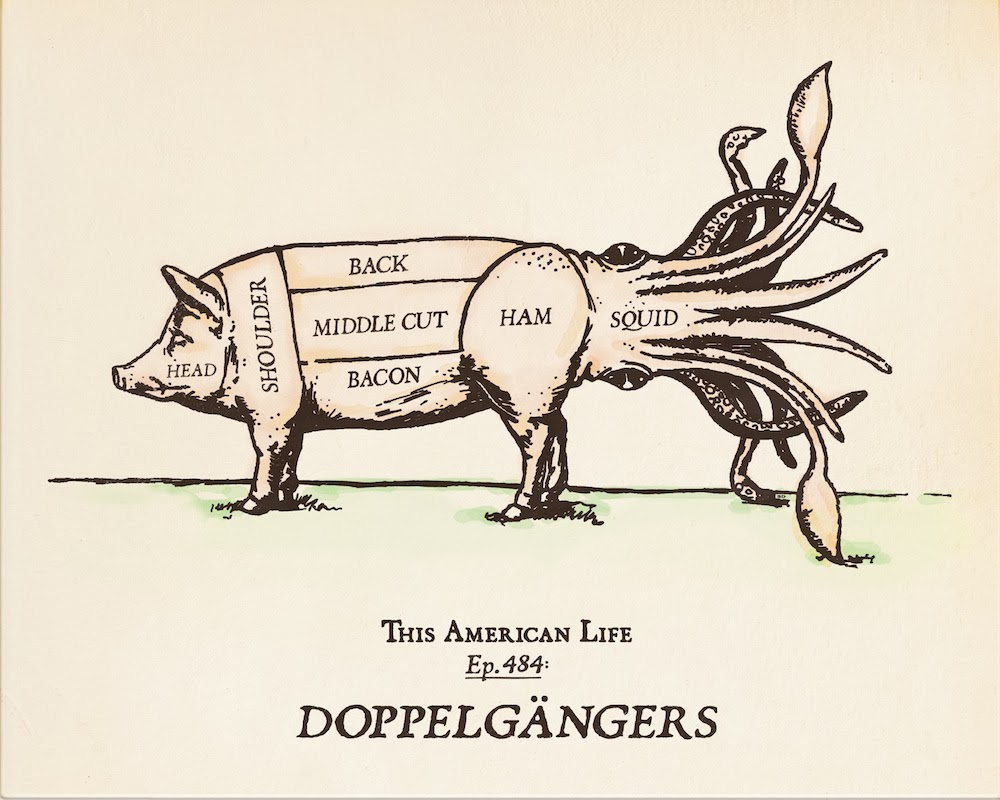 The squid here was cooked just right--texturally, it was just chewy enough. Satisfying on that front, too. And just like the Spiced Potato with Hot Pepper, there was a strong level of sourness from vinegar. All these strong elements really worked to create some deep, interesting flavor.

In all, this was a really great experience we had for our first visit to Northeast Dumplings House. There was food we knew (the dumplings and buns) that hit those familiar spots for us, while the new dishes (the potatoes and this unique take on squid) surprised and excited us.

It's hard for a new, under-the-radar little restaurant to make a mark, especially when surrounded by a lot of popular restaurants on Central Avenue, and when competing with quality Chinese establishments around town, like my beloved Ala Shanghai and newer spots that hit some strong notes in Taiwan Noodle and Hong Kong Bakery. But Northeast Dumplings House deserves a spot in even the critical diner's rotation, and I can only hope that in talking about a few of their tasty dishes I can influence more people to start checking out this new little gem.

Northeast Dumplings House is located at 299 Central Ave. in Albany
Posted by Masticating Monkey at 11:47 AM