A long post about two days of eating in and around Burlington, Vermont 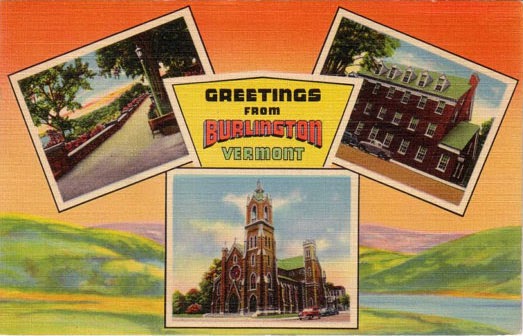 I've lived here in the Albany area for more than a year now, so I was getting more and more eager to get up to Vermont.  Fortunately, K and I got the opportunity this fall and spent a couple days near Burlington.  It was, of course, the perfect time of year, the fall foliage in full color, the temperatures just right.

I've always subscribed to the belief that Vermont is some kind of uniquely beautiful and special place, and my only fear was having that notion shaken.  Now, it's not like I got the experience of living there, but in our few days around the state (we also headed down to Brattleboro for a literary festival), I found a place that possessed all the physical beauty I could have hoped for, a place where good food and good beer was the norm, and where the arts and creativity seem to be both thriving and embraced, both in the small and large towns of the state.

While I could go on and on about all of that, here I'll focus on the food and beer, especially around the Burlington area.  It was pretty crowded with all the tourists out to look at leaves and some UVM alumni event, but that didn't do much to diminish the experience.  I only wish we had more time to explore: to try out more restaurants, to drink more beer, to hike a little, to take a ferry across Lake Champlain.  But hey, we're close enough--another visit wouldn't be too hard.

Here are some food highlights from this first visit--with a recap of my beer adventures to come soon.

I had my eye on this place well before our trip; it sounded like something right up not just my alley (because of the superb beer list), but K's, too, because they actually have a pretty interesting menu.  But even with interesting menus, the execution isn't always there.  At The Farmhouse, everything came together quite nicely.

We arrived around peak dinnertime and thus had to wait a bit for a table, but the wait was well worth it.  Yes, the beer was great (I had my first taste of Hill Farmstead--but more on that another day), but there were also a number of dishes calling to us, so we went a little wild.

We started with the Marrow Toast, which featured marrow blended with butter already spread on pieces of Red Hen grilled bread.  There was a decadent richness from the butter and the marrow; it was meaty and salty, an excellent combination.  On top of that, we had the pork rillettes, which is similar to pate, but sort of chunkier, with pieces of pork that are less blended than in a pate.  It was a fun item to find on a menu at a restaurant like this, tasty and definitely worth trying. 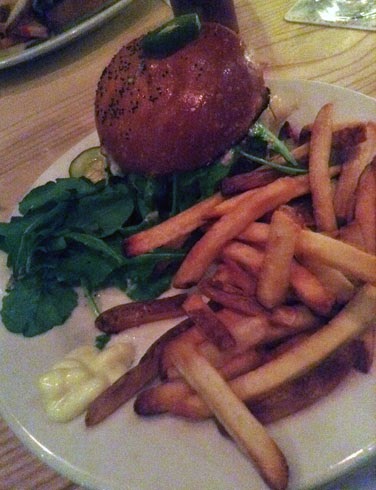 It would have been fine to stop right there, but we each ordered a burger and fries--mine off the specials menu, while K had the veggie burger.  These featured local ingredients, including cheese, beef, bacon, and buns--and, most importantly, they were both really good. This was one of the best burgers I can remember having in some time.  Juicy, cooked perfectly, with cheese that stood up to good beef taste, and a bun that held up despite all that juiciness.  And the fries were crispy, likely twice-fried, and served with aioli--an excellent accompaniment to both the burgers and the beer.

Even with a full house, The Farmhouse featured good service and a lively buzz, but never seemed too loud or hectic.  After a fairly long drive up to Burlington earlier, it was a wonderful place to unwind and indulge. 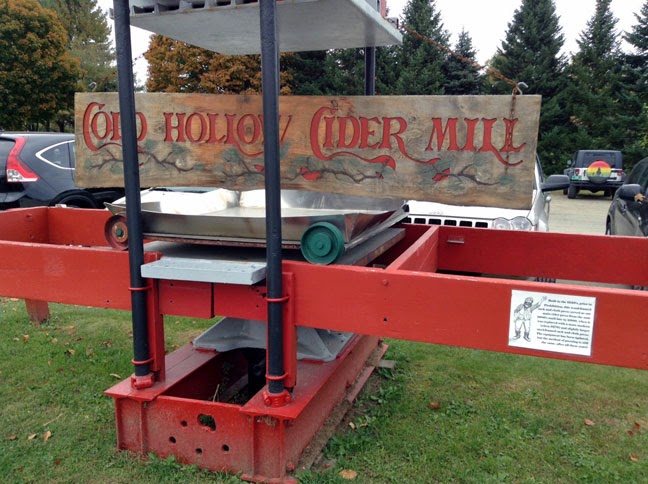 We came for the cider donuts, got a taste of one hot off the belt, and ended up leaving with a few locally-made handmade gifts we gave for Christmas to some family members.  This place is a wildly popular tourist stop, and while I've had better apple cider donuts--these were a little bland and could have been crisper--I didn't really mind Cold Hollow and won't call it a typical tourist trap because they do sell a lot of locally-made products, and there is a good little self-guided tour of the cider press. 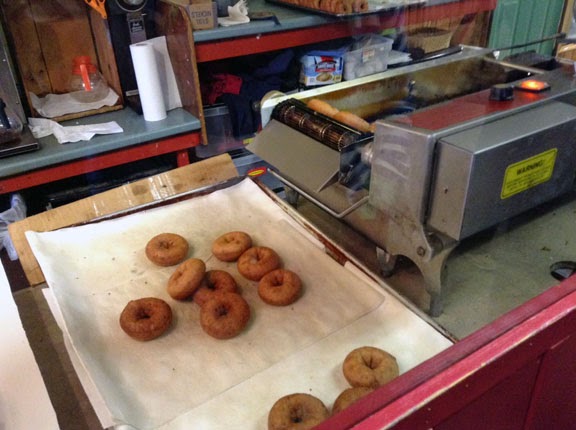 I liked my sample of apple cider, too, right off the press.  I'm no connoisseur, but it tasted good and--judging from the tour--you could see just how it was being made, right there with real apples.

We were staying right up the hill from the Ben and Jerry's Waterbury plant, so even though K had been on the tour when she was a kid, we had to do it again.  At $4 a person, why not?  The wait for the tour was short, just long enough for a quick jaunt around the flavor graveyard, and the ice cream sample at the end of the tour quite generously-sized.

Plus it was just down the street from the Alchemist Brewery, where I was able to get a couple four-packs of Heady Topper.  So it was all definitely worth the trip. 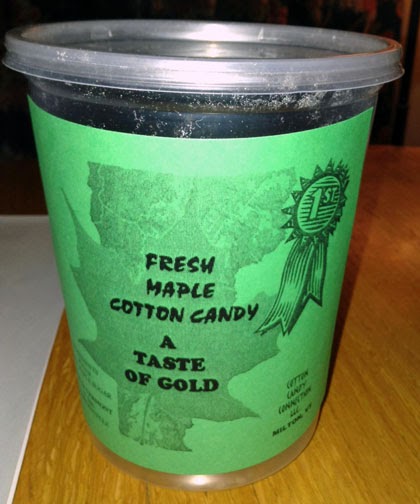 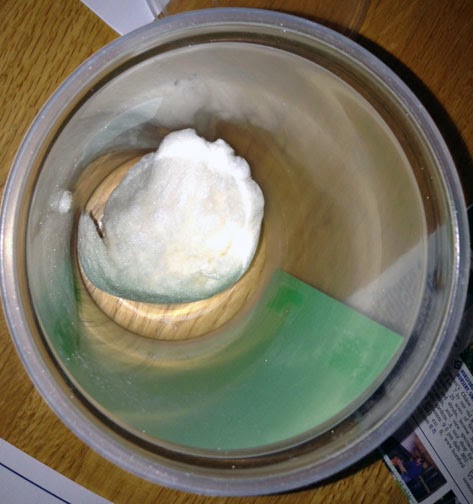 I'd always thought cotton candy was kind of gross, for lack of a better word.  I mean, just the way people eat it, pulling off sticky strands with their fingers.  Maybe those are just my issues.

Anyway, we found this maple cotton candy being sold at a store featuring Vermont-made goods in downtown Burlington, so K picked up a container of it.  She was really enjoying it; meanwhile, I was looking for my own sweet treat--scroll down for that--so I abstained for a while, I think until we got back to our hotel that night.

And you know what?  This cotton candy is really good.  The maple flavor is certainly present, and I don't know, maybe it was the ability to eat it in the confines of my own room with cleanly-washed hands, but I got into it.  This was some real melt-in-your-mouth goodness.  Too bad there wasn't much left by the time I got to it, but that's my own fault.  K gives it the highest recommendation. 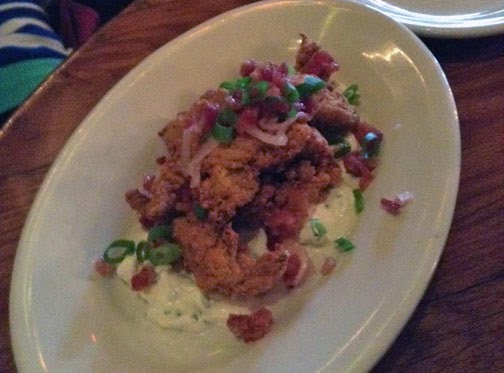 Back in Burlington, wandering around downtown in the late afternoon, we decided to pick a place to eat without vetting in online beforehand.  I was a little nervous about missing something great, since I knew there were lots of good options in the area, but it turned out to be no issue at all; we stumbled upon Duino Duende--whose sign read "Street Food Internationale"--just a block or two off the main drag in Burlington, and ended up very satisfied with our meal.

Attached to the popular Radio Bean bar, Duino Duende features a funky and attractive interior.  K and I were kind of cozy at a small table; it was somewhat dark inside with eclectic decorations.  And coming from Albany, where even the newest and nicest spaces almost always follow a certain aesthetic pattern, I'm okay with a little funkiness--especially when there's good food and beer to go with it. 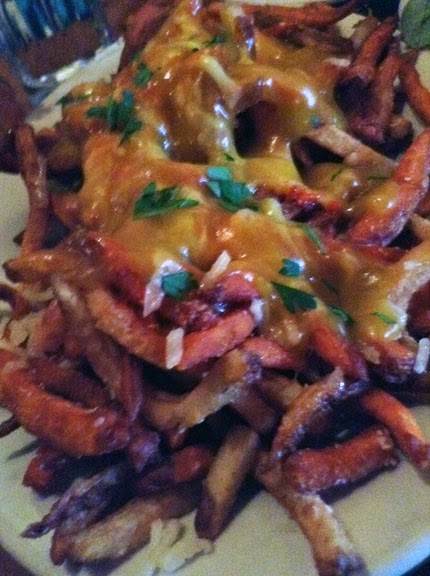 I had a very nice Fiddlehead IPA with the meal, which we started with the Duende Salad.  We needed some greens at this point in our trip, but this salad was alluring for the additions of house-pickled beets, whipped local goat cheese, and an orange blossom vinaigrette.

To offset those greens, though, we also had the poutine and the Parisian oysters.  Both were quite good.  The poutine wasn't exactly traditional, but it wasn't pretending to be, and this was a creative and tasty version, featuring a mix of regular and sweet potato fries, chunks of Grafton cheddar, their homemade hot sauce, and a butternut squash gravy.  I would have liked a little more of the gravy, but nevertheless this was a very satisfying dish.

The Parisian oysters were perfectly fried, retaining a lush and creamy interior, and were covered in a chive creme fraiche, mustard pickled shallots, and local bacon that was smoked and cured.  The oysters would have been just fine and good on their own with the creme fraiche, but some of the bites here, when including both the bacon and the shallots, were stunning.

The menu at Duino Duende features a lot of reasonably priced items, and, as noted from the above dishes, a lot of creativity.  The restaurant is playing on traditions, using a lot of local ingredients and making several unique and thoughtful vegetarian and gluten-free dishes.  I like the concept and aesthetic of this restaurant on so many levels, but most importantly, they follow through with really tasty food. 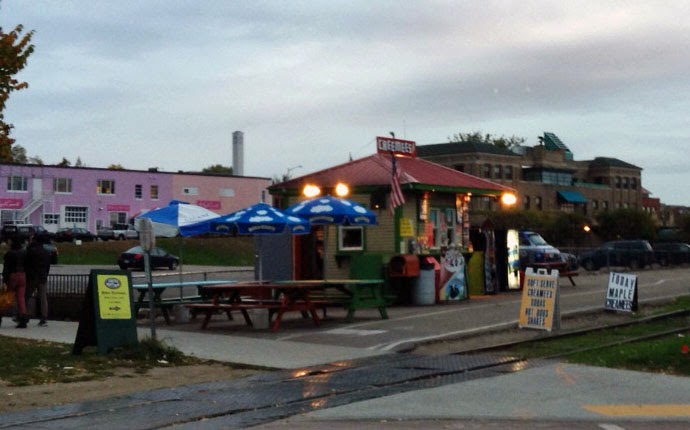 It may have been fall, but it was a warm weekend, which was perfect because I wanted to try a local delight, a maple creemee (your spelling may vary).  I turned down a few options along the trip, finally stopping as we reached the Lake Champlain waterfront and saw Ice Cream Bob's, which offers real maple creemees. 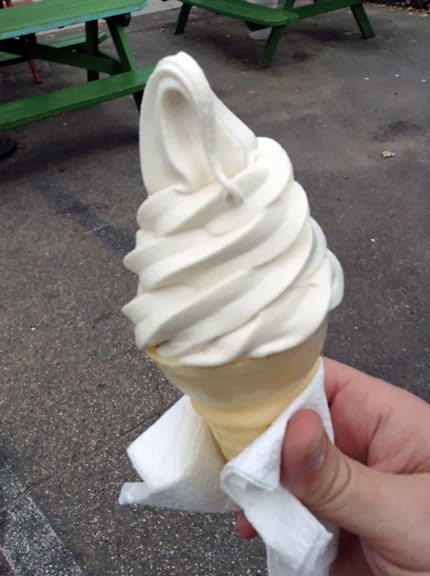 I'm a lover of ice cream in many forms, but I especially miss frozen custard from my few years spent in the Midwest.  When I saw that maple creemees are considered somewhat like frozen custard, I knew I had to get a taste of one.  Some say it's a myth that there's a higher butterfat content in a creemee (which would make it like custard, and inherently better than your typical soft serve), but I don't know--I thought maybe there was an extra creaminess to this ice cream, which worked perfectly with the added sweetness from the maple syrup that had been blended in.

Whatever its butterfat level, I certainly enjoyed my maple creemee from Ice Cream Bob's, which had the look of your average vanilla ice cream because Bob's doesn't use dye.

The setting was perfect--the graying sky blending with the water of the lake and the shadows of the Adirondacks in the background, a chill coming, signaling the true changing of seasons.

We headed out of Burlington a little later, and this creemee, enjoyed along with the beautiful views just a few minutes from the busy and fun downtown of the city, was a nice final note for our quick visit to the city.  I can't wait to go back, I hope for longer next time, with a chance to enjoy more of everything--the food, the nature, the beer--we just barely started to get a taste of this time.
Posted by Masticating Monkey at 11:52 AM