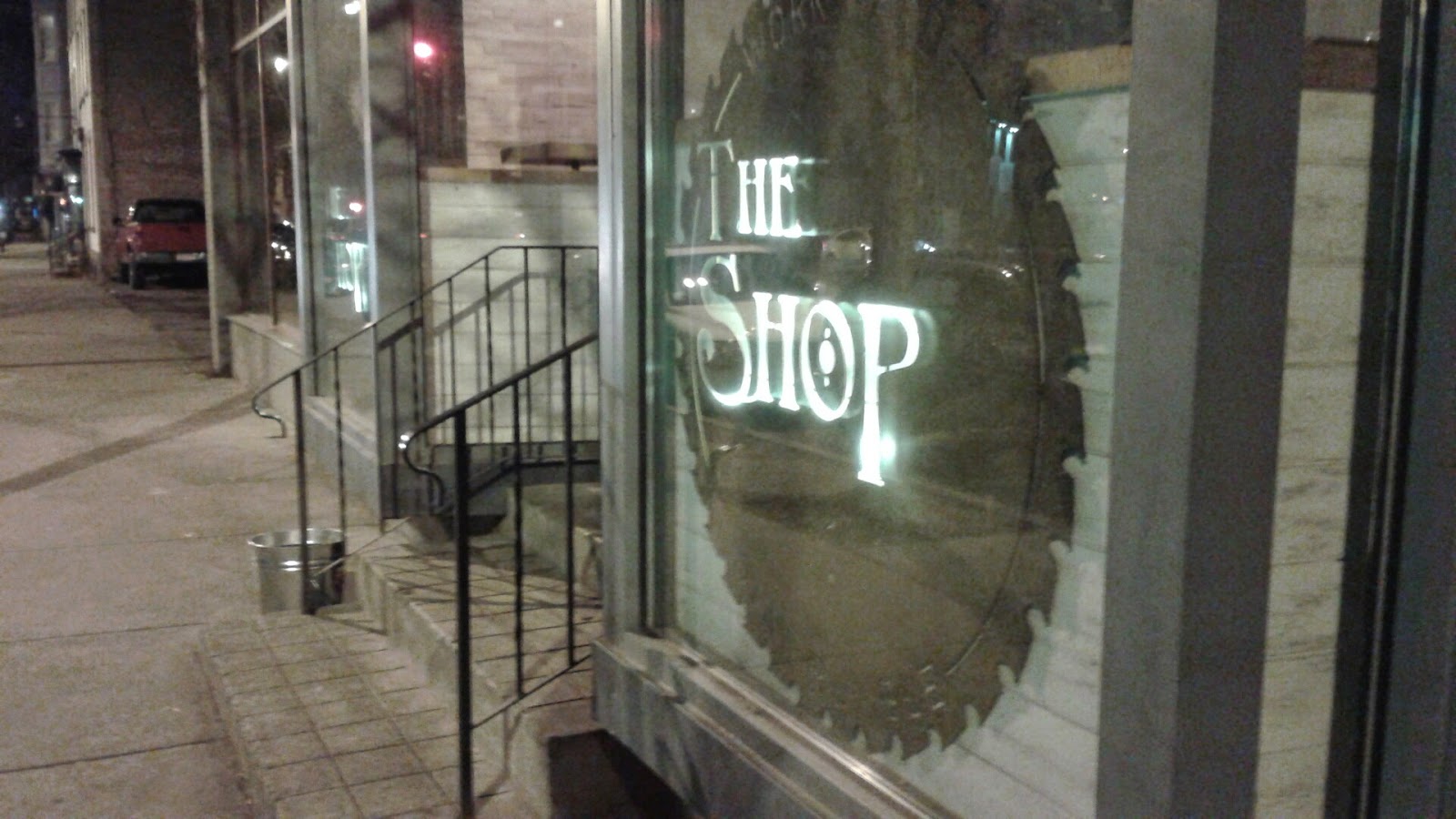 
The Shop is, in some ways, hard to classify. I've seen it referred to primarily as a bar, but I don't think that's fair or accurate, despite the limited early menu. Blodgett clearly is taking the food seriously; you don't hire a chef (the one who left just before opening) with "experience at high-end Philadelphia restaurants, including Morimoto," as stated in the Times Union article--and then a replacement, Rich Matthews, with training at Johnson and Wales and experience locally at Jack's Oyster House--unless you want patrons to visit as much for the food as for the drinks. 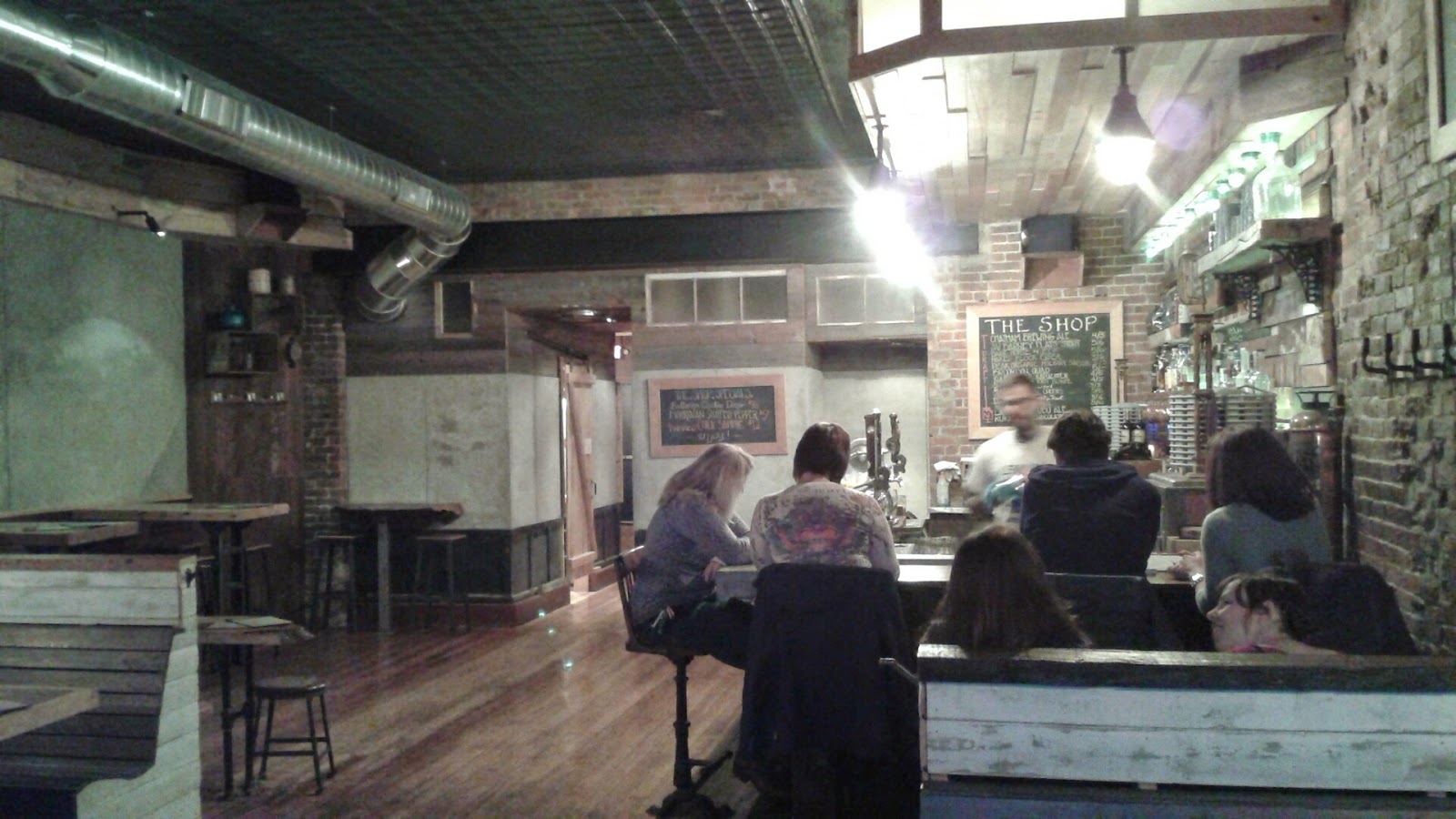 So while I could talk about the drinks--I enjoyed two beers from a fairly diverse draft list, and there were a number of cocktails I'm eager to try--I think it would be more useful to focus this review more on my dining experience.

When K and I visited early on a Saturday evening, we were in the mood for dinner. Immediately upon entering we were struck by the attractiveness of the space. My photos here can't do it justice, but The Fuj and All Over Albany did much better work on this front. Blodgett took the design work seriously and made this a memorable environment that fits the "wood shop" theme from top to bottom to bathroom (seriously--I have a picture of the bathroom at the end of this post).

Our two entrees were also enjoyable enough that K and I are quite eager to return to The Shop. And in a testament to the compelling nature of their presently small menu, even though there are currently just four entrees listed, we had a hard time deciding what to order (and we want to go back and try the others we didn't get). After several moments of indecision, I chose the chicken confit, while K went with one of the daily specials, something the restaurant called Ballerina Chicken--a dish I would love to see The Shop put on their regular menu because I want my own.

I'll admit it was hard to pass up the brisket and poutine entrees--I thought long and hard about whether or not it would be wrong to simply consider the poutine a large appetizer, finally relenting and deciding we'd just have to come back and try The Shop's unique version of it another time--and even the hot dog selections were intriguing. But after biting into my chicken confit dish, I was left with no regrets. 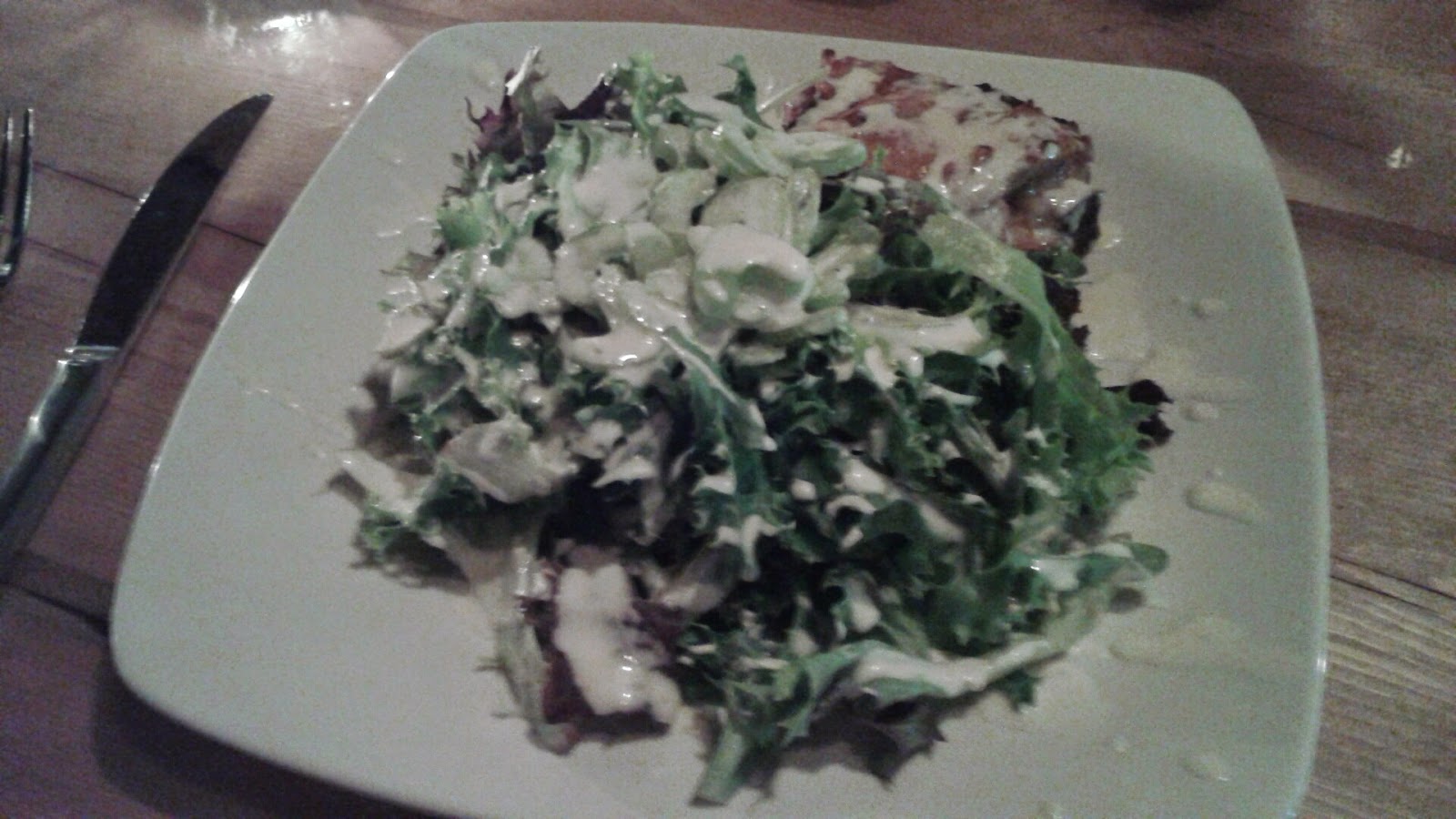 I can't say I order chicken often at restaurants; more often than not, this is a protein that isn't cooked in particularly interesting or inventive ways. The Shop's chicken confit is different and worth ordering even though the serving was a modestly-sized piece of bone-in chicken thigh (along with a huge pile of leafy greens--not the red romaine hearts that were stated on the menu--covered in a very tasty buttermilk aioli dressing that was also spread across the chicken).

Chicken confit is not your typical chicken dish, though. The process of confit is long and infuses a lot of flavor from whatever fat the protein is cooked in. The Shop's chicken confit thigh was pink inside from that slow-cooking process and full of a rich taste that's not often found in chicken (it didn't hurt that this thigh was bone-in, which I believe only increases the dark meat flavor). And then there's the skin, which was crisped up beautifully before serving. I could have eaten an entire plate of that skin, health concerns be damned.

K's dish, this special called Ballerina Chicken by The Shop, was in limited supply, so we were lucky to be there early enough to get one before the restaurant ran out. Since this wasn't on the printed menu, I don't know all the details, but it was essentially a stuffed chicken breast covered in a creamy sauce, served atop a latke. This picture doesn't really do it justice: 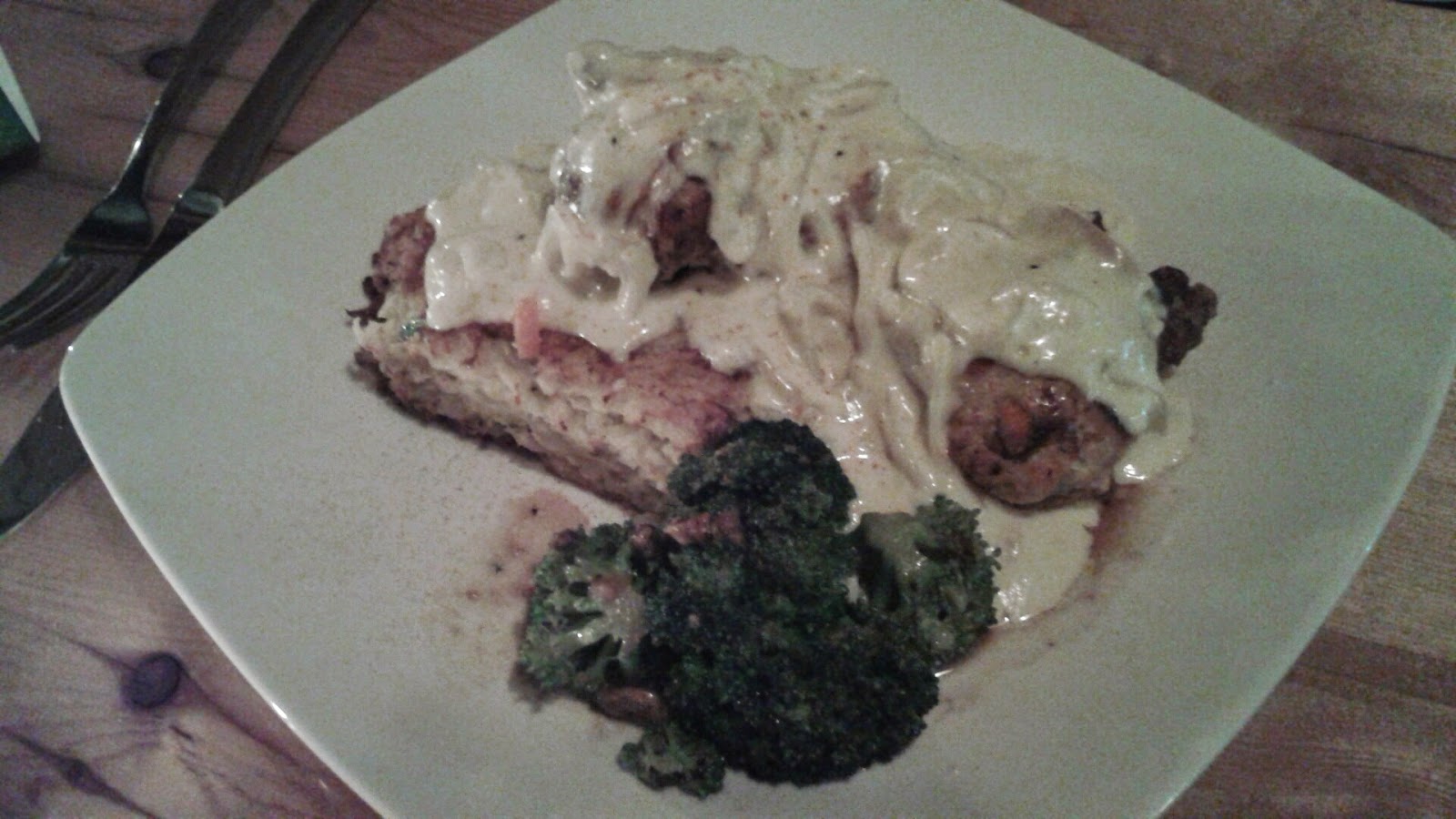 Our waiter said that shrimp was part of the stuffing, but K says she didn't specifically taste it. The sauce was rich and complex, not too heavy, with what might have been a hint of fish sauce. The side of broccoli was simple but tasty, similar to a version I like to make at home--seemingly stir-fried with soy sauce and garlic, the crunch-level of the broccoli just right.

With the success of the recently-opened Namu Korean BBQ also in mind, I have to say I'm rather enthused to have two exciting and so far successful new restaurants in the Capital Region. Namu has continued to impress since I wrote about it, while The Shop shows a lot of promise.

In fact, I'd love to see The Shop continue to ramp up the "sophisticated comfort food" approach as they expand their menu. The day before K and I visited, we were down in Beacon, hoping to grab an early dinner at The Hop, a popular restaurant that describes itself as serving "craft beer and artisanal fare." Their menu, which had me pretty excited, is something I think The Shop could imitate: appetizers and entrees that (I presume) are big on flavor and more inventive than what's served at your average casual restaurant. Unfortunately we didn't get to eat there as the wait would have likely led to a parking ticket. We'll be back one of these days, I hope.

But more than that, I hope The Shop can serve as that kind of place for us right here at home in the Capital Region: a place that excites me for not only the beer or cocktails, but for casual food that is more complex than pizza and wings. So far, so good, and I'm eagerly anticipating their next move.

And one final note: this is the first establishment that has ever made me feel a need to pull out my phone and snap a picture of their urinal in the men's room. This restroom alone should make people want to visit (and bring all their friends): 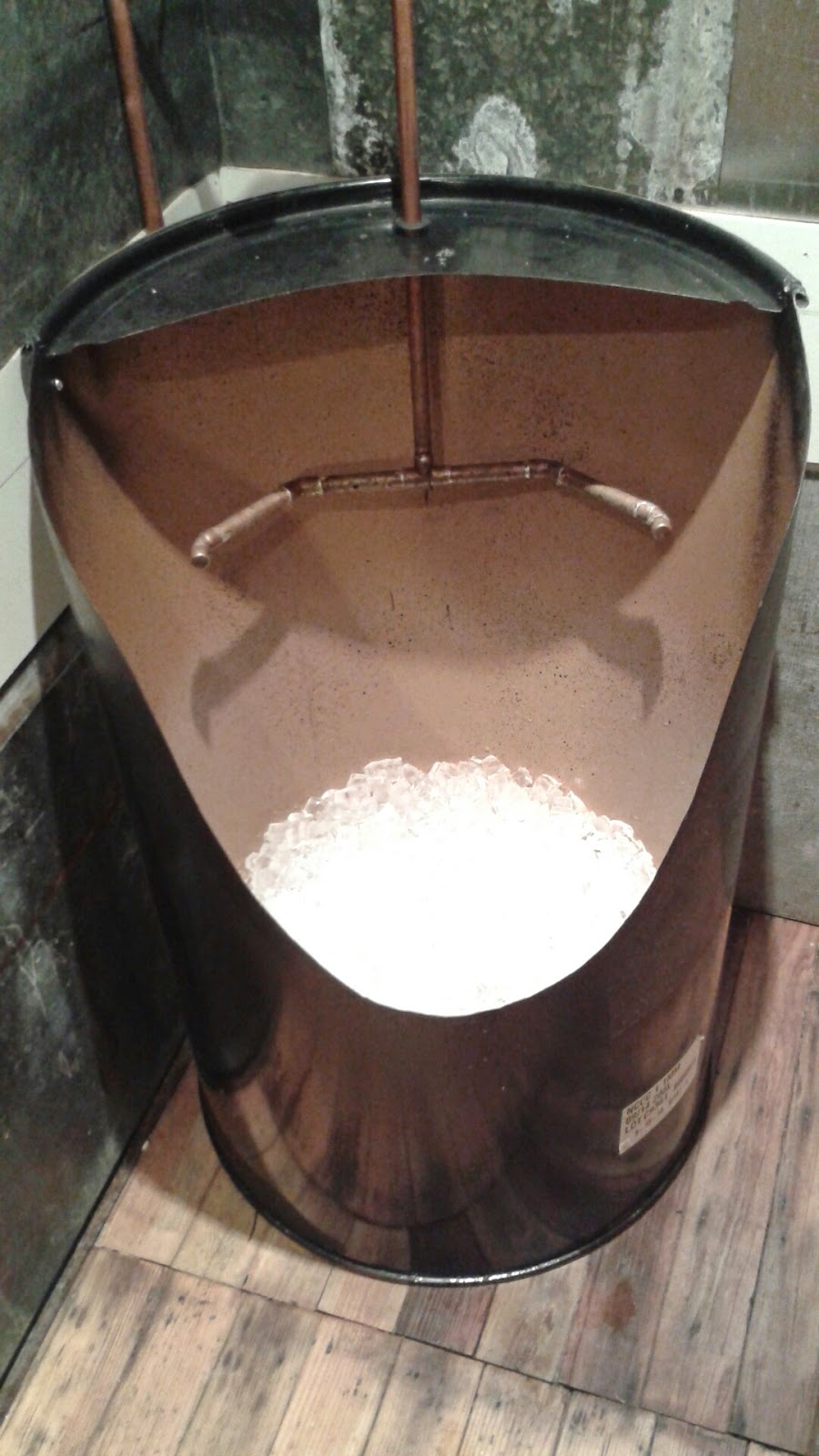 The Shop is located at 135 4th Street in Troy, NY
Posted by Masticating Monkey at 2:05 PM