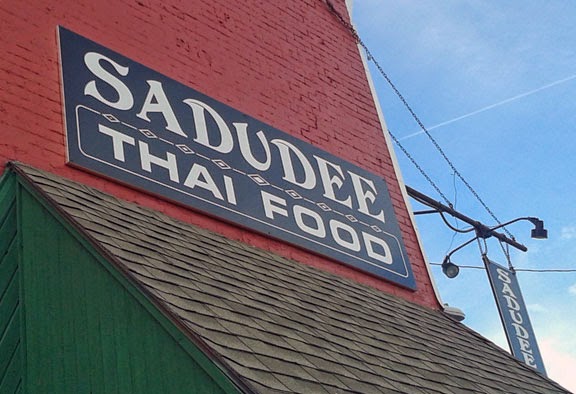 I understand the feelings of many area residents that we don't exactly need more Thai restaurants here in the Capital Region, but the fact that a new one just opened up in my neck of the woods is pretty exciting.  I've only been to Sadudee Thai Restaurant in Watervliet once so far, and would prefer to check out more of the menu before writing about it, but judging from the emptiness of the space on a recent Saturday night, I figure it's flying under the radar and could use some good word of mouth.

Because this one experience showed that Sadudee might be right near the top of the list of area Thai restaurants.

Located at 1401 Broadway in the former home of Gianna's Pizza, Sadudee is far from a fancy space, and it feels kind of off the beaten path, even by Watervliet standards.  That's not to say it's an unpleasant space--it's clean and comfortable with ample seating--but it's not exactly a surprise that it used to house a pizza joint, the layers of red paint being just one giveaway. 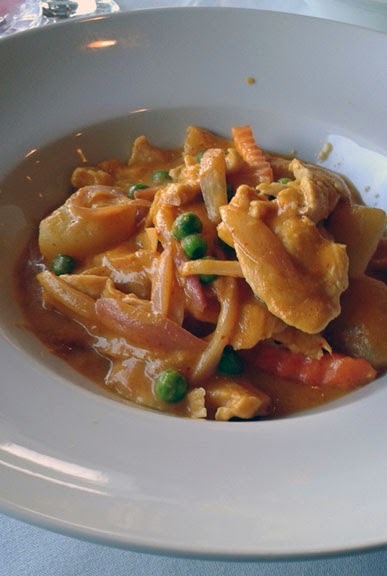 Meanwhile, service was friendly, attentive, and quick, but not overbearing, something that can't always be said for restaurants that are rather quiet (K and I were at one of only two occupied tables at the time).   Do you ever notice the way servers at some fairly quiet restaurants stand and stare at you while you wait for your food?  I think of it as the Babu Bhatt syndrome, from the classic Seinfeld episode.  Thankfully, that wasn't the case at Sadudee.

K and I started with what's become a somewhat regular appetizer for us at Thai restaurants lately, the somtum (papaya salad).  The somtum was reminiscent in size and appearance of those we've had elsewhere, prominently featuring the matchstick slices of green papaya, but it was particularly satisfying because Sadudee wasn't shy with their use of fish sauce and pepper for heat.  So while this was a typically refreshing way to start the meal, there was an assertiveness to the somtum that just isn't found at many restaurants.

The somtum was just the prelude to our two entrees, a pair of curries for $12 apiece.  There are seven options available on the Sadudee menu, and that's not even accounting for the different protein choices (we both went with chicken this time).  While on another occasion I might want to try any of these variations--the pumpkin curry might be the most intriguing--I went with the yellow curry while K chose the mango curry.

The yellow curry is said to have its roots in Indian cuisine, which isn't much of a surprise.  I found the taste of this dish to be reminiscent of Indian curry, stronger on the curry and cumin than your typical Thai curry.  With the presence of the coconut milk adding thickness and richness, this curry was very tasty.  The chicken was tender, while the vegetables--potatoes, red onions, green peas, and carrots--were cooked nicely, crisp and not soggy, and nicely balanced.  (In other words, this wasn't one of those curries that was overfilled with huge hunks of onions; here, the red onions were cut into slivers in a way that made it clear they were there for flavor, not as cheap filler.) 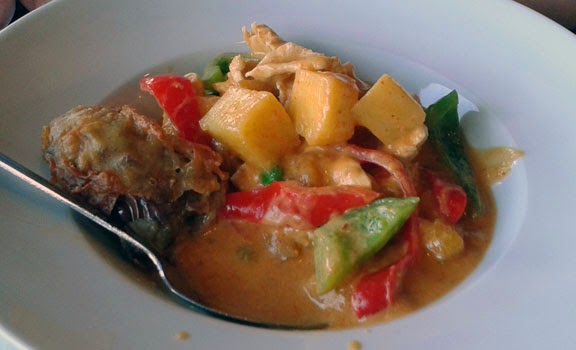 K's mango curry was as lively a bowl of curry as I can remember (judging from my small sample of it).  She was pleased as well.  There were numerous chunks of mango and pineapple, and this seemed to work quite harmoniously with the classic curry flavors that were present, and added a nice complement to the other vegetables on the plate: red and green peppers and green peas.  With a touch of Thai basil in there, too, this was another dish with a remarkably deep flavor profile.

Our curries were each served with a slice of deep-fried Japanese eggplant.  The breading was crunchy on the outside, but inside the eggplant was beautifully tender, practically melting when I bit into it.  This is the kind of random bonus food I can certainly endorse.

So yeah, Sadudee is yet another Thai restaurant in the Capital Region.  But it's also pretty damn good, from first glance, and much of the menu is quite reasonably priced.  With lunch entrees like pad thai at just $7 and lunch curries at $8, I can't wait to return to work through more of the menu.

Sadudee Thai Restaurant is located at 1401 Broadway in Watervliet, NY
Posted by Masticating Monkey at 10:03 AM