My Many Frustrations with Capital Region Coffee Shops

Back in Boone, NC, where K and I lived for a year before moving up here to the Capital Region, there's a coffee shop called Espresso News that we were particularly fond of.  I've been thinking of Espresso News lately because I've been fairly underwhelmed by our local coffee shops.

What was it about Espresso News?  Part of the appeal was the shop's location; it was a five minute walk down the hill from where we lived.  Where we are now, in the hinterlands of the Latham/Watervliet suburbs, there's no choice but to get in a car.

But beyond that, Espresso News was a place that exuded the vibe of Boone itself: relaxed, an open space for everyone from students to professors to business professionals to tourists.  Downstairs was a simple, open room with many tables and outlets, while upstairs--remodeled to include a wine/beer/dessert bar--there were more tables and a number of cushioned chairs.  The coffee, roasted in-house, was excellent.

That's not to say it was perfect.  Sometimes it was impossible to find a seat because it was so convenient and popular; sometimes there were--how's a polite way to put this?--outdoorsy hipsters of a certain Boone brand who smelled as if they hadn't bathed in a week.  This could be...distracting.  But maybe this was part of its charm; you never knew what you'd see there.  Once we saw a pig on a leash in the outdoor seating area.

Ultimately, Espresso News was just the kind of spot K and I like for a coffee shop.  It was usually a great spot for us to settle in for a few hours and work.  As writers and teachers we both find this to be the most important aspect in a coffee shop.  The place was open late every night, so being, uh, not morning people, we didn't have to worry about the shop closing while we were on a roll.

I understand that there are some places in the Albany area that are making some good coffee and espresso drinks, but as I said, that's not the most important aspect of a coffee shop for us.  Here I want to explore some of the problems I've found in in these area coffee shops, and highlight a place we found in Hudson that we really like (except that it's almost an hour away). 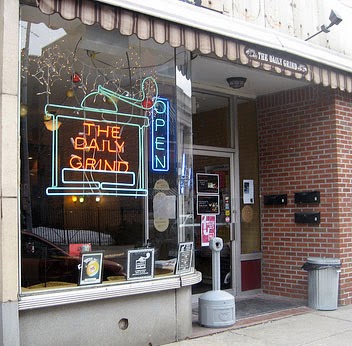 First off: I understand that in some ways this might be a business decision--selling more food to make more money.  That said, so many area coffee shops act like restaurants.  At a place like Professor Java's in Colonie, the table service is fine except that sometimes they forget about you and it takes a long time just to get your drink.  Or it takes a long time to pay and get out; you sort of need to plan ahead if you need to run.

It's pretty much the same way at The Daily Grind in Troy where--and maybe it's just me--I always feel a little awkward getting just a coffee and sitting down to work for a while, and the tables are too small for more than one person to work at.

At Uncommon Grounds in Albany, there always seem to be so many people in line to get food, and then sitting down to eat, that even though there's no table service the wait time in line can be a little long.  (I also always wonder if I need to wait in line behind the food orderers if I'm just getting a drink--is it okay to cut the line in those circumstances?)  And then due to that popularity, it can be crowded enough that it's hard to find a table to work at.

The idea of a coffee shop posing as a restaurant isn't the biggest issue, but it can be annoying in combination with other factors.  And it's something I feel is somewhat unique to the coffee shops in this area, at least compared to the several other places we've lived over the past decade.

Limited Hours and the Market

Granted, this wouldn't be as much of an issue if we were morning people, but especially being on college teaching schedules, with unique hours and lots and lots of work to do outside the classroom (grading 75 essays can be time consuming and best aided by caffeine), late hours for a coffee shop can be particularly useful.  And it's just nice to be out and doing something--not always at a bar--at night sometimes. 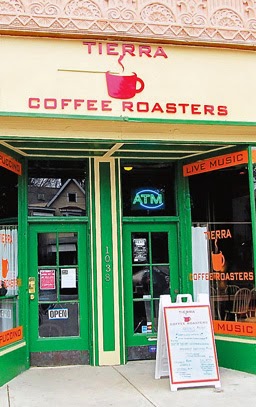 Outside of Starbucks, there aren't many coffee shops that actually stay open past 6 p.m. out here.  In Troy, for instance, there are no options currently that offer hours beyond six on a regular basis (the Lucas Confectionery doesn't count because every time I've been there or observed it it's always seemed too crowded and too lively for working).  The same goes for downtown Albany, such as on Lark Street, where The Daily Grind and Caffe Vero also close fairly early (Caffe Vero is open somewhat later--8 p.m. during the week--but there's barely any seating in there).

Our favorite coffee shop in the area might be Perfect Blend in Delmar--even though I always forget the name and just call it the Dave Matthews Cafe because of all the concert posters on their walls--but they're not open later than six.

There are a few places that do stay open later, but I think Professor Java's is the only one of these places located outside the Pine Hills or UAlbany areas.  That makes sense as studying students can certainly use late night coffee shops to haunt, but the fact that there seems to be little market outside those students leads me to other questions.

Namely, what is it about residents of this area--particularly in the cities, downtown Albany and Troy, where I'd have naturally assumed there'd be such a market--that there's no need or desire for coffee shops that are open late?  Where do people on dates go, say, after dinner or a movie if they don't want to go to a bar?

I think it also might speak to a lacking literary scene in this area.  In so many other cities, you'll find people working at independent coffee shops, hammering away on stories, novels, screenplays.  But overall I've found that--even with the presence of the New York State Writers Institute--there isn't a very vibrant literary scene in this area (I've heard this from others, too, who have lived in the area longer than I have).

Not to denigrate state workers, but I suppose this might be a result of living in a place where so many residents work in government.  While there are pockets of art and culture in the area, for the most part these are just not very mainstream, and I think that spills over to the coffee shop culture.

There are a couple parts to this--let's go back to Espresso News as an example.  First, the upstairs especially was quite attractive there, comfortable, cozy.  But downstairs, even though it wasn't beautiful or anything, there were just all these people working away on their computers or reading--it was inspiring and made me want to be productive.

In terms of aesthetics, it's hard to say what works; some nice wood paneling or attractive fixtures are always nice.  Hudson River Coffee House in Albany is pretty nice in this regard, set in an old phone company building, and their coffee is awfully good.  But then many of the chairs are too low for the tables--I always feel like I need a booster seat--and during the school year it's sometimes hard to even get a seat.

Nearby Tierra Coffee has some good coffee and solid hours, but I've never found the space particularly comfortable for working.  Professor Java's is okay, but one room has a setup that's not terribly conducive to working (most of the tables are far from the limited outlets and with no music playing in that room it's too easy to hear everyone else's conversations), and the other room isn't lit well enough for reading or grading after the sun starts to set.

And then there's Starbucks.  The MANY area Starbucks.  For one, I'd rather support local businesses.  Beyond that, there's the coffee (meh), the strange temperature control in many of the Starbucks (I don't want to have to bring a jacket with me in the summer), and many people there seem to be using the tables as their office--loudly conducting interviews or holding meetings either in person or on the phone. 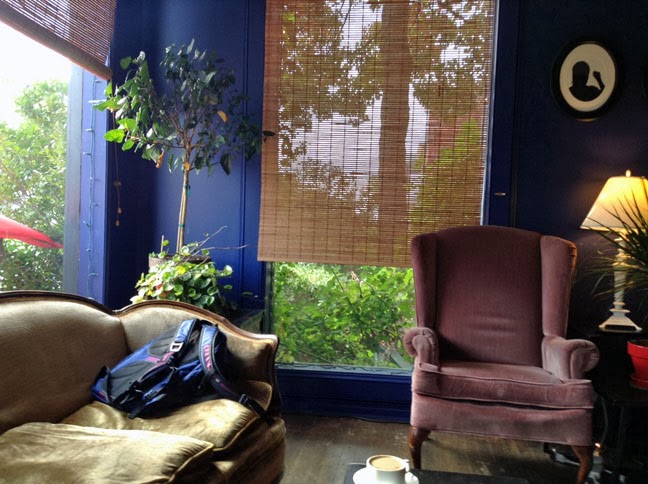 I know I might be coming off as kind of whiny or unreasonably demanding, but I feel like I've known enough coffee shops--even simple ones, suburban ones--all across the country that have worked well for what I'm looking for.

A good example, I found last fall, is right down in Hudson: Rev Coffee House.  We only visited once, but it hit all the right notes.  The interior is eclectic and attractive--even though many of the decorations look like they came from a thrift store, they somehow fit together to create a comfortable, homey vibe--with a variety of seating, from nice tables to a slightly beat-up antique couch.  And there's even what appears to be a nice outdoor area out back for sitting when the weather's nice.

The coffee is good.  Again, I'm no connoisseur, but I think I can tell the difference between bad (say, Spot Coffee in Saratoga, which has a simple and solid space but iced coffee that's tasted sour to me on multiple occasions), mediocre (Professor Java's), and good.  Rev did a nice job with my iced coffee, while K was very happy with her two drinks, an Americano and a Cuban, which kept her up for approximately four straight days. 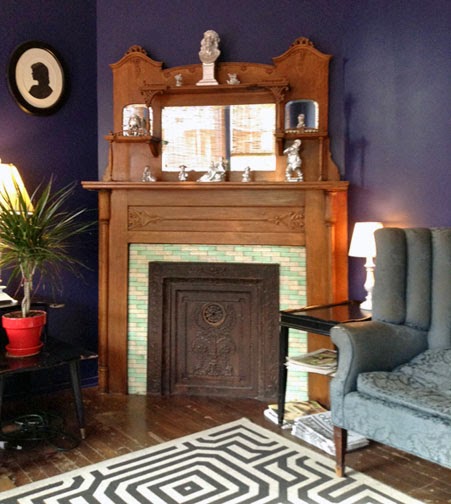 And the location is good--just off the main drag in Hudson, on Warren Street--and the hours work (open until 10 p.m. Monday through Saturday).  It wasn't crowded when we were there on a Saturday in October, but those who did settle in at the shop seemed hard at work.

I think of all the wonderful spaces in downtown Troy, the seemingly significant population of young professionals in that area, and wonder why there isn't a coffee shop like Rev there.  And even in the suburbs, like the Latham/Loudonville area, why can't a non-Starbucks, non-Dunkin' Donuts coffee shop (even a chain like Spot--I'll have a tea--or something with more of a national presence) move in, say in the Fresh Market Plaza at the corner of New Loudon and Watervliet-Shaker?

Until then--and outside of our fairly rare visits to Hudson--we'll continue to try working at all these local coffee shops, but remain at least slightly unsatisfied for a whole variety of reasons.

* And one final complaint: To all you coffee shops that still charge 65 cents or a dollar for soy or almond milk, I ask, Really?  It's 2014--these regular milk substitutes aren't exactly exotic or expensive, so please quit unnecessarily nickel-and-diming your customers.
Posted by Masticating Monkey at 1:59 PM