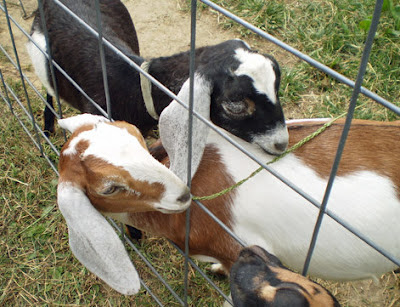 In his essay "The Case for Short Words," Richard Lederer writes,

When you speak and write, there is no law that says you have to use big words. Short words are as good as long ones, and short, old words—like sun and grass and home—are best of all. A lot of small words, more than you might think, can meet your needs with a strength, grace, and charm that large words do not have.

This passage, and the sentiment from the entire essay, seems relevant because, in thinking about the three farms I visited on Saturday as part of the Washington County Cheese Tour, I'm taken back to that old freshman writing problem of feeling the urge to use too-large words to get my point across.  How else will people understand just how splendiferous the vistas are at 3-Corner Field Farm?  Or how resplendent the fields at Consider Bardwell Farm once the sun broke through?

I'll see what I can do without all those syllables.  Some pictures might help my case (though that's not a tip for any freshman comp. students out there!)--especially ones featuring adorable farm animals.

I don't want to disparage the places I've lived in recent years (western North Carolina, northeast Ohio, southeastern Kansas), but one of the things that excited me about my move with K to Albany this summer was the knowledge that there's more going on up in this corner of the country, within driving distance.  Not just the big cities, but upstate New York, rural New England.  I'll admit, in those previous residences I should have gotten out and done more, but I'll also admit that when we did check stuff out, things were sometimes, well, lame.

The Washington County Cheese Tour was anything but.  I've become something of a cheese snob in recent years, falling for the stinky soft cheeses, the funky hard ones.  It wasn't just that the farms we visited struck the right chord for my cheese farm fantasies, but their products were also really, really good.  I'll get into the details of that in Part II of my Cheese Tour report tomorrow.

This year's tour fell on the perfect weekend for us; K's friend F was visiting for the weekend from Boston, and as a longtime resident of Wisconsin she is, by law, required to be a cheese fan.  Those pesky storm warnings on Saturday morning were a little troubling--and eventually we did get caught in a brief monsoon while walking around Manchester, VT--but I'm glad we ignored them and made the drive north.  Not a drop of rain fell while we were on any of the three farms (Sweet Spring Farm, 3-Corner Field Farm, and Consider Bardwell Farm), and the drive was nothing less than lovely once we broke through Lansingburgh. 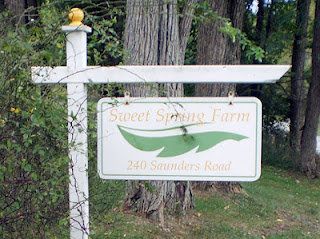 It was no easy task deciding which of the six farms to visit on Saturday, especially since we weren't exactly out the door first thing in the morning after F's delayed arrival by train on Friday night.  What it came down to is that K and I are both fans of sheep's and goat's milk cheeses, and we'd also tried (and really enjoyed) one of Consider Bardwell's cheeses shortly before leaving North Carolina.  Sweet Spring Farm is a small goat farm an hour from our place in Watervliet, and we made it our first stop on the tour.

Sweet Spring was clearly the smallest operation of the three we visited, and unfortunately we didn't get a tour and by the time we arrived, a little after noon, they were sold out of the Carriage House, their aged raw milk cheese.  But we did pick up some of the Black Pepper Chevre, and I bought maple syrup from one of the handful of vendors at the farm, Adams Sugar House, from nearby Shushan.

Plus, there were the goats.  There were the kids, pictured above, who were total sweethearts (and no one stopped me from petting them and feeding them stalks of grass), and the Cossayuna Nubians (no petting them) seen below: 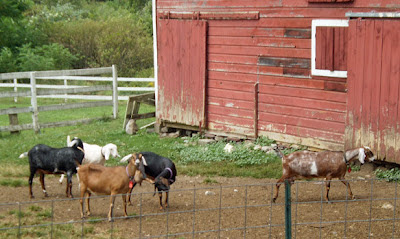 Sweet Spring Farm made for a nice start to our day, but I'd recommend doing the guided tour; from what we overheard, it sounds like the folks who run the place have some interesting stories to share. 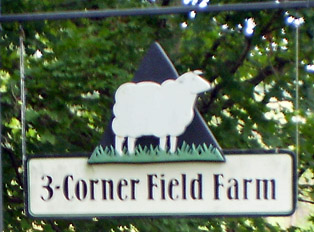 From the goats we moved on to the sheep, and one of less than a hundred sheep-only dairy farms in the nation, 3-Corner Field Farm.  An easy drive, maybe twenty minutes from Sweet Spring, 3-Corner Field is named for the shapes of their fields, which are cut by a road and visible from a bluff.  This farm may be fairly small, but they run a well-oiled operation and have distribution of their cheeses to Boston and Brooklyn.

The folks who run 3-Corner Field are also serious about maintaining a natural, healthy environment for their sheep (and, subsequently, their customers).  Before you can even get past the farm's gate, you're required to scrub down the bottoms of your shoes, lest you leave any contamination on the grass that the sheep might graze. 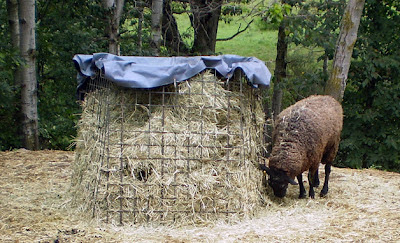 We were immediately approached by the farmers' daughter, who offered to lead us and a handful of other visitors on a tour.  There's something to be said for a teenager who is completely engaged in this kind of work; visitors to 3-Corner Field Farm were educated about the farm and its practices as they were led around the complex--from the milking station and cheese-making area to the hilltop where the sheep graze.  This was sharp stuff, the kind of experience that makes you wish for a different kind of childhood (even if you weren't exactly of the constitution to be doing farm chores after finishing your homework).

Following the tour, we were led back to a barn where the cheese tastings and sales were being held.  The line was slow-moving, and I wandered off at one point to pick up a couple baked goods and wool cat toy, which was well-received back home by Mr. P (I might as well put this in the review with the cheeses, since the toy looks like a cheese puff ball).

When we made it to the tasting area, it was clear why the line was slow-moving: the farm's cheesemaker and others were generously and patiently offering tastes of all their products, each of which was very good.  We started with the yogurt (of which we grabbed a medium-sized container) and worked our way down the line, sampling everything from sheep's milk ricotta and feta, to the Brebis Blanche (almost like a cream cheese), the Shushan Snow and the Frere Frumant, the latter an Esquire Cheese of the Week.  Several of these cheeses came home with us, but we were especially taken with the smokey taste and interesting story of the Frere Frumant, which is sent off to be smoked nearby by Brother David of the New Skete order of monks. 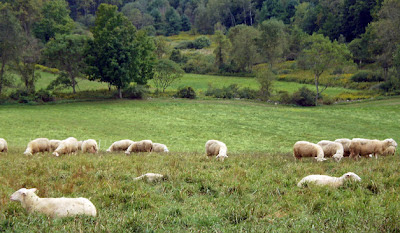 The wonderful experience at 3-Corner Field Farm was capped off by a visit to the soap vendors near the main gate, the folks from Log Cabin Farm Soap, who use the sheep's milk from 3-Corner Field Farm to make several soaps that enticed K and F--and which I would have bought as Christmas gifts for some members of my family, if only I hadn't already given them soap last year. 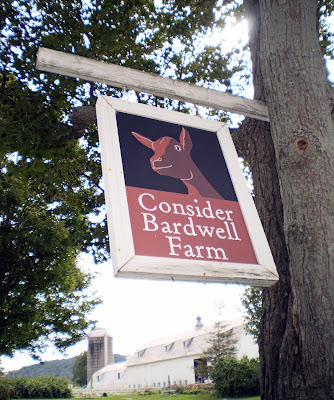 It was just after 3 when we reached Consider Bardwell Farm, just a hop over the New York/Vermont border, and by this point things had quieted down for the day.  The last guided tour had already departed, so we were on our own to explore the grounds and visit with the owner of the farm, Angela Miller, a literary agent in New York whose book about taking up this new career, Hay Fever, was available at a discount alongside a variety of cheeses. 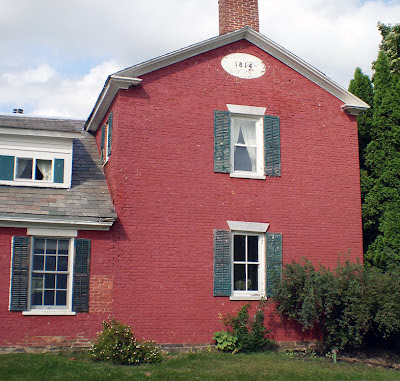 Having free reign to explore Consider Bardwell on our own wasn't a bad thing; we wandered around the grounds, stopping to admire both the farm house and a beautiful red brick home built in 1814, and view some of the farm animals.  Consider Bardwell features both cow's and goat's milk cheeses, but we only spotted the goats, who seemed to be having a nice time lounging in the grass dampened by some earlier light showers.

Consider Bardwell may be the biggest operation of the farms on the Washington County Cheese Tour, but that doesn't mean that this has the looks of a commercialized farm.  From the barns to the pens for the goats, everything has a rustic look to it--the feel of a place that has been doing this kind of work for a long time.  And this is true: the farm was home to the first cheese-making co-op in Vermont, started in 1864 by Consider Stebbins Bardwell himself (hence the name of the place). 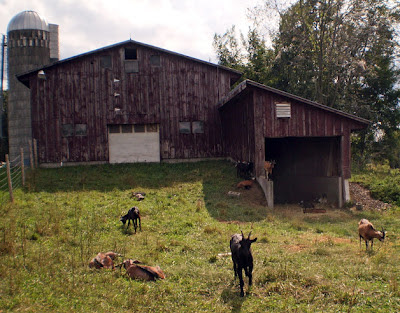 This is another farm dedicated to making high quality, antibiotic and hormone-free cheese.  As I mentioned earlier, K and I first discovered Consider Bardwell shortly before moving to Albany from North Carolina--having the opportunity to taste (and buy) more of their cheeses was one of the reasons we were so drawn to the Cheese Tour.  We tried the Dorset, Manchester, and Pawlet, and left with a pair, along with Hay Fever and a cup of freshly-made apple cider.

On the way out, we were able to visit with one of the pigs across the road--a fine way to cap the afternoon, considering this is how we'll be looking soon with all the cheese we hauled home from the tour. 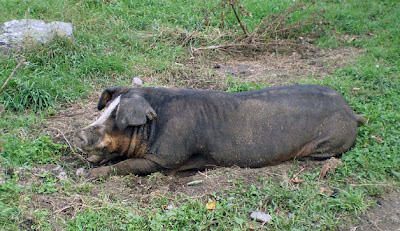 Posted by Masticating Monkey at 11:45 PM

Email ThisBlogThis!Share to TwitterShare to FacebookShare to Pinterest
Labels: Cheese, Eating out, Travel