I know it's just fast food, but I'll admit, I can be something of a snob when it comes to fast food burgers.

I've ranted about disappointing and overpriced local burgers on the blog before, I've dropped bits of praise for North Carolina chain Cook-Out, and I'm not shy to admit that as a California native the In-N-Out burger chain has always been tops for me.

The issue with In-N-Out is that its locations are confined to California, Nevada, Texas, Arizona, and Utah.  And while I've been living in the eastern half of the country over the past decade, I haven't found myself able to make too many trips back home to the west very often.  This summer, though, K and I flew out to visit her family just outside Las Vegas and I made a quick trip north to see a few members of my family.  Of course getting my hands on some In-N-Out wasn't my top priority, but let's just say that I was pretty determined to make that happen at some point.

I did get to In-N-Out on that trip, and it was still as good as I remembered it--better in some ways, in fact.  But I also recently made a weekend jaunt down to New York City and got my first taste of Danny Meyer's praised and popular Shake Shack burger.  And I have to say, those were some good burgers, too.  In the end, my heart still rests with In-N-Out, though not fully because of the food itself. 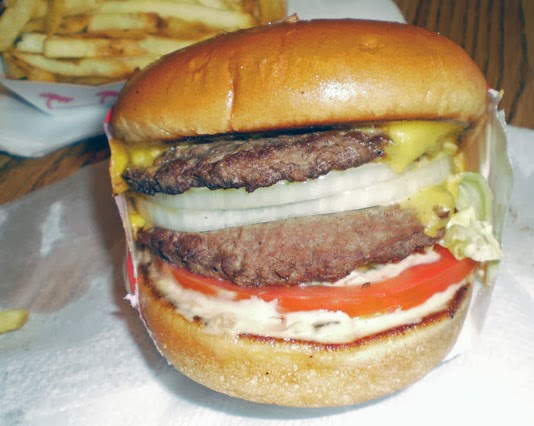 My first memories of In-N-Out date back to high school; the chain opened one of its first Northern California locations in 1995 in the fairly small town I lived in.  The burger shop already had a well-established reputation at that point, and it showed in the long, long lines of cars that snaked through the parking lot and out onto the street.

I don't remember eating there often in those days, maybe because of the crowds, but all my family certainly liked it: for the food, for the way in which it seemed different from McDonald's (where, blech, I worked), and for the way the palm trees adorning the restaurant's walls and cups evoked pleasant memories of days spent at the beach (a vacation-only activity, even for us California residents).

And in college, there was an In-N-Out location just minutes from campus in Los Angeles, right around the corner from LAX, so it would be one of the first things I noted about the place anytime I flew back.  But I think In-N-Out always seemed more special after I'd left the state; because it was one of those things I could only get when I returned home, it took on a special status in my mind.

Here's the thing, though: these burgers are good, and compared to some other places, they're pretty damn cheap, too, which is impressive because you know they could get away with charging more.  I got myself a Double-Double during my visit this summer--that's double meat and double cheese--for $3.20, and found the quality of the burger just as I'd remembered it.  The meat isn't cooked to order, so it's not a thick, juicy patty, but with the gooey melted cheese and the special sauce, there's no sense that you're eating some dried-out little burger.  I'm not a fan of tomatoes on my burgers, so I removed that; still, this burger was a satisfying size.  The bun was toasted perfectly, and the special sauce--rumored to be Thousand Island or a knockoff of the dressing--does work in harmony, with its touch of sweetness, with the meat and cheese.

I also learned some things over the years that improved what I always thought was the one weak spot of In-N-Out: their fresh-cut fries.  The chain's not-so-secret menu includes extra crispy fries--basically, fries cooked for 5 1/2 minutes instead of 3--which I found totally alleviated the limp, floppy nature of the typical In-N-Out fries.  So now the fries possessed great texture to go along with a true potato flavor.  I don't need a soda with my fast food, so here I got a great burger and great fries for less than $5--a true "value meal," if you ask me.

And I'm happy to note that this quality isn't based just on memories or nostalgia.  Did it help that I took the burger and fries home and enjoyed them at my grandmother's dining table?  Certainly.  But I consider that a special bonus; this meal from In-N-Out would have been good anywhere. 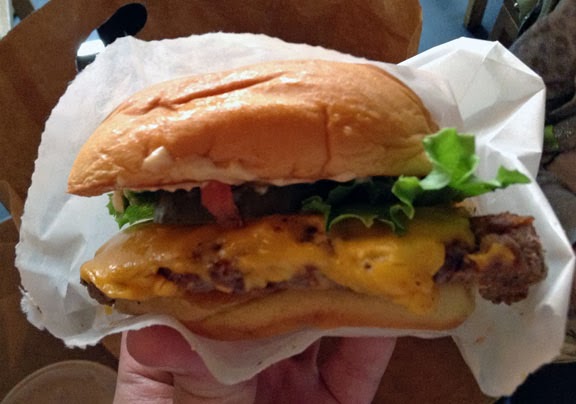 I've been hearing about this small chain for several years, wanting to check out one of their locations in the city, but never got around to it until a recent weekend trip to Manhattan.  K and I and her brother met up with her cousin and her cousin's daughter, who got there before us and kindly picked up our burger and fries and grabbed a table in the very, very busy Theater District location.  This was a Saturday afternoon, so no surprise there.

It's tough for me to give Shake Shack a completely accurate rating.  As much as I love my visits to NYC, the crowds there can certainly be overwhelming at times for those not used to them.  Some of us ate our burgers while standing, which is fine, but not ideal for truly judging the food.  It's hard to separate the overall experience from the taste, after all.

That said, I thought the burger at Shake Shack was quite good.  At $4.60 for a single cheeseburger, I thought the value was solid--better than at Five Guys, for instance, or Albany's own Juicy Burger.  Like In-N-Out's, Shake Shack's was also a fairly substantial burger.  The patty, a quarter pound of a good mix of beef (according to this home-made version by Serious Eats), was thick enough to satisfy, and actually cooked to leave some pink in the middle.  Slightly juicy and tasty from the blend of beef, I could see already why there was such hype for this burger.

And the other parts were thoughtfully chosen as well.  The bun is, on the surface, nothing special, something you could buy at the supermarket--a Martin's Potato Roll--but it's just right.  Toasted less, I thought, than the In-N-Out bun, it had a really satisfying squishiness, and I do like the taste of these rolls.  The classic slice of American cheese melted nicely, and again we have a mysterious special sauce to provide good, balanced flavor.  J. Kenji Lopez-Alt tried to figure it out at the above Serious Eats link, and seemingly did a fine job of recreating it: a sweet, slightly sour, slightly spicy mayo-based blend.  Not unlike In-N-Out's Thousand Island concoction, but maybe a little more complex.

The fries at Shake Shack were good, too--a hearty serving of crinkle cut fries for $2.70.  I would love to try these one day alongside Shake Shack's frozen custard, one of the foods I long for here in the custard-less Capital Region, but considering we had a play to scamper off to, this wasn't the time for it.  Shake Shack does have a seasonal location at the track in Saragota, so my plan is to head up there on a weekday next summer, enjoy a burger and fries (maybe with one of Shake Shack's specially-brewed beers from Brooklyn Brewing), and hope to find a comfortable seat.

I'm not going to sit here and try to rate these burgers against one another; it's just not a fair fight when nostalgia and all these other external factors come into play.  But I will say this: Shake Shack gives In-N-Out a run for their money in my book, which is awfully impressive considering my personal bias.  Add in some frozen custard and craft beer?  Hmm.  This story might be far from finished.
Posted by Masticating Monkey at 10:29 AM

Email ThisBlogThis!Share to TwitterShare to FacebookShare to Pinterest
Labels: Eating out, NYC, Travel