When the organizers of Chowderfest in Troy decided to hold the event in mid-October, I'm guessing part of the idea was that these cups of chowder would serve as a way to warm the attendees standing outside in the crisp fall air. Instead, here we were with yet another day with temperatures around the 70 degree mark.  I'm pretty sure no one's complaining about that, and it sure made for a nice day to wait in long lines in Riverfront Park.

This was my first Chowderfest, and it really was something to see how many people came out for this event--I saw figures estimating attendance at 20,000.  For those who haven't attended (you might be in the minority now), several area restaurants--this year 17--set up tents and cooked their own special version(s) of chowder for the event.  Four ounce cups chowder could be purchased with tickets (one ticket per cup of chowder), which were bought for $1 each prior to heading to the tents.

While it's a pretty fun concept--shown by both the crowd and the fact that this is the seventh year of the event--I also noticed some problems with the execution of Chowderfest that made attending it fairly frustrating.  Below I'll lay out some of those issues, and recap a handful of the chowders I tried this year.

Too Many People, Not Enough Chowder: I arrived at Chowderfest at noon, two hours after the vendors started scooping chowder, and found that a number of the tents were already shut down, all out of chowder.

It's not like I went hungry or had my tickets go to waste, as there were still around 10 of the 17 restaurants left serving chowder at 12:30, but this kind of poor planning does take away from the fun of the experience for attendees.  Chowderfest was scheduled to run until 3; it's not like these places were running out of chowder at 2 p.m., which would have been more understandable.

Where Are We and Where Are We Going?: It's not so much that lines were long--that's understandable with such a large turnout.  It's that the end of one line was typically indistinguishable from the end of another line due to the way the vendors were arranged.  Also, from the middle of that swarm of people, it was impossible to see which tent was which in many cases.

Lots of these tents had signage only near ground level; with a crowd like this, where you're looking over the heads of so many others, there need to be signs up at the top of the tents.  Not many restaurants got this right, and I don't understand why the organizers of the event ignored such a common sense aspect (particularly in the seventh edition of this event!).

When Can I Get This Soup Again?: Some of the chowders served at the event were, from my own tasting and the reports I heard from others, pretty darn good.  You might think, then, that these four ounce cups would only serve as a tease, one that would get customers to come into the restaurants in the coming weeks so they could taste more of this delicious chowder.

The problem?  In almost all cases, it seems, the restaurants serving chowder weren't then going to put this chowder on the menu at their restaurant, even temporarily (the only one I heard about offering the chowder at the restaurant was the Albany Pump Station, whose chowder I wasn't even able to try).  Just another bizarre little business decision in an area filled with restaurants that seem to often operate in curious ways.

I'm Done with Chowder and I'd Like a Drink--Why Is It So Hard to Get One?: After sampling my six cups of chowder, I was interested in quenching my thirst--both from the chowder and the heat--with a nice beer.  But I didn't end up getting one.  Why?  First, at Chowderfest itself, it seemed like a real process: there appeared to be a long line in which you could buy $4 drink tickets, which only then led you to another line to get the drinks.  It wasn't any easier if you wanted a non-alcoholic drink, like water.

And let's face it: By 1 p.m., I'd had enough of standing in long lines.  So we exited Riverfront Park and headed into Troy to get a drink.  Unfortunately, the only place we found open at the time was Bootleggers, which was, understandably, mobbed.  Finnbar's is apparently closed now on Sundays, and The Confectionery also now doesn't open until 4 p.m. on Sundays.  I guess I can't argue if the reason is that business is historically bad on Sundays at these places, but even so, it would have been a great idea to open early on the afternoon of Chowderfest and advertise that, luring people in for a drink or lunch.

I only mention these issues because I think this is a potentially great event--unique, fun, and a good bit of advertising both for the city of Troy and the restaurants participating in Chowderfest.  I'm not sure, though, that I would bother to return next year if it's run the same way as it was this year.

Without further ado, here are my thoughts on the six chowders I did sample this year: 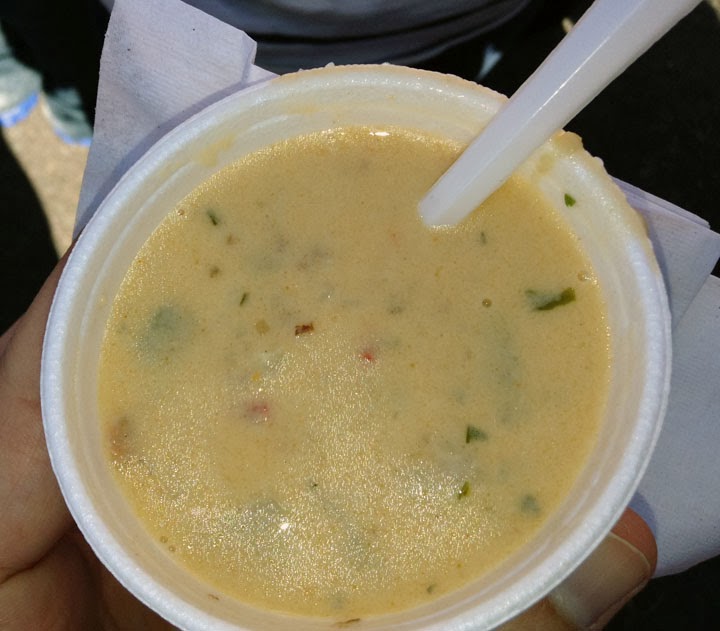 I'll admit, we were a little disappointed to find Illium had already run out of their Apple & Pork Belly Chowder, but this seafood chowder didn't disappoint.  Some servings included rather large pieces of lobster, which was a huge bonus, and the broth was full of flavor.  Despite some potatoes that seemed a bit undercooked, this earned the top spot on K's ballot, third place on mine. 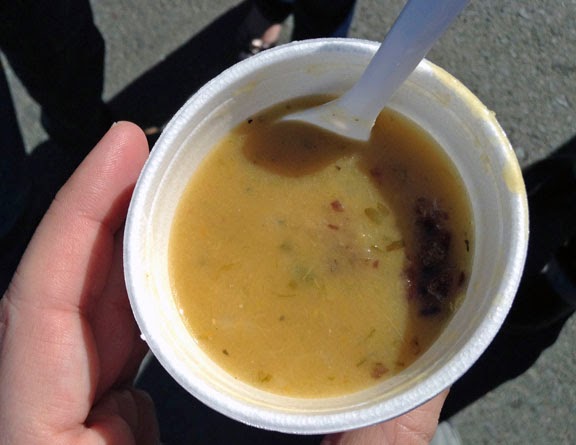 The description alone was intriguing with this one, and somehow, despite all these details, they didn't include that there were some dried pork cheek crumbles also added to this chowder!  The bacon-like addition added some good flavor to this chowder that seemed sort of unbalanced.  I didn't really detect the beer, and the texture was thin despite the coconut.  It also seemed a little overly sweet.  A good idea, but not one of my top three. 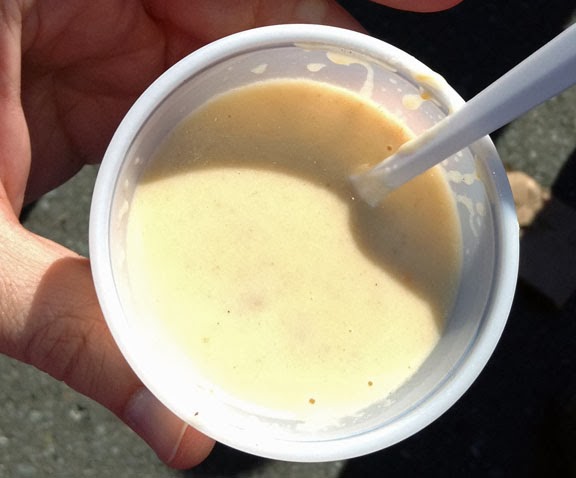 I like Finnbar's.  Their pub is quite nice inside, they've got a good beer list, and the pub grub there has been above average, in my experience, and some of it has an authentic Irish twist.  Unfortunately, here at Chowderfest, we got the last of their chowder--those parts spooned from the bottom of the pot, so most of the shrimp and whitefish had already been scooped up.  The flavor of the broth, however, was quite good. 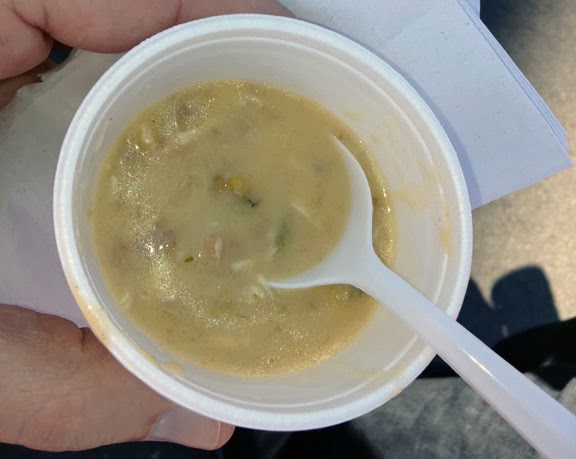 What makes a clam chowder Cuban?  Beats me.  There was no description on the ballot, though I remember a mention of chorizo at the tent.  Nothing really stood out to me about this chowder, either.  It featured some chicken and the broth was quite thin.  The chorizo was only slightly noticeable. 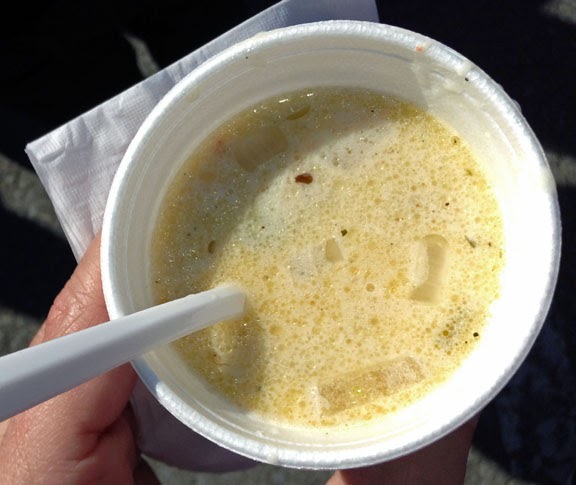 I'm always down for some cheddar beer soup, so I was pretty excited for this one.  The balance was a little off on this one, though.  The cheese was overly prominent (I never thought I'd be complaining about too much cheese!) in my opinion--too strong and rich--while K found the beer taste to be kind of strong.  It was also pretty thin, not something I'd expect from this kind of soup, and the crab was sort of lost in the shuffle. 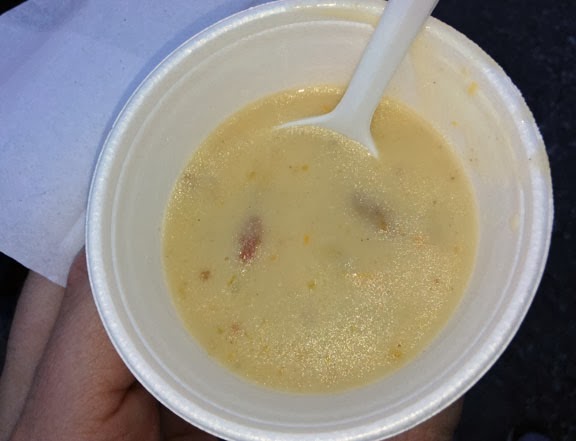 I was interested in this one from the start and used my last ticket of the day on it.  Strangely, at 1 p.m., with many tents already closed, most of the remaining lines were really long, but I pretty much walked right up to the Mallozzi tent and got the autumn pear chowder immediately.  I was a little skeptical of how the pear would be incorporated here, but it worked beautifully.  That flavor paired really nicely with the maple syrup that was added for sweetness; overall this was easily the most well-balanced chowder I tasted, a particularly successful non-traditional take on chowder.

As it turns out, I was in agreement with Chowderfest's judges, who gave the Autumn Pear Chowder first place overall.  Good call!
Posted by Masticating Monkey at 12:56 PM

Email ThisBlogThis!Share to TwitterShare to FacebookShare to Pinterest
Labels: Eating out, Events