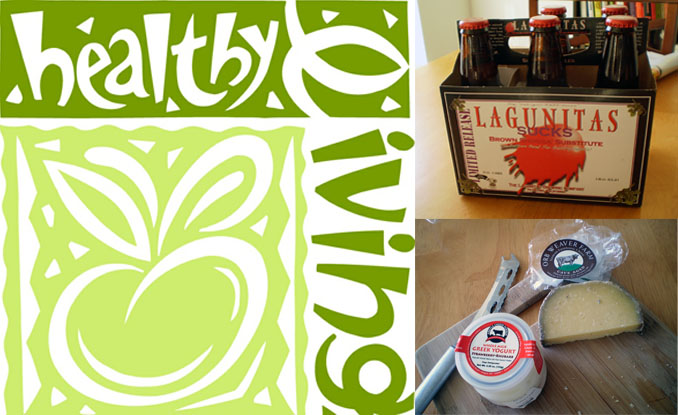 I'm eager for the day (year?) to arrive when Whole Foods finally opens its doors in the Colonie Center.  But until then, I'm happy that a similar type of market has emerged at the Wilton Mall in Saratoga: Healthy Living Market.

From where we reside, Healthy Living Market's not exactly convenient--it reminds me of when we lived in Ohio and would drive about 40 minutes to Akron and pick up stuff at Mustard Seed Market.  We'd always try to make a day of it, shop and work in a cafe and walk/hike on a trail that wouldn't leave us too sweaty for the rest of the day, and I imagine that might be what we do once in a while with Healthy Living Market.

Upon our first visit there, we were also reminded a lot of a similar market, Earth Fare, which was about a 10-15 minute walk from where we lived in North Carolina last year.  I sure miss that convenience, I'll admit: taking a leisurely stroll around the curvy, hilly roads of our neighborhood, and then stopping by Earth Fare for some cheese, snacks, or prepared foods.  Sure, we had to then basically climb a mountain with our bags in tow to get home, but it worked out well and limited how much we could buy in one trip.

But enough on that; this post isn't about nostalgia for Boone--I'm saving that for another day--it's about the many little things about Healthy Living Market that make it a fun place to stop when in the area.

I would like it if I could buy all my groceries at a place like Healthy Living Market (or, for that matter, at the Honest Weight Co-op in Albany), but that's just not realistic.  I can understand people's complaints that the products sold at these types of markets--from meat and seafood to produce and packaged goods--is on the pricier side of things, but I'll also say this: in many cases these items are much better quality than what you can get at supermarkets, and not always that much higher in cost (Hannaford and Price Chopper strike me as quite expensive compared to other grocery stores around the country).

But even if you're not planning on doing all your shopping at Healthy Living Market, that doesn't mean it's not worth visiting once in a while for a more modest haul, especially on products that are hard to find elsewhere, particularly in one location.  So after one visit, here are some reasons why I like Healthy Living Market: 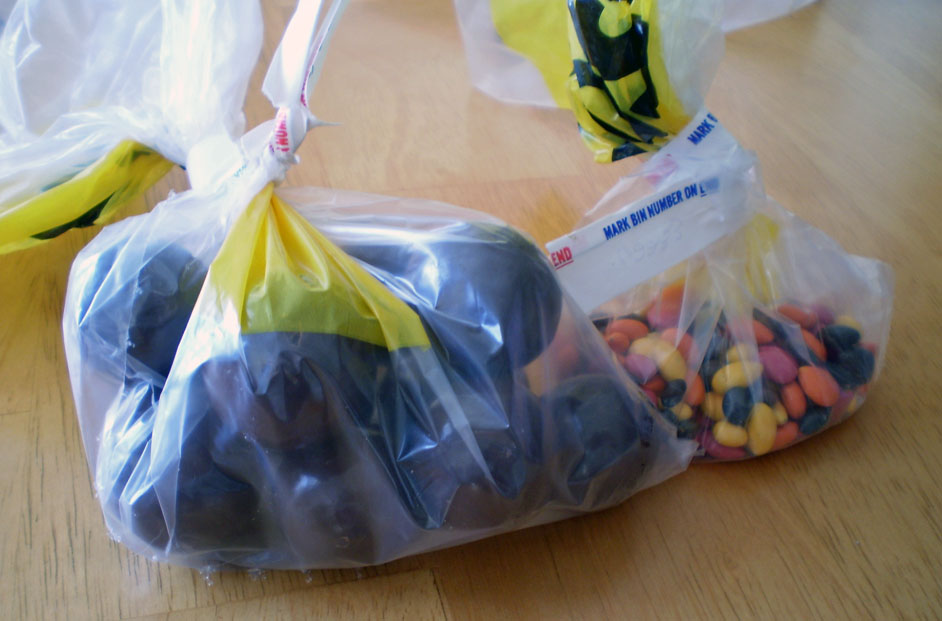 On your left: chocolate and peanut butter malt balls.  On your right: candy-covered sunflower seeds.

Maybe these aren't the best examples of bulk products you can get at a place like Healthy Living Market.  You likely know the other types of things available at a place like this--from the spices to granola to local maple syrup and honey.  Rice, beans, legumes--all very useful stuff in bulk.

We also got spices.  We'd been short on paprika and ancho chile powder for a while; these smelled good and fresh in their jars, so I got a bit of each.  And K found some berbere, which is awesome.  This is an Ethiopian spice blend, and sure, you can make your own (as K did years ago), but it's much easier to get it pre-mixed, so long as it's a good blend.  After tasting the doro wat she made with the berbere on Sunday night, I can report that it is indeed a good blend, and a nice little way to get your Ethiopian food kick if you're in a town like Albany that doesn't have such a restaurant. 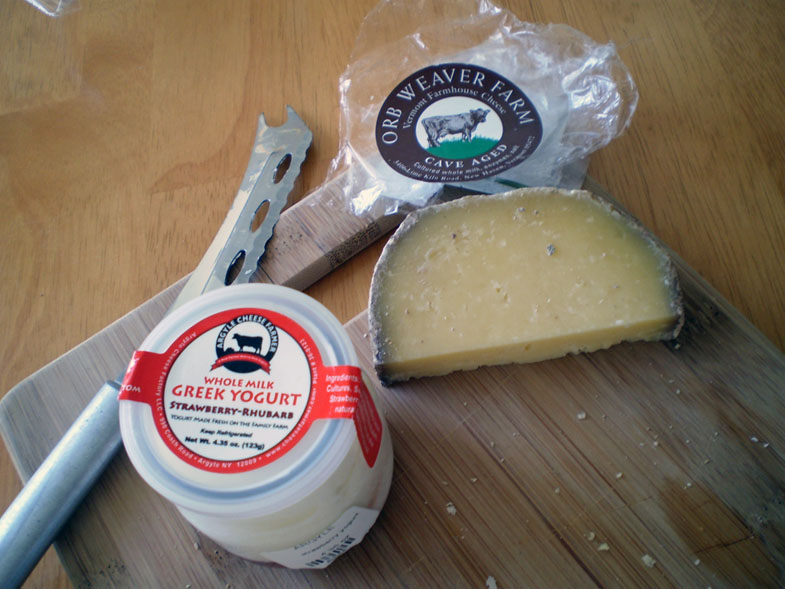 There are some good options for cheese in the area.  I'll give a shout-out to The Cheese Traveler, which is great with its huge variety of cheeses, the welcoming nature of the staff, and their willingness to slice off samples.  But I'll admit, I'm not in the DelSo area as often as I'd like--it's just not very convenient to where we live or work--and I also like the possibility of just picking up some cheeses on the fly while shopping for other stuff.

Trader Joe's fits that bill, but their cheese selection isn't all that extensive.  But Healthy Living Market has a great, wide-ranging variety of cheeses available, featuring many local sources, like the Cave-Aged Cheese from Orb Weaver Farm in New Haven, VT, shown above.  Maybe my favorite aspect of the cheese shop at Healthy Living Market is the basket of small cuts of several of their cheeses.  Instead of asking for a sample, you can take home a small triangle of cheese, savor it, see if you like it, and only spend a dollar or two on each piece.  We got a few of these, and it's a great way to try new varieties.

They also had this adorable little jar of Greek yogurt from Argyle Farm, one of the Washington County Cheese Tour locations we didn't make it to last fall.  Judging from this yogurt, which is thick and creamy and tart, we might want to pay them a visit this September.  But I don't want to think about fall just yet. 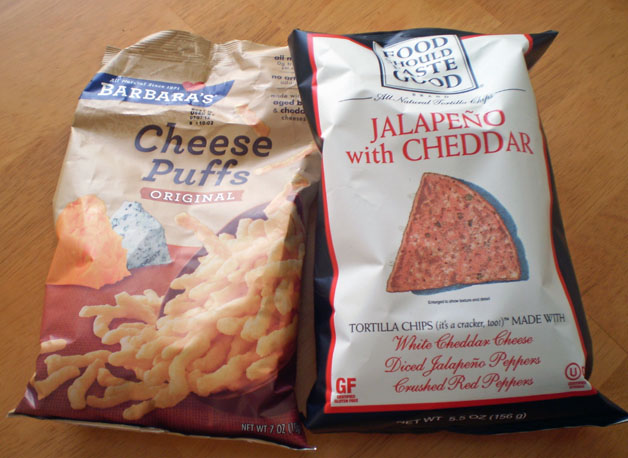 See how a name like Healthy Living Market can seem ironic?  Look at what I've covered so far: candy, cheese, and cheese puffs.  Not healthy!

But good.  And as I said above, it's great that you can get so much good stuff in one spot.  I can't yet vouch for the Jalapeno with Cheddar tortilla chips shown above, but we did discover Barbara's Cheese Puffs last year at Earth Fare, and they make for a delicious treat.  They're crunchy and possess a cheesy flavor that's just worlds better than the fake-tasting stuff that'll cling to your fingers from regular supermarket brands.  Those brands do not use aged cheddar and blue cheese; Barbara's does, and you can taste it. 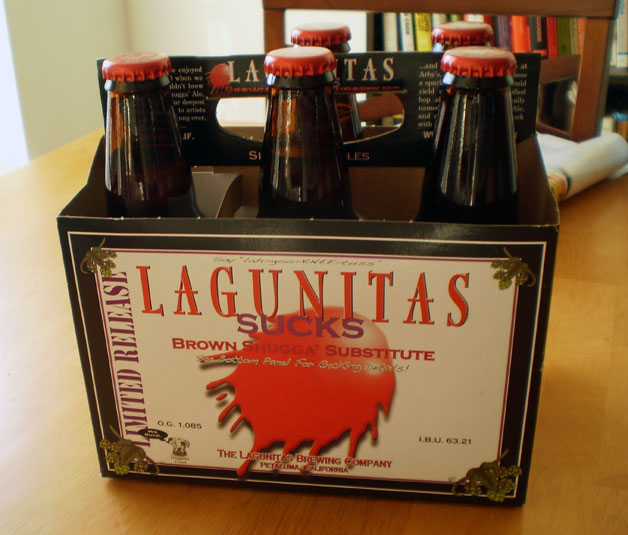 Judging from what's already been written about Healthy Living Market, I knew they carried good beer.  But I did not expect to see a six pack of Lagunitas Sucks there, not after lamenting its seasonal passing while showering it with praise last week.

And the prices for beer seem fair; the Lagunitas Sucks was just $9.99, and across the board everything seemed comparable to what you'd pay at any regional beverage center.  Of course the variety won't be as extensive at Healthy Living Market, but they carry a lot of good stuff, from West Coast heavyweights like Firestone Walker and Lagunitas to regional favorites like Ithaca to prized Belgian import Trappistes Rochefort.  I'm pretty sure they don't offer singles or allow you to break six packs; nevertheless, the quality of beer you'll find here is better than any of the traditional supermarkets around Albany.

But I was focused all on the red splat of Lagunitas Sucks.  In fact, I probably wouldn't have even bothered to write this post if it weren't at the market. 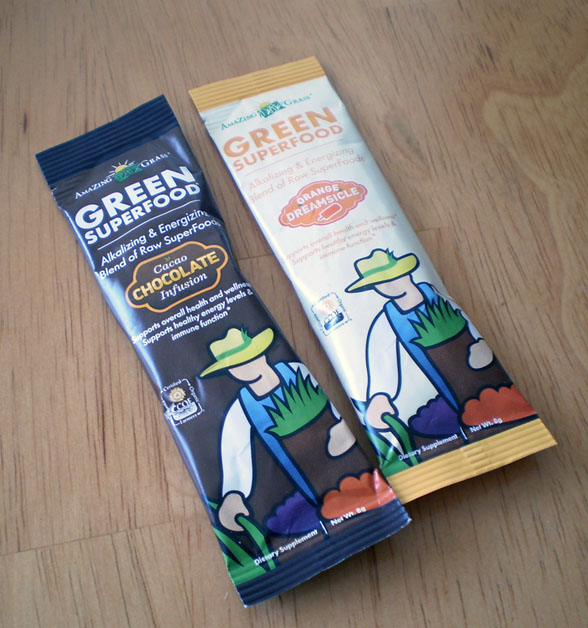 You walk around the aisles of a place like Healthy Living Market slowly enough and you'll come across some interesting stuff that you just don't see at your average grocery store.  Sure, you'll see protein powders and that sort of thing, but look at these cute little packets of Green Superfood above; these were on sale for 99 cents each at Healthy Living Market, a great way to sample something that could be gross.  I don't know--I haven't tried it yet--but these types of things can sometimes be unappealing.  And if these are good and I can get back to Healthy Living Market in time, a 30-serve container of the superfood is currently on sale for $20.99.

There are some ridiculous, unnecessary items on the shelves at Healthy Living Market, too, like the Cuppow, which turns a regular Mason jar into a Mason jar with an absurd travel lid.  You most certainly don't need this thing, but you might have fun staring at it for a few minutes when you spot it on the shelf.

Maybe visits to Healthy Living Market aren't necessary, especially if you don't live in the Saratoga area, but they certainly can be a source of pleasure and a way to pick up some good and interesting food and drink.  Supermarket shopping can too often be dull and boring--going through the motions to pick up the same old stuff at the same old places.  I think it's worth an occasional trip out of the way to help break up that monotony.

Healthy Living Market is located at 3065 Route 50 in Saratoga Springs, NY.
Posted by Masticating Monkey at 11:01 AM