In Need of Some Pancakes to Go with that Maple Syrup 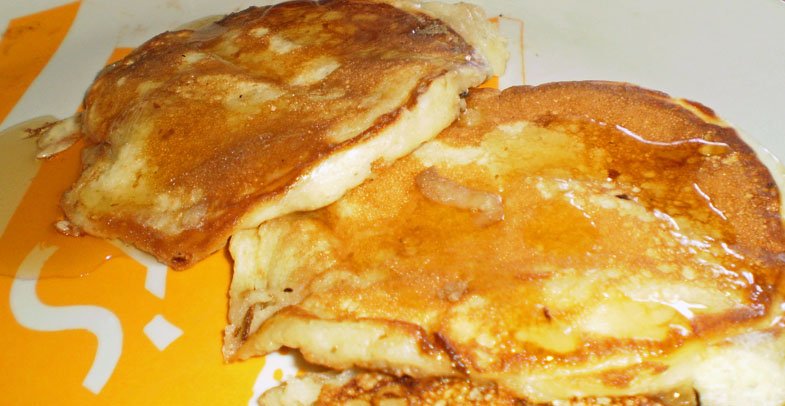 So I've had maple syrup on my mind a lot lately.  I interviewed a couple local sugarmakers for my recent maple syrup article for All Over Albany, which I recommend reading if you haven't already not just because I wrote it, but because these two guys I talked to were so generous with their time and had a ton of interesting stuff to say.

I not only talked to these maple syrup experts, but I also read a little about sugaring so I didn't come off as a complete rube when it came to the process and science of it all.  And when it was over, I'd restocked my pantry with a nice jug of Grade A medium amber maple syrup from Bulson Road Natural Sweeteners (this is the product made and sold by Mark Cipperly of Capital Agway).

I was ready to try that syrup, and while there certainly are ways in which you can use syrup that don't involve breakfast, for me there's no better way to enjoy it than on pancakes.  And that's especially the case with the best pancake recipe I've ever tried, one K introduced me to and which comes from a somewhat surprising source: Bruce Paltrow, the late film and television producer and father of actress Gwyneth.

Gwyneth is an easy target when it comes to food; she was sort of ridiculous hanging out with Mario Batali and Mark Bittman on their PBS show, Spain...On the Road Again, and her second cookbook, It's All Good, which comes out this week, has inspired articles such as "Why Gwyneth Paltrow's New Cookbook is a Hate Magnet." She's been going around talking about how she doesn't allow her family to eat carbs anymore, which is funny because her most famous family recipe is for a stack of carb bombs.

Whatever.  These are her father's pancakes--easy to make and so good they don't even need maple syrup.  (But of course they are better with the good stuff.) 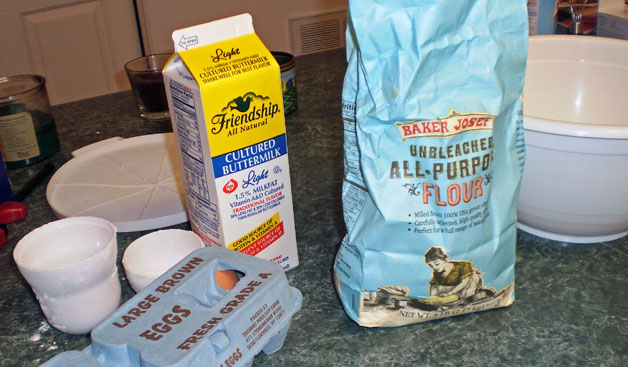 You may be of the mindset that you don't need a new pancake recipe or a pancake recipe at all.  We're talking simple, basic stuff here.  I get that.  And sure, I can still enjoy ordinary pancakes at a diner--I got over moving from Pittsburgh, where Pamela's serves the best pancakes in the country, thin and crepe-like with crispy edges--but when I eat them at restaurants now, I can't help but start thinking that we need to go home and make Paltrow's pancakes soon.

Before we get to the recipe, let's get back to maple syrup.  I found it fascinating the way sugarmakers talk about the differences in syrup color and grade and how those elements affect taste.  In the past, I think I'd mostly just tried light amber--"fancy," in Vermont--and maybe some medium.  We had a jug of Cipperly's medium amber syrup at home that I had yet to open, and while shopping in Hannaford one night K and I spotted a small bottle of dark amber syrup from Arnold Farm Sugarhouse in Maine.  It was relatively inexpensive--I wasn't about to have two large jugs of syrup around at the same time--and I was really curious to see the difference in taste between the two ambers.  Of course, the ideal taste test would be to compare two different-colored syrups from the same maker, but that wasn't happening this time.

One of the notable things about Bruce Paltrow's pancake recipe is that it calls for you to mix the batter up the night before and let it sit in the refrigerator for several hours.  I tend to forget about this until the last minute, so I've spent multiple Saturday nights cracking eggs and melting butter at 2 a.m., secretly hoping that some neighbors come home late from partying and look up from the parking lot and see this eccentric dude making breakfast. 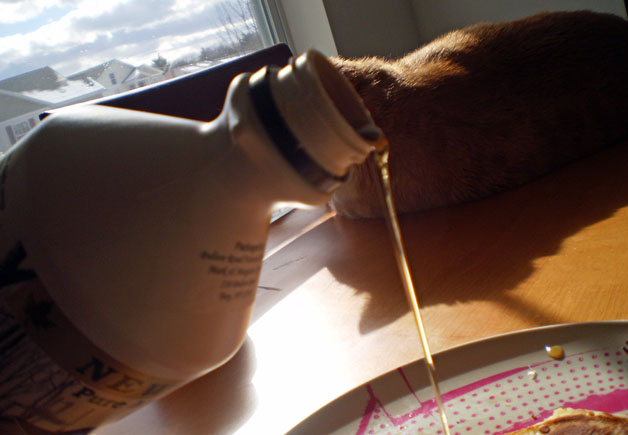 Here's a link to the recipe--it's from Gwyneth's first cookbook, My Father's Daughter, which, safe to say, people seem to like more than the new one.  I know mixing the batter the night before, as suggested here, can save you some time in the morning, but does it change the flavor or texture of the pancakes?  I'm not sure and can't seem to find any answers.  The batter here can get a bit gluey, but as the recipe indicates, if it's too thick just add a little milk in the morning.

These are buttermilk pancakes, and I've decided that there's something about buttermilk that really does make a huge difference in pancakes.  This is primarily in terms of texture, but I do think there's something about buttermilk that does shine through in these pancakes--it's not overpowering, and the pancakes aren't really sour from the buttermilk, but there is some depth of flavor there that you don't get without it.  The pancakes are simultaneously light and chewy.

Once the pancake mix was ready to go, I set out a little taste test for us to see if we could notice differences between the two syrups.  You can't really call it blind because yes, I guess one does look a little darker than the other.

Is there a noticeable difference in taste?  Yes--both of us would agree to that.  Cipperly's medium amber was definitely milder in flavor, as was suggested.  It was buttery and rich, but not overpowering when poured on the pancakes.  Sweet, but not cloying--really well balanced.

The dark amber syrup from Arnold Farm was also quite good, but different.  Not as sweet, not as buttery--I picked up hints of smokiness and burnt caramel.  Maybe, you could even say, it was a bit earthy or woodsy.  There's certainly a complexity that develops with the darker syrups--a byproduct of bacteria growth in the sap--but as I sat down with the syrups and pancakes in front of me, I had a really hard time deciding which to use. 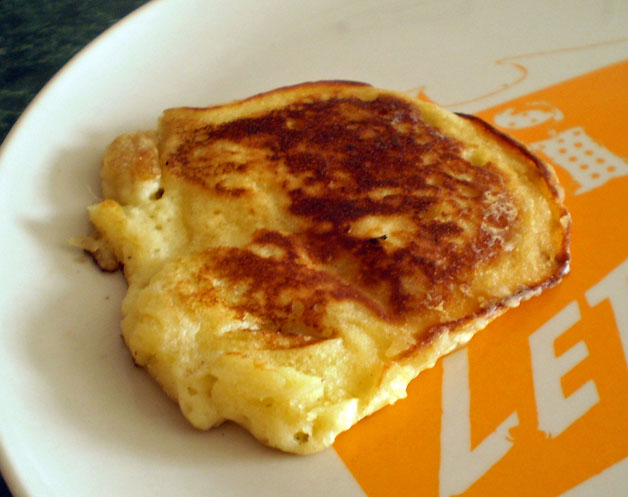 In the end, I ate way too many pancakes--I was basically full for the day--and ended up rotating between syrups as I plated one pancake after another.  I can understand why both sugarmakers I spoke to said they prefer dark amber syrups on their pancakes, but I also felt in the end that there's something to be said for the medium amber--that buttery nature works so well.  But was that partly because of Bruce Paltrow's pancake recipe, which provided an already-flavorful vessel for the syrups?

I have enough syrup left--I suppose I could try to answer that question.  Then again, that would mean making some ordinary old flapjacks.  And when I have some leftover buttermilk in the refrigerator, why not just use that up to make more of these delicious pancakes?

Posted by Masticating Monkey at 2:22 PM