Sometimes, K and I wonder if we get ourselves too excited by a restaurant on our first visit simply because they do a decent job with food that we haven't had--or had in decent form--for some time.  Revealing this excitement is a risk of reviewing a place after just one visit.

Fortunately, I can do whatever I please here on this little blog of mine, and I think it's only fair to return to restaurants and update how I find things with more context and more meals under my belt.  And that's what I'm doing today with Kinnaree Asian Restaurant, which I wrote about pretty glowingly back in September.

We've eaten there a couple times since that initial visit, and I'll get into those visits shortly.  But what also prompts this reevaluation of Korean food in Albany is the visit K and I paid to Mingle, a restaurant on Delaware Avenue in Albany that makes some seriously good Korean food to go with an interesting assortment of what might be called American cuisine.  That's what I mean in saying "more context."

I hate to say it, because they seem like nice folks at Kinnaree (and I'm sure we'll be back in time), but eating there within a couple weeks of having lunch at Mingle only served to amplify the differences in quality and execution at the two restaurants.  And it's funny--this change of heart comes right after Metroland published a laudatory review of Kinnaree (and less than a year after the Times-Union did the same, calling it "a bargain," which inspires some grumpiness from me at the end of this post).  I swear I'm not just trying to be contrary.

K and I knew about Mingle for a while, but we hesitated to go, knowing only the dinner menu, which raised a few eyebrows.  The Korean dishes especially stood out; a lot of these meals might be considered Korean street food, and while I didn't doubt that the quality and ambiance at Mingle would be better than at your average dive joint, we couldn't bring ourselves to pay $26 for Bulgokee, even if the meat was grass-fed.  We're not averse to paying higher prices for quality food; we just want--in addition to the quality ingredients, like at Mingle--to get innovative, complex dishes (like some of their non-Korean dishes).

As for lunch, I'll give credit here to Daniel B. for his All Over Albany review of the mid-day version of Dukbokki at Mingle.  The lunch menu and hours at Mingle are now up on their website, but either they weren't up earlier in the winter when I went looking for them, or I'm blinder than I thought.  Anyway, the Dukbokki article not only gave us the information we wanted about lunch at Mingle, but also provided some seriously tantalizing photos and descriptions. 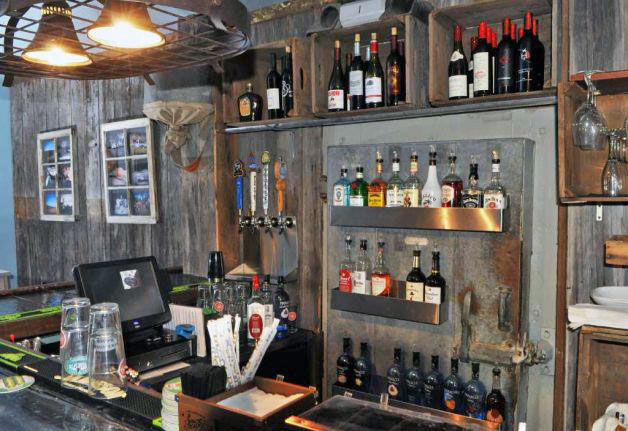 Of course, with lunch only served Tuesday through Friday at Mingle, K's and my schedules didn't allow us to actually get lunch there for a month after reading the article.  But we jumped on the first opportunity and were not disappointed.

We decided to try the appetizer serving of Mingle's chicken wings to start, but instead of the jerk wings on the menu, we asked if we could get the Gochu Wings, featuring the same sauce I'd eventually have with the Dukbokki.  These were listed as a dinner special on the chalk board hanging from the wall.  We were told this wasn't a problem--the wings took just a few extra minutes to throw together.  Mingle doesn't have a deep fryer, so the wings didn't have the great crunch of your typical fried version, but the flavor of the gochu paste was fantastic on the wings.  There was a lot of heat, I'll admit, but not too much to mask that rich red pepper taste.  The flexibility of the kitchen was much appreciated.

I went with the Dukbokki, and don't really have much to add beyond Daniel B.'s praise.  I'm a big lover of rice cakes--I'm also sort of obsessed lately with the Rice Cakes with Pork and Capsella at Ala Shanghai--and thought the rice cakes served as a great vessel for the gochu chili paste (just the right level of heat on the rice cakes) and slices of red peppers.  I'm going to want this every chance we get to visit Mingle, but will try to diversify (the Kimchi Jigae sounds tempting).

K went with the Chap Chae (with beef--the grass-fed Buckley Farms version served across the board at Mingle).  The slices of beef were not very tender--maybe they were cooked too long or not sliced thinly enough--but otherwise the dish was quite good.  The clear noodles were made of sweet potato, and the sauce had a salty, soy sauce-based flavor that's hard to describe but was ultimately quite good.


(On a side note, I was also pleased to find a handful of good beers in kegs, including the special selection of Crossroads' Outrage IPA.  It's always nice to try beers from a small, local brewery, and this one didn't disappoint; there was a nice balance between the citrus flavors from the hops and the malts used--heartily recommended, especially with some spicy food.)

For lunch, Mingle is more reasonably priced for these Korean dishes.  The Dukbokki is $11, the Chap Chae $13.  The space is gorgeous.  It's dressed up in a way that feels both very hip and modern but also cozy.  There's a small bar in one corner and lots of wood and metal and framed photographs around the space.  That counts for something.  And if occasion calls for a nice dinner out in Albany, I wouldn't hesitate to take guests to Mingle--though I probably would go for something like their Chilean Seabass or Pan-Seared Twin Duck Breast.

The space inside Kinnaree is nice enough, too.  But the food simply doesn't hit the high notes at the same level as Mingle.  Sure, I'll give them credit for having banchan, as I mentioned in my last review, which is more than can be said for Mingle.  But the banchan was pretty weak the second time we had it.  No potatoes, and the bean sprouts tasted like they'd been dressed by a drizzle of water, not sesame oil.  And bonus points for frying up some crispy chicken wings--we tried these to compare them to those at Mingle.  While the texture was excellent, the sauce wasn't so good--a sort of sweet and sour that just couldn't compare to the gochu at Mingle.

On our most recent visit, maybe a little jealous over my plate of Dukbokki at Mingle, K went with the Tteokbokki--is that another spelling for Dukbokki?--which featured rice cakes with beef and a chili sauce for $12.  The small slices of beef were fairly tender and a nice little addition to the dish, but overall the flavor just was nowhere near as satisfying as at Mingle.  This chili sauce was sort of like what we had with the wings.

We've also tried lunch from the Thai menu at Kinnaree, and here we go with the multiple Asian cuisines under one roof problem again.  I don't like this because I don't know many places that get multiple cuisines right (it's either one or none in my experiences).  It's been a few months, so I won't get into any details, except to say that we were pretty unsatisfied overall with the Pad Thai and Pad Nam Prik Pao, especially compared to just about every other Thai restaurant in the area (we've tried most of them).  Certainly nothing extraordinary, as described in that Metroland review.

Despite my excitement over a good lunch at Mingle, I'm still left frustrated on two fronts.  One, that despite the amount of ethnic food options in the area, there aren't many that are better than mediocre.  And two, that restaurant pricing in this area often seems to be out of whack with the type of food or setting in which it's served.

In Cheryl Clark's Times-Union review, she says that Kinnaree's prices work for the "thrifty" diner.  I'm not going to dispute that their prices seem fairly reasonable, but if you eat ethnic food--Korean or Thai specifically--in other cities, you'll generally find more bountiful meals featuring better ingredients, often with lower price tags.  Maybe Mission Chinese in NYC is a somewhat special situation, but you've got one of the most talked about restaurants to open last year, reviewed by the Times and every other media outlet in the city, with prices comparable to Kinnaree for much better quality and inventive meals.  That's just one (high profile) example.  I can offer dozens more from all over the country if you'd like more evidence.

There seems to be confusion amongst restaurateurs and reviewers alike as to what makes for reasonably-priced dining in the Albany area, be it burgers or Italian or traditionally cheap ethnic food options.  I should just shut up because I know this isn't a battle that can be won; overpriced dining options seem to simply be part of the cultural fabric of this place, and judging from the comments on some message boards out there, it almost seems to be a point of pride.  (And yes, I understand why Saratoga might be overpriced.  But Albany and its suburbs?)

I don't get it.  But I do know that Mingle makes some very good food for not-unreasonable prices at lunch.  It's a great atmosphere and the people there seem to truly care about making tasty food using well-sourced ingredients.  I only hope that my grouchiness on some fronts assists in illustrating just how good the food at Mingle seems to be--a proclamation I hope I don't feel a need to update anytime soon.
Posted by Masticating Monkey at 10:55 AM