Hearing last week that the new Japanica Grill in Troy was serving actual ramen, K and I didn't want to wait around and see what others had to say about this place--we wanted to just get in there and try it for ourselves.

Here's a not-so-secret bit of information: we both really like ramen.  Many people may associate ramen with poor students living off their pocket change packages of Top Ramen.  But real ramen can be a delicious treat, the varieties of broth capturing a wide range of flavors, the noodles at once both delicate and chewy.  We've tried some of the great ramen available in little shops in New York City, and can even attest to the quality of some packaged ramen available in Asian groceries and even some supermarkets.

So the ramen is what drew us into Japanica Grill.  We expected others to be checking out the new restaurant, but when we visited last week for dinner, there were no other diners present (another pair came in while we ate).  The location is tucked away on 6th Avenue on the ground level of the new City Station multi-development project, which has a few additional storefronts but mostly will serve as graduate housing for RPI students.

Maybe the construction on 6th Ave. is hurting business for now at Japanica, but I'm afraid that's not the only problem we noticed on our initial visit.  While they are doing a few things well, there are problems we encountered that make our return doubtful, and, I think, the overall success of the restaurant questionable.

I may have no business dispensing advice on how to make a restaurant successful, but I can't help it: a place like Japanica Grill has so much potential, but I'm afraid it's all going to be squandered.  So here are some thoughts we had after our initial meal there and how things can be improved.


When we arrived, it wasn't even six, and the place was empty.  After we placed our order for two different ramens--there are four available on the menu--we were soon after informed that there was only enough for one bowl.

We'd already figured out our order, building it around the reasonably-priced bowls of ramen ($9.50, I believe); we also decided to try an order of shrimp and vegetable tempura and the sashimi appetizer.  Most dishes on the menu were in the $18-$25 range, and we weren't prepared to spend that much in addition to what we'd already ordered.  Still in the mood for noodles, we went with a plate of the spicy chicken noodles for under $10 (or something like that--we found no takeout menus, and there's no information available online about the restaurant, so I can't confirm the names/prices of dishes) instead of the second bowl of ramen. 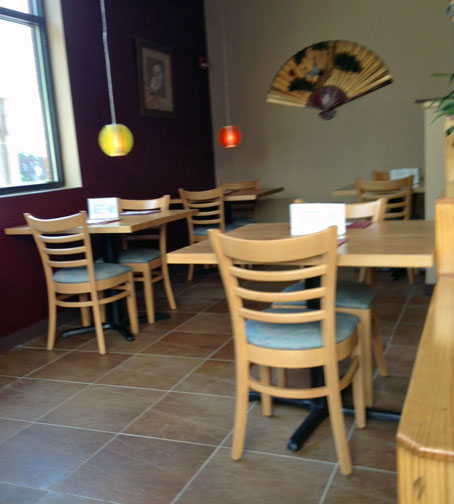 The two other diners who arrived during our visit inquired about the ramen, too, but were told that Japanica was all out of it--so there were at least three sad patrons in the restaurant that night.  Maybe the chef didn't expect the ramen to be so popular--he was smart to put it on the menu, considering it's not available, to my knowledge, anywhere else in the region--but the last thing you want to do is run out of a featured item on what's the first visit for many of your customers.

How was the ramen?  It was good, but not exactly special.  The one we got was pork-based, though the pork in the broth was clearly just a piece of ham.  There was a nice amount of toppings to mix in, including some thick slices of shiitake mushrooms.  The broth had some depth of flavor, but we mostly tasted the strong notes of star anise.  It was reminiscent, in fact, of Chinese tea eggs.  We're fond of these, but K didn't love the way the star anise, cinnamon, and clove flavors took over the ramen broth.

2. Cater the menu more to the local student population


Considering Japanica is part of the City Station complex, you could say that they literally share space with the RPI campus.  And with the student population at approximately 7,000, there's a serious market to tap into there.  But the menu at Japanica Grill simply does not fit the financial situation of most students, undergraduate or graduate.

I can speak to this from experience, having attended grad school at the University of Pittsburgh.  Carnegie Mellon was right down the road from us; both are urban campuses similar to RPI.  There were a few Asian restaurants that were frequented by many students from both colleges, and these restaurants all made a concerted effort to have lower cost items on their menus while not sacrificing quality.

The restaurants I'm thinking of include Oishii Bento, Lulu's Noodles, and Orient Express.  These places weren't all great--Oishii Bento was quite good, but the others just pretty good--but check out the menus available on those links.  There's a ton of variety, and there are so many options for under $10.  All of these places were consistently packed, and while there are more students in that part of Pittsburgh than in Troy, I don't doubt that you could get a lot of RPI students and other young locals into one of the aforementioned joints if you dropped them into Japanica Grill's location in the Collar City.

I don't think this means Japanica would have to scrap their whole menu for more casual; you can still have sushi, but maybe price it a bit lower or offer more quantity.  The sashimi appetizer ($10) was quite good.  I was impressed by the texture and flavor of the fish--a sampling of two small slices each of salmon, tuna, red snapper, and white tuna.  They were just the right temperature to really bring out the flavor on the palate; you can tell the chef knows what he's doing.  Oishii Bento has sushi on their menu, too, but in addition to that they have a variety of bento boxes and bowls that span both Japanese and Korean cuisines effectively, all at prices easily affordable even for students.

3. Do a better job with the menu items beyond sushi and ramen


We're not speaking from a lot of experience here, but the spicy chicken noodles we had at Japanica were not good.  They were really oily--that was the predominant flavor--and the small chunks of chicken were cooked to the consistency of tire rubber.  For $9 or any price, this isn't the kind of dish that's going to inspire diners to return.

The shrimp and vegetable tempura was pretty good, but a few days later we went to Sushi Tei in Guilderland and got a much more exciting haul.  For $8, Japanica offered two shrimp (with the vein still in at least one), a small slice of zucchini, a slice of carrot, and a piece of broccoli.  Sushi Tei offered three shrimp, a slice of sweet potato, a piece of eggplant, and a slice of squash for $7.  There wasn't much difference in how they were cooked--all were nicely breaded with panko and lightly fried.  But Sushi Tei takes the battle in terms of value and the simple use of better vessels for tempura.  A carrot isn't the ideal texture (compared to a sweet potato), as it's pretty hard, and broccoli is just a weird vegetable to be fried up that way.


We also couldn't help but take offense to the hot sauce offered to us at Japanica when we asked for some to help give some additional flavor to those noodles.  Take a look: 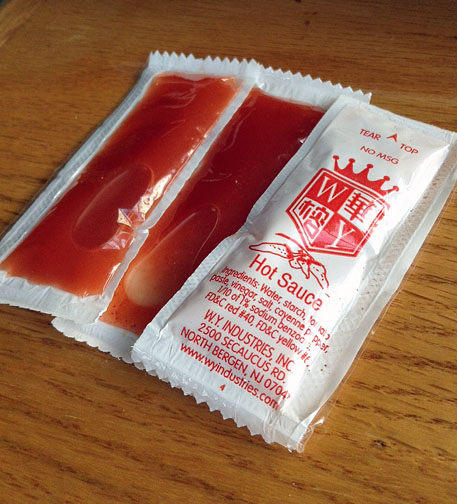 Compare this to the hot sauce provided at Ala Shanghai--a spicy and tasty blend of oil and chili peppers that seems to be made in house.  This stuff from Japanica was goopy--it had the texture of duck sauce and no flavor, really, just a little heat.  Maybe this was just a one-time, just-opened thing, but when presenting yourself as a pretty nice restaurant (with prices to match), serving these packets is kind of embarrassing.

4. Get your name out there

Like I said before, I can't confirm all the dishes on the menu--or discuss it in more detail--because there was no takeout menu and there's no online presence yet for Japanica.  The link to a website under their name is dead.

In this day and age, it really does help to have that footprint on the web--a website including the menu, a Facebook page, even a Twitter account.  And advertise a little more; I see they've advertised in the Troy Record, but that has a limited reach.  Cast a wider net online, run some special deals.  It's a little bit of a tough location right now, but they have a parking lot on the back side of the restaurant (entrance along Rt. 2/Ferry St.) and I think a lot of people out here are always looking for something new and interesting.

The bottom line is that we want to like a place like this.  The folks working there seemed nice and friendly.  They serve decent ramen and good sushi.  But what incentive do we really have to go back, other than the location being a little more convenient than Sushi Tei or Mizu Sushi?

I can't imagine how hard it is to open a new restaurant, all the challenges, both foreseeable and unexpected.  But I do know that, from a diner's perspective, there has to be something to draw in customers, whether it's quality, value, filling a niche, or some combination of factors.  And right now, I don't think Japanica is set up in a way to take advantage of their present situation in Troy.

Japanica Grill is located at 1521 6th Avenue in Troy
Posted by Masticating Monkey at 1:30 AM