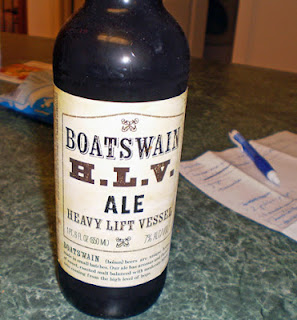 This was one of those impulse buys that I typically tend to avoid--there's only so much money to spend and beer to drink, so why not investigate before dropping some coin?  But the Boatswain H.L.V. Ale was at Trader Joe's, and of course it was cheap ($2.29 for a bomber).  This was my first trip to Albany's new TJ's store, only a few days after opening, so it was a zoo and this beer was an extra treat I grabbed at the end of the visit, only to store it for the past few weeks in my beer cave, a.k.a. bedroom closet.

The Boatswain line of beers seems to be exclusive to Trader Joe's, brewed by Minhas Craft Brewery (though on the bottle the brewery is listed as Rhinelander) out of Monroe, Wisconsin.  The name of the beer refers to a type of ship, even though Monroe is in the middle of the state, nowhere near Lake Michigan--which is almost as amusing as the fictional Westish College baseball team, of Chad Harbach's novel The Art of Fielding, being named the Harpooners despite also being located in Wisconsin.

I'm getting distracted here, probably because the beer doesn't lend itself to much analysis.  The H.L.V. Ale would be classified as an American Strong Ale, and it packs a little punch at 7% ABV and 80 IBUs.  K had a sip and was put off by the bitterness; I barely even noticed it, though that might speak to drinking more IPAs this summer than ever before. 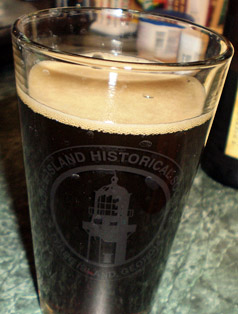 It pours a pretty dark shade of brown; the head held out for a bit, left a little lacing along the glass walls.  The taste is a blend of malts and hops.  While neither is weak, there's something about how they come through here: they just don't meld all that well.  And so you're left with a decent beer, one that I found myself getting pretty bored with, particularly once I stopped crunching on some tortilla chips.

There's nothing offensive about the Boatswain H.L.V. Ale, and for the price it's probably worth trying.  But I don't see myself grabbing another bomber of it.  There are more interesting (and inexpensive) beers at Trader Joe's than this one.
Posted by Masticating Monkey at 10:00 AM